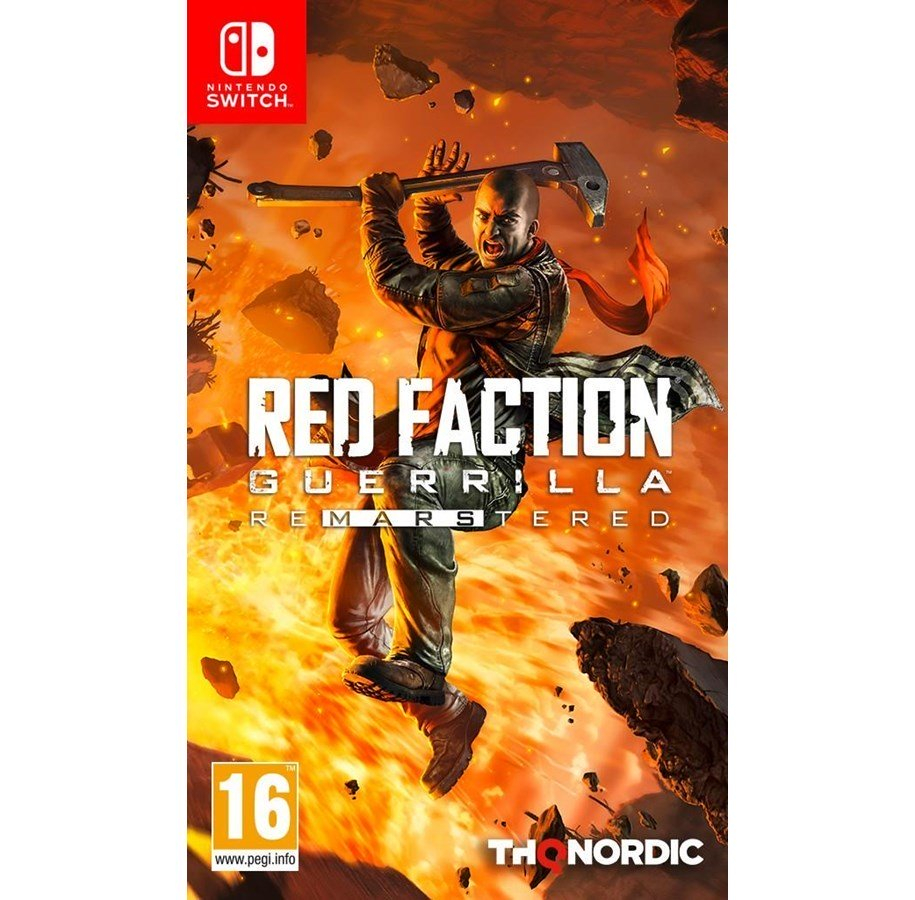 Product description
Set 50 years after the climactic events of the original Red Faction, Red Faction: Guerrilla allows players to take the role of an insurgent fighter with the newly re-established Red Faction movement as they battle for liberation from the oppressive Earth Defense Force. Red Faction: Guerrilla re-defines the limits of destruction-based game-play with a huge open-world, fast-paced guerrilla-style combat, and true physics-based destruction.

Key Features
Open World Guerrilla Warfare - You decide who, when, where and how to battle. Utilize guerrilla tactics, improvised weaponry, and modified vehicles to lead insurgent attacks on EDF targets. Launch attacks based on your own gameplay style, take on missions in any order you choose, or engage in destructive activities to weaken the EDF's grip on Mars.

Strategic Destruction - Use destruction to your tactical advantage, setting ambushes or chain reaction explosions to attack enemy strongholds and permanently modify the game environment. Leverage fully-dynamic physics-based destruction to improvise on the fly: blow holes in a wall or floor to set an ambush or escape, take out a staircase to stop your pursuers, or drive vehicles through blown out walls.

Evolving & Emergent Gameplay - Carve your path through an ever changing landscape as you improvise your combat tactics - mixing gameplay styles, vehicles, weapons and explosives to defeat the EDF.

Epic Sci-Fi Setting - Explore the huge, unforgiving Martian landscape, from the desolate mining outpost of Parker to the gleaming EDF capital city of Eos; then tear through the fully destructible open-world environments swarming with EDF forces, Red Faction resistance fighters, and the downtrodden settlers caught in the cross-fire. Multiplayer Combat - There is no place to hide when you put your guerrilla warfare skills to the test in a variety of highly destructive multiplayer combat modes.

Coolshop ok to order off? Never used them before

Yeah, they're cool
39 Comments
11th Sep
Thanks @Brutes. Been waiting for this to drop! 😁
11th Sep

Thanks @Brutes. Been waiting for this to drop! 😁

Nice, glad to be help mate
11th Sep
Thanks, bought, have some heat .
11th Sep
Coolshop ok to order off? Never used them before
11th Sep

Coolshop ok to order off? Never used them before

Anwone having trouble with payment?

Not for me, mine went through. Maybe try a different browser.
12th Sep
Nice one ordered.. Good price this
12th Sep

Interesting
12th Sep
Thanks OP, great game this back in the day. Bought for mobile playing
12th Sep
42p off with Topcashback.

Thanks @Brutes .... ordered.
12th Sep
Man! I loved this game. My favourite missions were the ones where you had to break your comrades out of prison. So much fun!
12th Sep
Thanks op
13th Sep
Voted hot but going to give it a miss as I've got a big backlog of games and I know I won't get round to this.
13th Sep

Anwone having trouble with payment?

Yeah iv tried two different payment types and it still won't go through. I guess I'll just wait for another shop to have it on discount for me to buy this one.
13th Sep
Couldn't resist that price, never did finish it on 360. Thanks op!
13th Sep
just purchased, thanks poster
13th Sep

I also have a big backlog but I'm of the opinion, just one more won't hurt will it? Lol. It's a great price, cheapest by about a tenner and I've always been interested in this. At this price it was definitely my biting point and I will definitely look forward to playing this, whenever that may be....heat for the poster
14th Sep
How different is the Switch version to the original version? I can imagine the remaster being great on PS4 and XBone, but not so much switch.

Whatever the answer though, it's a great game at an amazing price. And portable too.
14th Sep
I really enjoyed this on the PS3, back in the days and even Armaggedon was fun. Great series
16th Sep
Thanks used points and got it for £10
16th Sep
Anybody received theirs yet? I ordered late on the 11th (so call it the 12th). My order says it shipped on the 13th, and by Royal Mail. It didn't arrive today, and I don't think RM provide any 4 (or more) day delivery services !
16th Sep

I ordered on the 12th, received dispatch email next day. I think there are slight delays with royal mail as expected. I'm not worried though, since it is Coolshop, they've always been great.
17th Sep

same issue I have been in contact with custome support. I can't seem to get it to work at all.
18th Sep
Anyone received yet?
18th Sep

Still waiting myself unfortunately - it does seem quite slow. On the coolshop website it mentions it can take 2-5 working days, so if shipped on Monday, it could be next Monday by the time we receive it
18th Sep

I wonder if they sometimes ship from Denmark Couldn't see any warehouse location info on their website
19th Sep
Is this site trusted and it ask only for card not paypal
23 h, 2 m ago
Hmm i. Ordered 8 days ago...still no despatch
20 h, 22 m ago

I received a dispatch last Monday after ordering last weekend. If you still haven't received a dispatch, log into Coolshop and on your orders page It has a status on the item whether the item has been dispatched. If not make a note of the order ref and use their live chat service to find out what the delay is
20 h, 21 m ago

I've used them a couple of times and never had any issues previously.
19 h, 32 m ago

Yes, coolshop is a trusted merchant I have bought from them before, just don't remember delivery raking this long