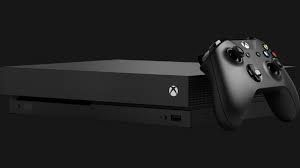 FOR THE PEOPLE THAT BROUGHT THE CONSOLE OFF EBAY:

NOTE: The eBay argos team unfortunately can't replace or repair the items if they are faulty. However they will provide a Full refund if the item is sent back with a fault up to 12 months. This is very good news, make sure you keep the box in the same condition and keep all the inserts and wrappers.

Games play better on Xbox One X. With 40% more power than any other console, experience immersive true 4K gaming. Blockbuster titles look great, run smoothly, and load quickly. Xbox One X also works with all your Xbox One games and accessories as well as Xbox Live, the most advanced multiplayer network, giving you more ways to play.

Unleash 6 teraflops of graphical processing power. Games play better on Xbox One X than they ever have before. Maximize game performance with the speed of 12GB GDDR5 graphic memory. And see every frame with 326 GB/sec memory bandwidth.

Experience premiere sound that puts you in the centre of Spatial Audio.

Stream and record game clips in 4K at screaming-fast 60FPS.

You can only play 4K games like Forza Motorsport 7, Super Lucky's Tale, Crackdown 3 and Sea of Thieves the way they're meant to be played on Xbox One X (games sold separately).

All games look and play great on Xbox One X but select titles are optimized to take advantage of the world's most powerful console. These games are Xbox One X Enhanced.

Play with the greatest community of gamers on the most advanced multiplayer network with Xbox Live (Online multiplayer requires Xbox Live Gold). Find friends, rivals, and teammates in the best global gaming community & compete, connect, and share across platforms with gamers on Xbox One and Windows 10.

Compatible with everything Xbox One - all your Xbox One games and accessories you've got now work with Xbox One X plus you can easily bring along your Xbox Live friends, clubs, game saves, and achievements to your new console.

Catalogue Number 803/4858
PostTweetShare Share with WhatsApp Share with Messenger
Community Updates
EBay DealsEBay discount code
If you click through or buy, retailers may pay hotukdeals some money, but this never affects which deals get posted. Find more info in our FAQs and About Us page.
New Comment Subscribe Save for later
Top comments
2nd Jun 2018
Supposed to have bought a car seat for the new baby. Bought this instead. Wife is not impressed!
2nd Jun 2018
I bought me XBX from box damaged for £370, and what a bargain, 4k gaming is just awesome on these 4k console, love it, and for £303 you are getting a bargain, but a word of warning, once 4k gaming is seen, you cannot unsee it, you can't put that 4k genie back in the bottle and go back to 1080p.

Heat, but not from this console. it's always cool and quite.
138 Comments
2nd Jun 2018
30 days free return, with 12 months of Argos Warranty is amazing. If there's even a slight issue, they'll send you a brand new one, no hassle.

Yh. Argos have the best customer service. But you can't just lie to them. It has to be a genuine fault.
2nd Jun 2018

They carry a 2 year warranty with microsoft and they were released 12 month ago
2nd Jun 2018
Wow. Just remembered that I can't justify buying one, but that's hot.
2nd Jun 2018
I bought me XBX from box damaged for £370, and what a bargain, 4k gaming is just awesome on these 4k console, love it, and for £303 you are getting a bargain, but a word of warning, once 4k gaming is seen, you cannot unsee it, you can't put that 4k genie back in the bottle and go back to 1080p.

Tempting, is it a big improvement on the One S?

Yeah, go to digital foundary on YouTube they do comparisons on many games.
2nd Jun 2018

Seller refurbished. An item that has been restored to working order by the eBay seller or a third party not approved by the manufacturer.

Refurbished With a 12 Month Argos Guarantee

Sounds like Microsoft warranty wouldn't work.
2nd Jun 2018
This is a nice price. But just can't bring myself to make the purchase. The ps4 pro was fairly disappointing in results, that I don't think it's worth the hassle for the Xbox one X.
2nd Jun 2018

At some point i will replace that external 1tb with a 2tb just to calm the OCD in me, but it is not a major issue at this time as i am enjoying Diablo 3 and Skyrim in glorious 4k, love it.
2nd Jun 2018

The pro is a nice machine and i really enjoyed GOW, gob smacking game and a work of art, but apart from the few other exclusives that support the pro i have not even bothered with it other than with PSVR gaming which it does very well indeed, loving the Pro as a VR machine, this is my VR go to machine now, love it, my rift is in a box these days as apart from the surfing and checking hotdeals it is not on much now, so that GTX1080 i bought at xmas really is paying for itself. lol
2nd Jun 2018
Thanks op, wife is going to kill me
2nd Jun 2018

Don't work for Microsoft do ya?

Xbox one x is superior to the pro.

halo 5 and gears of war 4 also look significantly better than base Xbox
2nd Jun 2018
Well that’s just knackered my Gumtree ad.
2nd Jun 2018
Supposed to have bought a car seat for the new baby. Bought this instead. Wife is not impressed!

Enjoy mate! Money well spent.
2nd Jun 2018
Bought 2 at this price !!!
2nd Jun 2018
I was holding off on the s deals but this tipped me over the edge for the x. Just waiting for BT to sort out my FTTC speed (hopefully in time for the world cup) then I'm fully 4k! Good times, cheers OP have some heat.
2nd Jun 2018
Good deal but the question is why are there a batch of refurbished units this early? Can't be that reliable can it?!

Also for ref from the item description:

This item is a professionally refurbished, A-Grade, Argos Manager Special - our top grade of refurbished item!

This product may have minor cosmetic marks or scratches. These will not hinder the functionality.

The item might have non-original accessories.
Edited by: "PhoenixWright2" 2nd Jun 2018