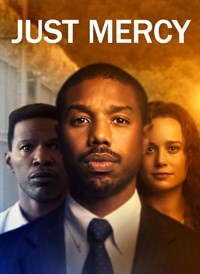 You can currently rent the film Just Mercy for free from the Microsoft Store. Simply sign in using your Microsoft account details and start watching.

A powerful and thoughtprovoking true story, “Just Mercy” follows young lawyer Bryan Stevenson (Jordan) and his history-making battle for justice. After graduating from Harvard, Bryan had his pick of lucrative jobs. Instead, he heads to Alabama to defend those wrongly condemned or who were not afforded proper representation, with the support of local advocate Eva Ansley (Larson). One of his first, and most incendiary, cases is that of Walter McMillian (Foxx), who, in 1987, was sentenced to die for the notorious murder of an 18-year-old girl, despite a preponderance of evidence proving his innocence and the fact that the only testimony against him came from a criminal with a motive to lie. In the years that follow, Bryan becomes embroiled in a labyrinth of legal and political maneuverings and overt and unabashed racism as he fights for Walter, and others like him, with the odds—and the system—stacked against them.

Lol why did you compare it dc movies?
2nd Jun
Great movie, I couldn't figure out why it wasn't up for a few Oscars given the previously nominated actors, subject matter and the Oscars trying to diversify.

Well worth a watch.
81 Comments
2nd Jun
Recently watched this without knowing the background.

Lol why did you compare it dc movies?
2nd Jun

All I can think of is that many of the actors also feature in the marvel universe movies... perhaps....?
2nd Jun
Nice one...Thanks.
2nd Jun
I can’t find a Microsoft app on my tv. Suppose I’ll have to watch it on the laptop... lame
2nd Jun
Great movie, I couldn't figure out why it wasn't up for a few Oscars given the previously nominated actors, subject matter and the Oscars trying to diversify.

Well worth a watch.
2nd Jun
Brilliant movie
2nd Jun
Not free on xbox one for some reason
2nd Jun

Not free on xbox one for some reason

Its weird how it says Owned, yet you click into it, and it only gives the option to pay more money.

Edit - figured it out.

Never bought or watched any digital content on Xbox store before
Edited by: "darkstryder360" 2nd Jun
2nd Jun
Very good film
2nd Jun
Showing as $3.99 when I click the link
2nd Jun
Sold my Xbox One, only got PS4 and Switch now. Also have an Android phone and a Chromebook. Which means I can't watch the movie without a VPN.
2nd Jun

Not on my Roku either, I guess the app is only on American devices.
3rd Jun
Excellent film & extremely topical.
3rd Jun
Showing free to rent on the US Itunes store
3rd Jun
Managed to get it on my xbox, think it is UHD as well
3rd Jun
Excellent movie. Well worth a watch
3rd Jun
How much does it cost if I purchase it through a UK PayPal?
3rd Jun

How much does it cost if I purchase it through a UK PayPal?

It should be free to rent if you click on the link, no need for any payment details.
3rd Jun

It is free to rent but I was considering about buying it too
3rd Jun
Argh, I keep being told to verify my identity but its just taking me round and round in circles
3rd Jun

Did you try switching it off and back on again.

I agree. I also watched Taxi Driver recently, which I found much better than Transformers.
3rd Jun

Tbh, almost anything is better than Transformers
3rd Jun

Basically, people say that Captain Marvel cannot act. This movie clearly says different
3rd Jun
Thanks for sharing, I was wondering if we would be able to get this in the UK when I heard about the offer.
3rd Jun
Great find.

Can't play it on Mac. Yet iTunes purchases can be played on Windows.

Is this a superhero movie...