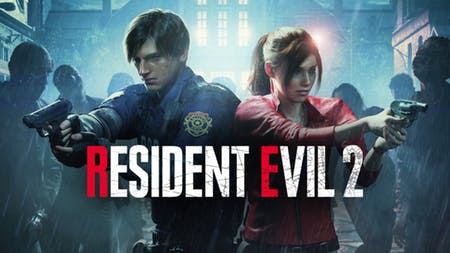 About this game
The city of the dead returns...

Relive the events of Raccoon City 1998 in glorious remastered graphics in survival horror RESIDENT EVIL 2 / BIOHAZARD RE:2. With this Steam key, players will experience a complete remake of Capcom's original sequel in the Resident Evil franchise - following the adventures of rookie cop Leon S. Kennedy and college student Claire Redfield.

CLASSIC HORROR, NEW ERA
Attempt to escape a city in the midst of a zombie apocalypse with flesh-eating zombies on the rampage at every turn. Witness an unparalleled adrenaline rush, gripping storyline and unimaginable horrors in over-the-shoulder third-person-shooter and melee action.

Fight or flee from Lickers, zombie dogs and mutated G-Virus monsters as you venture deeper into the unknown, and feel the fear as the dreaded Tyrant 'Mr. X' relentlessly pursues you.

STUNNING GRAPHICS
Featuring a combination of gameplay mechanics and camera style from the likes of RESIDENT EVIL 4 with the powerful RE Engine used in RESIDENT EVIL 7 - players will venture through a HD remastered Raccoon City and experience RE2 like never before.

SHOCK HORROR
Engage in close-quarter combat with flesh-eating zombies in dark and eerie buildings, hear your own footsteps (and potentially someone else's') as you nervously make your way down the next corridor covered in puddles and blood, and listen for the groans and moans of the undead army that awaits you.

WATCH THAT AMMO
Players will need to reserve ammo and medical supplies to survive the long night. Aim for the head and shoot whatever you can, or place accurate shots to kneecaps and limbs to disable enemies - and follow it up with a lethal combat knife attack.

YOUR OFFICIAL RESIDENT EVIL 2/BIOHAZARD RE:2 STEAM KEY GIVES YOU:


'SIMPLY SENSATIONAL' - CHECK OUT WHAT THE RESIDENT EVIL 2 REMAKE GOT RIGHT!

Fanatical about: RESIDENT EVIL 2 / BIOHAZARD RE:2Leon and Claire's fight is not over yet as the duo return in what is a huge upgraded version of the 1998 sequel. RE2 now features the immersive third-person, over-the-shoulder camera, enhanced graphics and detail, and hours of spine-chilling survival horror gameplay. If you played the original, it's well worth diving in again to experience it from a whole new perspective. Don't worry, Leon still has his classic parted floppy hairstyle!
PostTweetShare Share with WhatsApp Share with Messenger
Community Updates
Fanatical DealsFanatical Discount Codes
If you click through or buy, retailers may pay hotukdeals some money, but this never affects which deals get posted. Find more info in our FAQs and About Us page.
New Comment Subscribe Save for later
2 Comments
27th Nov 2019
£11.14 at Gamersgate. £11.88 at GMG. £11.99 at Indie Gala.
Edited by: "ThePointyEnd" 27th Nov 2019
28th Nov 2019

plus you get an additional 5 free games with GMG in the intel starter pack (most of which don't look great but there are a couple that seem decent.)