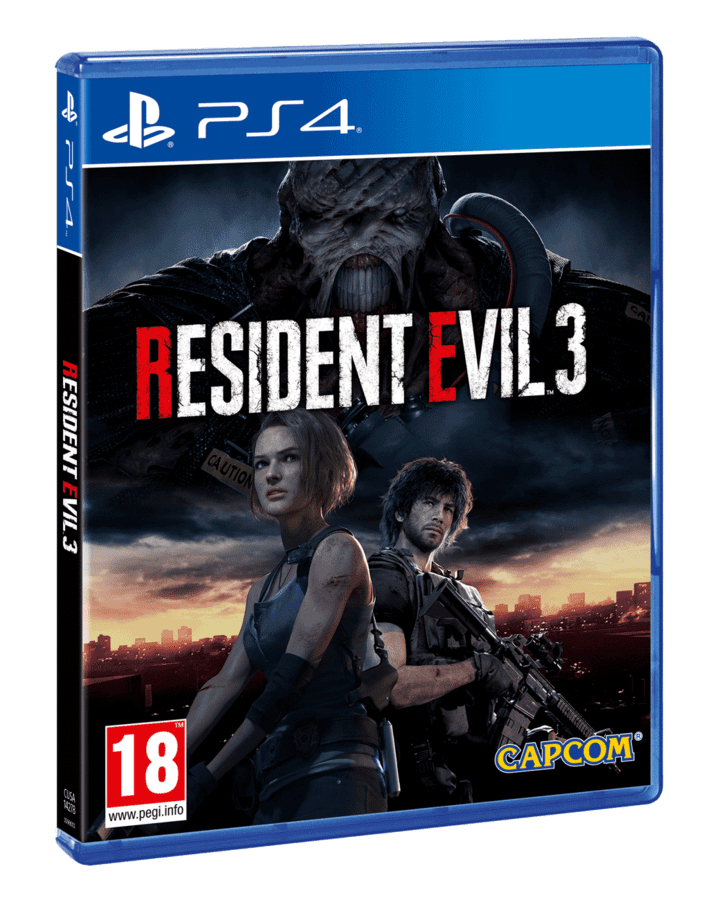 £34.85£36.795% Free P&P FreeShopTo Deals
Expert (Beta)25
Get deal*Get deal*
Expert (Beta)
25Get deal*Get deal*
Posted 14th May
A biological weapon developed by the pharmaceutical company Umbrella Corporation. The game marks the debut of Nemesis – a towering humanoid bioweapon designed for both brutality and high-functioning intelligence – whose dogged hunt of S.T.A.R.S. member Jill Valentine made him an icon of the Resident Evil™ series. Armed with an arsenal of high-powered weaponry and wrapped in a black suit to hide his mutilated features, Nemesis will maim, pulverize or destroy any obstacle on the path to his target.

Jill’s harrowing escape takes place in the panic-stricken hours leading up to and following the events of the acclaimed best-selling Resident Evil 2. Intense combat and puzzle solving combine to deliver the heart-pounding final chapter of Raccoon City’s collapse. The horrific settings from the original game and new content come to life as never before with RE Engine, previously utilized to create the acclaimed Resident Evil™ 7 biohazard, Resident Evil 2 and Devil May Cry™ 5 with high-definition graphics and modernized gameplay mechanics.

Complementing the action-packed single player campaign is Resident Evil Resistance, an asymmetrical 4 vs. 1 multiplayer game originally unveiled as a working title at Tokyo Game Show earlier this year. As the Mastermind behind the scenes, players can assume the role of key Resident Evil characters like Annette Birkin in a series of deadly experiments. Manipulate the environment and wield a deck of cards to place vicious creatures, set traps and weaponized security cameras to snare hapless Survivors. A first for the franchise, Masterminds can even directly control elite bioweapons like G-Birkin and Tyrant. In turn, four Survivors must effectively work together, making the most of a variety of weapons and each player’s unique special abilities, to stand a chance of escaping the experiment before time runs out.

Just like Resident Evil 2 (2019), the remake of Resident Evil 3 is a third-person survival-horror game. Players will have to manage scarce ammo and healing items as they struggle to survive.
PostTweetShare Share with WhatsApp Share with Messenger
Community Updates
ShopTo DealsShopTo discount code
New Comment Subscribe Save for later
Top comments
14th May
Waiting till it hits under 15 quid, still got shrink wrapped ps2/x360/ps3/wii games i ain't played due to hkud
Edited by: "MrCharlie" 14th May
14th May
For the average player this will take between 8-10 hours if you don't use a guide and play at a regular pace. The game is short but it is also fantastic.

I have no regrets about buying this game.
25 Comments
14th May
Waiting till it hits under 15 quid, still got shrink wrapped ps2/x360/ps3/wii games i ain't played due to hkud
Edited by: "MrCharlie" 14th May
14th May
Heat for the deal OP! However it's got a long way to go before I'll bite given the length of the game.
14th May

i did a speed run through the game when i played it last week. if i took in the whole game at steady pace it would be around 4 hours gameplay. if you speed run getting key items and taking down bosses(once you know the quickest way) i completed the game in. 1hour 20mins
14th May

Decent game but hugely disappointing. Not due to the length but the game as a whole.
14th May
For the average player this will take between 8-10 hours if you don't use a guide and play at a regular pace. The game is short but it is also fantastic.

I have no regrets about buying this game.
14th May
Rented this from Boomerang with a free trial. Completed it in a weekend, it’s short but there’s quite a bit of replayability but not enough to warrant £35 in my opinion.
14th May

It took me 7hr 30, but I am very thorough and take my time, also I sell games I buy at launch straight after completion whilst its resell value is high so I want to make sure I get a full thorough play through in
14th May

that's the same as me. i rented it also through Boomerang. i played it a total of 15 times making sure i did everything. even completed it on Hardcore mode with infinite rocket launcher. couldn't beat it on Nightmare on last boss so gave up. wasn't gonna tackle Inferno difficulty. anyway i posted it back yesterday
14th May
Wait for £20 and below folks. Way too short and the online mode is rubbish. Yes, it can be played through again but the same can be said of 200 hour RPGs so that argument doesn't really hold. For players who play through a game once and are done with it, this still isn't a good price.
Edited by: "SFP_NooDLe" 14th May
14th May
Based on all input, gonna wait for £25 price mark!
Loved demo and can’t wait to play this but too much backlog so no rush.
Lest hope next re-imagination will be better!
Anyone has any clue what they may be working on next?
Hope it’s Dino Crisis!:)
Edited by: "Lestat69" 14th May
14th May

Resident Evil 4 Remake. it's already been confirmed
14th May
Definitely wait for further price drop, way too short, completed <6hrs recently, no puzzles and single boss -Nemesis appears several times. Feels like Capcom couldn’t be bothered, condensed the campaign and rush it out.
14th May

Hasn't been confirmed. It's just rumours and rumours have been wrong before. Makes no sense for them to remake RE4 when Code Veronica is a far more suitable candidate.
14th May

Here's an article videogameschronicle.com/new…mp/ Seems to be on the way. Would love a code Veronica one though
14th May
Its a better price but it would have to be £25-£30 better I pick it up. That's about the right price for what is a shorter title with his one.
14th May

Thanks for info! 🙌
TBH, really hoped for Dino Crisis or Code Veronica but RE4 was phenomenal so can’t really complain!:)
14th May
I wasn't expecting another RE game out so soon after the last one they normally take a few years.

Gutted I sold my Xbox now I want to play this RE are the games that I like.

Really Is it that bad ? I only just found out about this release I am big RE fan love the RE 1 0 remake and 2 was pretty good to
14th May

The game is not bad at all, it just doesn’t feel as polished as RE2 and the length of campaign is really negative to consider before purchase.
14th May
under 25 please.
14th May

Resident Evil 4 seems to be up next
17th May