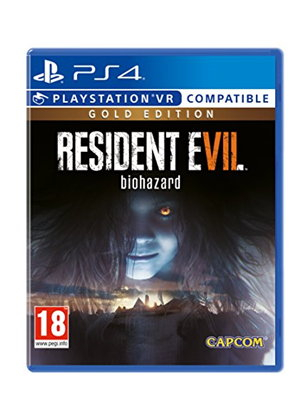 Back down in price beating Mymemory which is £13.99.Critically acclaimed Resident Evil 7 with all DLC packs.Includes
Resident Evil 7 biohazard sets a new course for the Resident Evil series as it leverages its roots and opens the door to a truly terrifying horror experience. The new era of horror.

Set within a sinister plantation mansion in modern-day rural America and taking place after the dramatic events ofResident Evil 6, players experience the terror directly from the first person perspective for the first time in the Resident Evil series. Embodying the iconic gameplay elements of exploration and tense atmosphere that first coined “survival horror” some twenty years ago, Resident Evil 7 biohazard delivers a disturbingly realistic experience that will define the next era in horror entertainment.

Is it worth the £3.85 more of DLC over the PS HITS version which is £9.99?
8th Jan
Playing this game now (purchased it previously from Base). Delivered quick.

Great game with some good scares!

I would say yes hence why I opted for this version than the standard hits. You have the 'full' game with all games scenarios and for only £3.85 more, make sense to go for this one
8th Jan

Season pass is usually £25 so yes. By the end of the game you'll be wanting some extra content as it's about 10h long, dlc adds a few extra hours.
Edited by: "ZeroBlitz" 8th Jan
8th Jan
Any one from me where the Banned Footage is in the menus? Can only find End of Zoe and and Not a Hero?