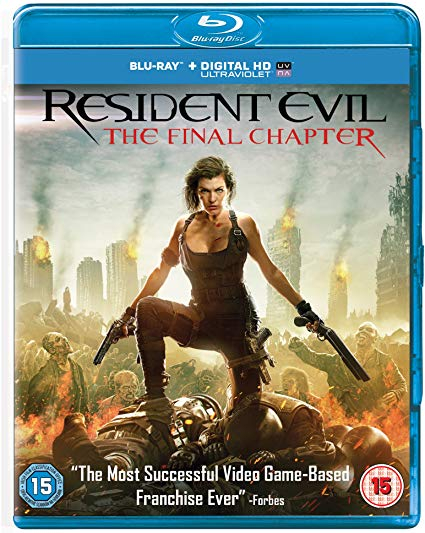 Two different sellers offering this for £2, fulfilled by Amazon:

Sold by: D & B ENTERTAINMENT
Sold by: NextDayEntertainment

Picking up immediately after the events in Resident Evil: Retribution, humanity is on its last legs after Alice is betrayed by Wesker in Washington D.C. As the only survivor of what was meant to be humanity's final stand against the undead hordes, Alice must return to where the nightmare began - Raccoon City, where the Umbrella Corporation is gathering its forces for a final strike against the only remaining survivors of the apocalypse. In a race against time Alice will join forces with old friends, and an unlikely ally, in an action packed battle with undead hordes and new mutant monsters. Between regaining her superhuman abilities at Wesker's hand and Umbrella's impending attack, this will be Alice's most difficult adventure as she fights to save humanity, which is on the brink of oblivion.
PostTweetShare Share with WhatsApp Share with Messenger
Community Updates
Amazon DealsAmazon discount code
If you click through or buy, retailers may pay hotukdeals some money, but this never affects which deals get posted. Find more info in our FAQs and About Us page.
New Comment Subscribe Save for later
7 Comments
17th Dec 2019
also in most poundlands.worcester stores have loads
17th Dec 2019
Haven't seen in Poundland in Newcastle?. Got all the other movies
17th Dec 2019
It's usually in the cardboard boxes on top of the shelves. Probably still up there with the other newer blu-rays until the staff have had their pick of them
17th Dec 2019
Rubbish!
17th Dec 2019
It's a good price... So heat where it's due. However it is a dire movie, and I'm a huge fan of the series. So much so, it's the only film in the series I have only seen once.
17th Dec 2019

It was just a money maker good job it is the last one.
22nd Dec 2019
I just thought I'd update that the UV copy on this one works still, you redeem it on the Sony site and then it links you to Google Play to add it to your Play Store account for free.