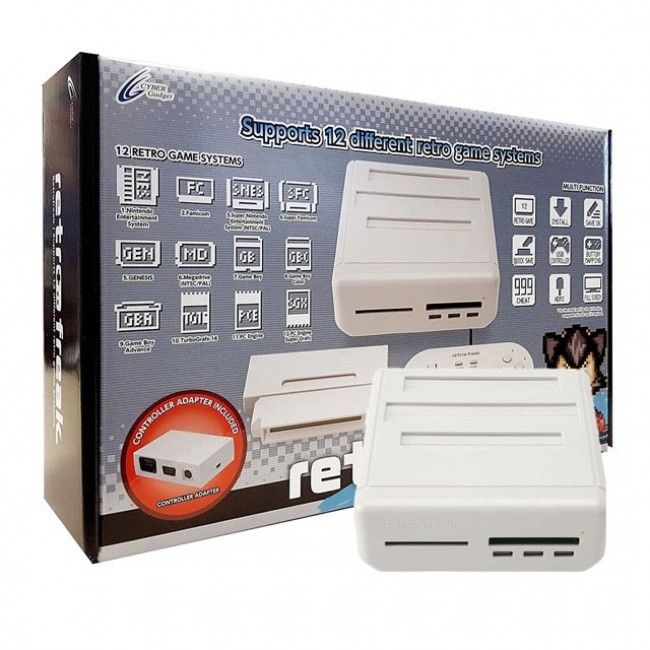 A competitor of the Retron 5, the Retro Freak is an all-in-one clone console, compatible wifh NES, Famicom, SNES, TurboGrafx, Mega Drive/Genesis, Gameboy, GBC, GBA and SuperGrafx carts (and their international variants). The Premium Edition also comes with an adaptor allowing for the original console controllers to be used.

More details and the official spiel below:

The console also allows you to rip and install games on to the console with the use of an SD card! The device comes with an HDMI output and supports HD up-scaling, instant saving and cheat codes which can be found online.

The Retro Freak retro games Console comes in two main parts. The largest of the two is the cartridge adapter, whilst the smallest part hides underneath emulating all your favourite old school games.

Both versions (Standard and Premium) also ship with a NES (Nintendo Entertainment System) controller, but it will also work with modern gamepads such as the DualShock 3 and DualShock 4. The premium version also ships with the controller adapter that supports TurboGrafx, Famicom, Super Famicom, and SEGA Genesis Controllers.

Was this a question?

Assuming you have no original carts, then nothing at all.
4th Sep 2018
Interesting but basically just a cart reader for those with the real games. All games are done via emulation.
4th Sep 2018
Is it any good?
4th Sep 2018
Any better/worse than the Retron 5?

I have a Retron 5 and just found it to be cheaply made and the carts were gripped to an inch of their lives that after a while the cart slots started to not work first time...

Anyone with any personal experience of this and if poss how this would be better then the Retron 5 would be greatly appreciated if you shared, thanks

Heat for the price, although in reality it should really be the standard price for something like this.
4th Sep 2018

Is it any good?

Perfect emulation on all the carts I've so far tried (60 or so).* The only cart it didn't play was a repro of Clock Tower but all commercial releases - - East and West - - have been recognised by the device.
5th Sep 2018
I have owned this for a while now and can honestly say despite it's rather bland looks it's worth every penny (I originally paid £160) it has played everything I have thrown at it without complaint, simple yet effective interface and half descent controllers, the premium also comes with a dongle if you wish to use original controllers.

Now the downside let's not kid ourselves here the only reason you would really need or want this is to play ROMS and due to recent events (thanks Nintendo) they are getting harder to come by hence I suspect the price reduction.

If you can get your hands on ROMS or have access to original carts then retro gaming has never looked so good.

MM
Edited by: "Mire.Mare" 5th Sep 2018
5th Sep 2018
I have one of these and it is an amazing piece of kit. Hands down beats the retron 5 in every category, the controller is decent too.

For 100 quid you will basically be able to play any childhood favourites on your tv with flawless emulation and in HD. This is a bargain.
5th Sep 2018
My favourite game was outrun which console old or new does this game with great graphics thankyou for your help
5th Sep 2018

Was this a question?

I read that there is some input lag, especially on the Megadrive emulation. Can you tell me if you've found that too?
5th Sep 2018
The added bonus with this machine is once you’ve added your carts, you can put the slot loader in the draw and run the small credit card sized (bit thicker though ) console somewhere behind the TV keeping your space uncluttered.
5th Sep 2018

These machines always have input lag and the emulation is ok but never amazing.

I would rather connect a mega drive to an OSSC and play it that way, but it's not for everyone.

For SNES I wouldn't look past the Super NT from Analogue, the FPGA hardware simulation is as close to perfect as you will get with no additional input lag.

Alternatively if you have a fast enough PC, Higan is also excellent.
5th Sep 2018

Agreed on all that. I have a UK modded Megadrive and a Jap Famicom. Both with Everdrives. The OSSC looks great but is quite expensive (although A LOT CHEAPER than a Framemeister!). Retroarch is also now doing the run ahead latency which helps. I can live with a little bit of lag so maybe the Retrofreak could be an option for me.
5th Sep 2018
I have a largish NES & SNES (Mainly NTSC) and a MegaDrive collection and since buying the RF (about 12 months ago) I have never felt the need to set them up, regarding lag I can honestly say that I have never come across a game yet that was running so badly that It felt detrimental enough to the gameplay to switch it off!

Is it perfect well no and for all those looking for emulation perfection across all these formats good luck but for everyone else it's comparatively cheap does everything you ask of it and is easy and fun to use!

Current fave: Super Back to the Future Part 2 (Super Famicom)

Current fave: Super Back to the Future Part 2 (Super Famicom)MM

Little known gem that one.

Been tempted for one of those since they were announced, the shipping prices make my eyes bleed though.
5th Sep 2018
Good price if you are in the market but I will stick to CRT gaming for old consoles
5th Sep 2018
Voted Hot for price.

To be honest though all these multi retro type devices don't play any better than the standalone emulators that you can get for free.

Remember that this is using emulation so NOT all games will work and there will be differences with sound and other oddities.

Any special carts that use extra chips on them wont work like Virtua Racing for the Sega Mega Drive where this will work in a emulator.

Your better of reusing a old laptop or PC with something like retroarch and buying a multi controller usb adaptor.
5th Sep 2018
Code FRUGALGAMING brings it down to £94.99
Edited by: "Malachi_X" 5th Sep 2018
5th Sep 2018

I disagree that the only reason people would want this is to play roms. If anything I'd say it's the opposite. The main reason to get this is because you want an easy and not too expensive way to use actual carts. If all someone wants to do is play roms there are other devices such as the raspberry Pi that can play them just as well at less than half the price.
5th Sep 2018
the undeniable advantage of original hardware vs emulatiom machine (like pi) is the use of original hardware!
this thing takes the real cart and turn it into rom then,then play it via emulator.that's just silly and a waste of money.
5th Sep 2018
I bought one of these a few months ago for £130, and I’m very pleased with it. It’s a great way to keep your library of retro games- just insert the cart, copy it to your memory card, and you can play it any time you want. Sure, it’s not perfect, but it also doesn’t have any glaring issues either. A lot less fiddly than a Pi, and I’ve only seen issues with the emulation on my UK version of Starwing.

i know I’m opening myself up to abuse from the Retropi elite, but I’m not too technically minded when it comes to the basic programming skills needed to get GBA games working- all I had to do with the Retrofreak was to insert the cartridge.
5th Sep 2018

I think they're asking which console Outrun was released on with the better graphics.
5th Sep 2018
O droid is a great little machine for emulation...or even a Pi, but this seems ok...?
5th Sep 2018

They're not that hard to find. I wanted some for my Vita during the weekend and I found ROM packs containing virtually every game ever released for the SNES, Megadrive etc within seconds using Google.
5th Sep 2018

Ah in that case:

MM
5th Sep 2018
Out of stock...
5th Sep 2018
For those talking about roms, the difficulty now is finding European version tons, which for modded wii u’s make GameCube gaming difficult outside of the mainline mario series’
5th Sep 2018
I see the arguments for and against this type of system but I do think they have a place. I am a collector or retro games and consoles so have quite a large selection. The problem is having them all ready to go at once. I am in the very lucky position to have a room at home dedicated to gaming. But even then I am constantly moving around consoles and cables to switch between systems. This prevents all that, small footprint and one cable to the TV replaces many others.
In an ideal world I use the actual hardware but I am going to say that most people given a blind test would not be able to tell the difference.
The fact you can use the original controllers is great, that I would say is more important to me than if the sound emulation is spot on.
5th Sep 2018

Of course my statement would not apply to literally everyone, but you would be more than a little nieve to believe that most people purchase this device just to play original carts I mean have you seen the price of some of those games!

Mmmm I think that the vast majority buy this for

Edited by: "Mire.Mare" 5th Sep 2018
5th Sep 2018
All that's happened regarding ROMs is that the repositories we all came to know and occasionally love have been killed off by bully boy threats from Nintendo, a company that is going out of its way to behave like a petulant arsehole atm.

When the entire back catalogues of the NES and SNES amount to less than 1GB combined, the ROMs that are out there will never disappear. More dangerous will be the preservation of ROMs for CD based consoles since those files are usually much larger. Ironically none of those systems have diddly squat to do with Nintendo but they all got wiped when the likes of LoveROMS and Emuparadise were axed.
5th Sep 2018

Sega ages for the Sega saturn/ps2 will have the best looking classic outrun I'd say. But I could be masterfully wrong there! Surely to keep it authentic it would have to be the megadrive version?
5th Sep 2018
I assume this is just a tarted up Pi? Genuis Idea, but would never dream of spending that money.

If people really want to get the retro feel best way to do it would be:

I have this setup at home, play all my GameCube games, Snes, MegaDrive etc. games without a problem.
5th Sep 2018

Yes, but you can't use a Wii on HDMI. I think a key factor in buying this console (or any other emulator to play on your screen).
5th Sep 2018

Or better still get a Vita. In terms of power and capability it isn't too far away from the Wii but it can also play some great ports of newer games, supports TV Out and can be played when you're on the go as well.
5th Sep 2018

Great collection on the Dreamcast 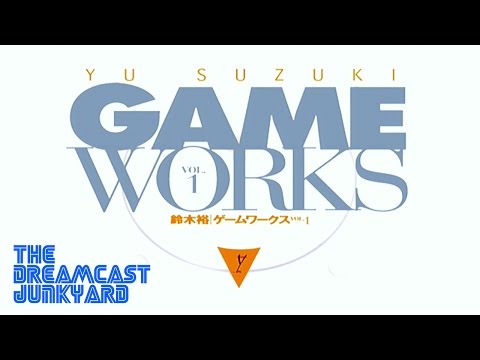