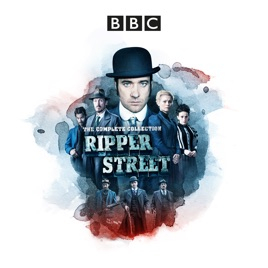 Ripper Street, Series 1 to 5 The Complete Collection £9.99 on iTunes

Series 1 – 5 of the compelling crime drama set in the seething backstreets of Victorian London, plus two ‘Behind the Scenes’ episodes. Haunted by the failure to catch Jack the Ripper, Inspector Edmund Reid now heads up the notorious H Division - the toughest police district in Victorian London's East End. Charged with keeping order in the blood-stained streets of Whitechapel, Reid is ably assisted by formidable sergeant Bennet Drake and ex Pinkerton Captain Homer Jackson. They are tasked with bringing law to the lawless despite being beset by their own personal demons; Reid, the loss of his daughter; Drake, his unrequited love for street girl Rose and Jackson, his tempestuous relationship with Long Susan, his American fiancée who harbours ambitions all of her own.
PostTweetShare Share with WhatsApp Share with Messenger
Community Updates
ITunes Store DealsITunes Store voucher
If you click through or buy, retailers may pay hotukdeals some money, but this never affects which deals get posted. Find more info in our FAQs and About Us page.
New Comment Subscribe Save for later
3 Comments
18th Nov 2019
Included in amazon prime
18th Nov 2019
If this is produced by the bbc it should be also free on bbc iPlayer, check it!
18th Nov 2019

Not how that works.