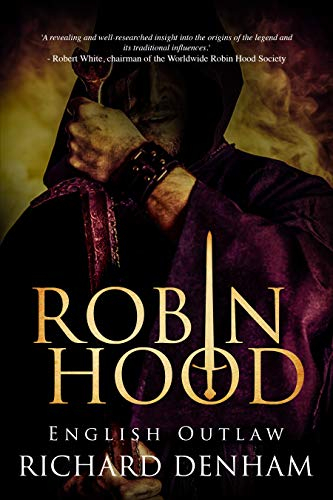 Robin Hood: English Outlaw (the origins of the legend and the search for a historical Robin Hood) Kindle Edition - Free @ Amazon

Paperback is £10.‘A revealing and well-researched insight into the origins of the legend and its traditional influences.’ – Robert White, chairman of the Worldwide Robin Hood Society

We all have an idea of Robin Hood, England’s most famous outlaw: a handsome and hooded woodsman in Lincoln green emerges from the crowd, effortlessly looses his bow at his target and splits another arrow in two to the astonishment of the spectators. We can imagine Robin Hood, but why, and where have our ideas of the man actually come from?

What is most surprising about the legend of Robin Hood and his Merry Men is how much his tales have deviated since they were first conceived. We start almost a thousand years ago with a group of bandits, comical and criminal in equal measure, who despised the Church, kidnapped strangers and waged war on lords and landowners, but astonishingly, and perhaps inexplicably, Robin was destined for greater things. Robin, like his readership, adapted, evolved and changed with the long centuries. We see him turn into a righteous partisan, stealing from the rich and giving to the poor and heroically defending the people from the tyranny of King John until the return of Richard the Lionheart. Stories that we think are ancient are often less than a century old, politically correct additions from the nascent age of cinema. We find him now a Hollywood heart-throb, with perfect teeth, designer stubble and an almost supernatural skill in combat and romance as he conquers enemies and lovers alike. And, as history always reminds us, the stories we know are rarely the stories that are true.

Robin Hood: English Outlaw gives a fascinating account of the famed rogue, unraveling the layers of legend and myth in search of the man who has always been an enigma. The story of Robin is inextricably linked with the story of England; he shares our greatest achievements, our proudest moments and our darkest chapters.

And this is the enduring legacy of Robin Hood, whether man or myth, whether hero or villain, he is part of England’s story. We know Robin, the Merry Men and Sherwood Forest; we just don’t remember why