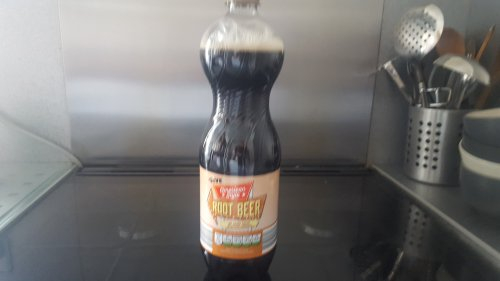 1Ltr of American Style Root Beer for 37p at ALDI.
I love root beer but find it hard to find, sometimes get AW and MUG but they tend to be expensive so I usually get the Carters brand from ASDA.
This root beer I found in ALDI today and after an hour in the fridge I had a quick slurp and found it to be quite nice.
Hope it helps some other root beer lovers!
Worth a try at 37p
PostTweetShare Share with WhatsApp Share with Messenger
Community Updates
Aldi DealsAldi Discount Codes
If you click through or buy, retailers may pay hotukdeals some money, but this never affects which deals get posted. Find more info in our FAQs and About Us page.
New Comment Subscribe Save for later
70 Comments
1st Jul 2017
Cheers. Will try one.
1st Jul 2017
Haven't had root beer in many many years - McDonalds used to sell it on draught (the brown Fanta button) and it used to taste like mouthwash, without the alcohol.
1st Jul 2017
Isn't Dr.Pepper a root beer?
1st Jul 2017
is it sugar free?
1st Jul 2017
Yes sugar free taste a bit like dandelion and burdock. Kinda medicinal like kop kops/ licorice sorta flavour.
1st Jul 2017
^^ i believe it is close to zero, i got some and it tastes just like mouthwash. i like it
1st Jul 2017

is it sugar free?

Just thinking now as I'm drinking it, it reminds me of Bundaberg a bit, really fizzy as well. Not quite as nice as I first thought.
1st Jul 2017
Oooh i love root beer! Anyone wondering what the taste is it's like drinking sweet Germolene. Very tasty!
1st Jul 2017

Never tried Root Beer, is it good - what's the ABV?

Never tried Root Beer, is it good - what's the ABV?

X) X) X) X) X) Modern Britain.
1st Jul 2017
Just got back from my trip to Aldi. It wasn't with the rest of the drinks in Kettering but was over in the corner by the tills.

Initial impressions are that it tastes like Carter's (ASDA) with a tiny bit more flavour but I've put some in the fridge so we'll see if that makes a difference like the OP said.

Lol; sorry, the wrong end of the scale; i.e. old, un-americanised and know beer as a 'British' drink!
Edited by: "Sunrayho" 1st Jul 2017
1st Jul 2017
I bought this last year. Better than carters and cheaper.
1st Jul 2017
Tastes like TCP
1st Jul 2017
Excellent find. Looking forward to the Grape Soda they have too!
Thank you!
‌
2nd Jul 2017
not for me thanks
2nd Jul 2017
I have a case of "Dads" root beer on order, but if I am in Aldi I might try this, though sugar free worries me. If you live near a Chinese/Oriental super market then there is a good chance of them having the Chinese/Filipino root beer type drink called "Sarsi". I love root beer, I much prefer it to Dandelion and Burdock (Thats pretty much always sugar free these days which doesnt help ) .

About 12 years ago there was an experimental "A&W" burger/hot dog restaurant combined with a KFC at the Cineworld complex in Ashton Under Lyne, Tameside, Greater Manchester. They had unlimited refill A&W root beer, but unfortunately stubborn and unadventurous Brits were not interested in the A&W part of the restaurant or the root beer and now it is just another mediocre KFC.
2nd Jul 2017
Anyone know if this brand has caffeine in it?
I love root beer but a few brands have caffeine in which I am allergic to.
2nd Jul 2017

not for me thanks

There were a few attempts to get American brands over here in the late 90's / early 2000's if I recall. Kraft were pushing quite a few products, but there was just no demand for it and I think now it's a case of once burned...

Unfortunately now any brands that are attempting a push are so heavily modified in recipe it is not recognisable and are genuinely rank. Kraft Mac & Cheese, Cheetos are a couple of examples.

As far as I can tell, Dunkin Donuts has closed a few stores although Taco Bell has opened up a few more, but again the menu much smaller than the US version.

It's a shame really, I'd like to have seen A&W in the UK as I really like root beer, but it's just not the time for it. The UK has gone through the faux pulled pork phase, currently in the Burger phase (which many of the new restaurants still can't get right).

I thought DD were expanding in the UK? Out of interest which ones have closed down? I've only been to the Leeds branch but was told there should be one opening in Manchester. (Any idea if they are all Halal like the ones in Leeds or do they operate a mix bag like KFC)?
2nd Jul 2017

Was reminiscing about this place recently & wondering what it is about Ashton attracting such places (like the Five Guys they now have right next to where the KFC (and old A&W) is.
2nd Jul 2017
I don't get why these self-serve Coke product machines (as seen in BKs / five guys) don't have room for some root beer offering. They've got all sorts of other weird flavour mixes for Coke / Fanta
2nd Jul 2017

Yeah, it's a shame Dunkin branches are so few and far between, their doughnuts are great. Their boss has just bought Leyton Orient football club, so maybe a few branches will appear around East London...
2nd Jul 2017

A few years ago DD had a few branches West - Portishead services was one of them, and I remember a few dotted around towns along the M4. No idea about Halal, and I can't see any information on the website about it.
2nd Jul 2017

I don't think Coca Cola brand do Root Beer, although I wouldn't complain if they brought over Mello Yello
2nd Jul 2017
Tastes ok, not quite as good as the American branded ones but much better than carter's.
2nd Jul 2017
Where abouts in Aldi do you find this, is it on the specials or with the rest of the soft drinks?

Edited by: "margamboy" 2nd Jul 2017
2nd Jul 2017
I remember as a wee boy getting Sarsaparilla (same as Root Beer?).
Sarsaparilla: best as a sweet soft drink, but did you know Sarsaparilla is thought to have many medicinal properties.
I tried it not so long ago...not the Aldi one...and it is as some people describe....unusual, not quite as good as I remember it to be...and very much best served very cold !
I'll give the Aldi one a try :D...also the Grape Soda mentioned above