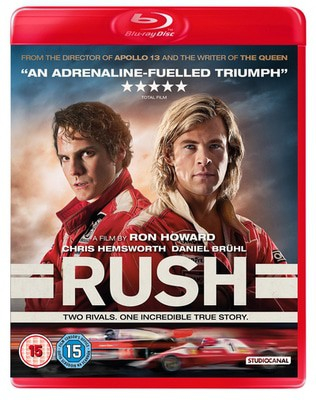 Decent price for an excellent movie. 10% automatically applied at checkout.

Academy Award-winner Ron Howard (A Beautiful Mind) once again teams up with Academy Award-nominated writer Peter Morgan (Frost/Nixon) on Rush, a fast-paced and spectacular re-creation of the merciless and legendary 1970s Formula 1 rivalry between English playboy James Hunt (Chris Hemsworth; Thor) and his Austrian opponent, Niki Lauda (Daniel Brühl; Inglourious Basterds).
Set against the sexy and glamorous golden age of racing, Rush portrays the exhilarating true story of the charismatic Hunt and the methodically brilliant Lauda, two of the greatest rivals the world of sport has ever witnessed. Taking us into their personal lives and clashes on and off the Grand Prix racetrack, Rush follows the two drivers as they push themselves to the breaking point of physical and psychological endurance, where there is no shortcut to victory and no margin for error.
PostTweetShare Share with WhatsApp Share with Messenger
Community Updates
Music Magpie DealsMusic Magpie Discount Codes
New Comment Subscribe Save for later
5 Comments
20th Mar
Excellent movie
Quite sad in retrospect
Heat @merb0786‌
20th Mar

Loved it! Quite sad in many ways, but yes, excellent.

Worth reading James Hunt's biography too.
21st Mar
Thanks great movie
21st Mar
For a minute there I thought this was a deal for a HD DVD movie.