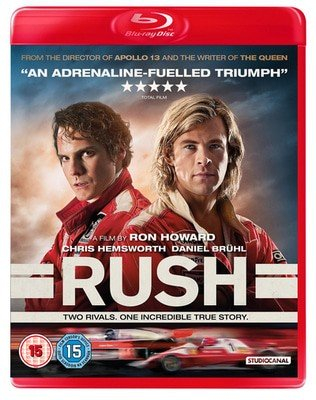 
Academy Award-winner Ron Howard (A Beautiful Mind) once again teams up with Academy Award-nominated writer Peter Morgan (Frost/Nixon) on Rush, a fast-paced and spectacular re-creation of the merciless and legendary 1970s Formula 1 rivalry between English playboy James Hunt (Chris Hemsworth; Thor) and his Austrian opponent, Niki Lauda (Daniel Brühl; Inglourious Basterds).
Set against the sexy and glamorous golden age of racing, Rush portrays the exhilarating true story of the charismatic Hunt and the methodically brilliant Lauda, two of the greatest rivals the world of sport has ever witnessed. Taking us into their personal lives and clashes on and off the Grand Prix racetrack, Rush follows the two drivers as they push themselves to the breaking point of physical and psychological endurance, where there is no shortcut to victory and no margin for error.
PostTweetShare Share with WhatsApp Share with Messenger
Community Updates
Music Magpie DealsMusic Magpie Discount Codes
New Comment Subscribe Save for later
18 Comments
14th Feb
Got this from Poundland for £2 , may still have some if it's easier. Sweet have some heat
Edited by: "Disco.Dave" 14th Feb
14th Feb
Nice have some heat
14th Feb
hot, great movie
14th Feb
Great movie and well worth the price.
14th Feb
Good Movie
14th Feb
Great film
14th Feb
This is an amazing film - I am currently hunting for the 2 disc, with the limited slipcover
14th Feb
Great movie, I'd expect this to go fast! 😁
14th Feb
Great movie, Lauda was still alive when I watched this, will be even more poignant now.
14th Feb
This was a fantastic film, I was unaware of the rivalry as it was before my time. For me Hunt 'Stole' the title from what little id seen and read. But the film really does broaden the picture and show what epic and polar opposite characters these guys were.
Something that we seem to miss today.
I also think its nice there will always be this fantastic film to remind none-F1 fan viewers what great champions they were.

Great performances from the actors to. Hemsworth is talentless and ugly (no idea what the girls see in him) but he did an ok job i suppose........
15th Feb

I have that it's a nice set. Sainsburys exclusive though so difficult to find no doubt.

Without Lauda's accident he would have been champ', but there was a lot of politics at play during the season, like McLaren being disqualified from the Spainish GP and Brands Hatch, although they got the points back with the former iirc. There's a really good BBC documentary on Hunt/Lauda and that season: vimeo.com/130…199 it's from a few years back but was on again recently I think after Niki died.

Yeah, the ending brought a tear to my eye even before he had passed away.
15th Feb
Great film, saw it at the cinema on release , some of the cinematography is amazing especially on the grid. OK it has some Hollywood thrown into it but it's no bad thing. Must dig out my disc and watch it again.

There is a Barry Sheene movie in progress at the moment which has the potential to be as good as this.

I thought some of the racing sequences were shot too up-close but that's probably just me being picky. I don't recall being amazed by it at the cinema, but having seen it since I appreciated it more, and I know people who aren't into racing that enjoyed it.

Yep that's the scene Agreed re Road too. Cheers for the unrideables links aswell