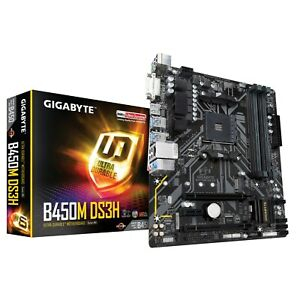 The 3600 which gets recomended alot on the 3rd gen which could be somewhat be cheaper at 177 this past week but time u add the cheaper B450 at £54 = 231 so for £12 extra a real bargain, these boards are nice, if your going to O/C get a better board but that means extra cash and this is aimed for folks who are going to keep things at stock so for them the 3600x at 12 pound more beats the 3600.. and its comes complete too. with that 3year ccl warrenty.

The 3600x comes with a choice of Borderlands 3 or The Outer Worlds and 3 months xbox pass.
PostTweetShare Share with WhatsApp Share with Messenger
Community Updates
EBay DealsEBay discount code
If you click through or buy, retailers may pay hotukdeals some money, but this never affects which deals get posted. Find more info in our FAQs and About Us page.
New Comment Subscribe Save for later
18 Comments
23rd Nov 2019
How much faster is a Ryzen than an FM2+ really?
£243 for a motherboard jeez I must be getting old my old fm2+ only cost £54 and my board has more slots and ports than this £250 jobbie!
‌
I am out of the cpu upgrade game now so is it really worth an upgrade.
I am still on an A10 and only play WOT so good enough for me!
‌
Edited by: "omendata" 23rd Nov 2019
23rd Nov 2019

It's the high end cpu that makes the bundle expensive. You can get on the AM4 ladder alot cheaper.

My bad i thought it was just the board but still a bit expensive I remember when AMD cpus were cheaper than Intel lol
I still have a desktop running a 486DX2 and Win3.1
Ever put Windows 95 on a FM2+ its faster than the Cray XMP Supercomputer lol
Only problem is WOT doesn't run on it harrumph!
‌
Edited by: "omendata" 23rd Nov 2019
23rd Nov 2019
ive just posted this deal again as there is another listing wihich has 16gb ram which works out £49 on top of this deal, which is the adata 2x8gb, ive bench marked this Ram and its perfect,
23rd Nov 2019

Yeah 16gb is the sweetspot I even have that in my old FM2+ and its ancient but it does help with those nasty Chrome memory freezes and nasty Windows 10 memory leaks!

^ not as good saving compared to doing it yourself like this 3600x model, but still saves u pasting it and u get 3 years warrenty.

How good is this board?
is the 2600x a big drop down in quality, or wll it not matter if I get a decent GPU?

I have read that if i get a tomohawk max, then in two years I would be able to upgrade my cpu on to the same board, is this also true with this board?
sorry for all the questions lol
23rd Nov 2019
The ryzen 5 3600x is £206 at Aria just now, according to pcpartpicker.com
23rd Nov 2019

The Tomohawk is one of the best B450 boards, its nice to O/C it, but as stated before there is nothing wrong with the board in the post, so it depends what ur intentions are, the tomo does get heat by custom builders, where the giga gets knocked oh dont go for that and tbh majority aint even tested it, i have and im happy to use it for budget builds or high stock ones, i wouldnt use a 3700x in it though due to the heat, going back to what u said, ur the perfect example of my many times statement ive said GPU over CPU, knock down to the 2600 or x -and use the funds for the higher GPU, that statement would apply again on the MB...... so this deal i post would be great for people looking at upgrading and have a GPU or going higher then the 1660TI, for anyone thinking of a better board... or better cpu and cutting a gpu, wrong..... nothing wrong with that gpu, just done that on a 2600x but there budget was limited to the rx590/2600x not anything futher. (got the 90 same price as 80)
24th Nov 2019

The AMD chips still are cheaper. Compare similar core/thread counts, factor in AMD's performance is about 95%+ of the same Intel then look at prices. Won't always come out one way or the other but genuinely about the fairest comparison.
24th Nov 2019

Speed is really subjective now - it was more noticeable years ago with core2 duo and start of the i3 i5 i7 but now who really needs super desktop computers?

I used to be a hardcore overclocker and optimiser but in reality even if you do trim down all the startup services overclock these days the advantages compared to the time you spend testing, benching isnt worth it anymore! Even changing the memory for a few extra cycles isnt worth it really for me!

Speed is for the gamers really and I only play WOT and Unreal Tournament 2003 these days so my i5 laptop and fm2+ pc is good enough - not enough incentive for me to upgrade although the support for flashy led light strips on this motherboard has caught my eye lol
‌
Edited by: "omendata" 24th Nov 2019
24th Nov 2019

Absolutely. Mines... well... a silly rig for what I use it for (Largely WoW Classic atm at least this time with the "warmed over" graphics improvements and at 4k). AMD works as "usually much cheaper for damn nearly as good" still.

The folks advising the 2600 and a B450 board probably have the right idea for folks not tooooooo bothered about "best" kit. That and a 1080ti would run... well... everything VERY well, possibly even into 1440p territory.

Xbox one x is 4k is it not?
I have my eye and wishlist on an xbox one s
Purely because I saw Star Wars Battlefront II and Forza 4 on the gadget show and ive always wanted a Star Wars 1980'S sitin cabinet lol
Actually downloaded SWBF II but havent played it on the pc yet there is just something about playing it on a console that seems appropriate!
My mate has a Star Wars Sitin in his man cave cost him about 4 grand along with a home cinema, pool table, galaxians arcade unit and he has just bought a hot dog machine and candy floss maker to go with the minibar full of cider and popcorn machine.
His mancave is a true home cinema who needs the Odeon lol
And his pc well he runs a Dell Poweredge server rack like me and has almost as many servers as i do!
There is tech geek and then there is tech geek so dont consider your setup overkill
This is actually one of the racks in my lounge lol
And yes that is an IBM M1 Server all 200lbs of that black beauty.
Case would make a great desktop eh!
Cant see me taking it to a gaming meet however lol 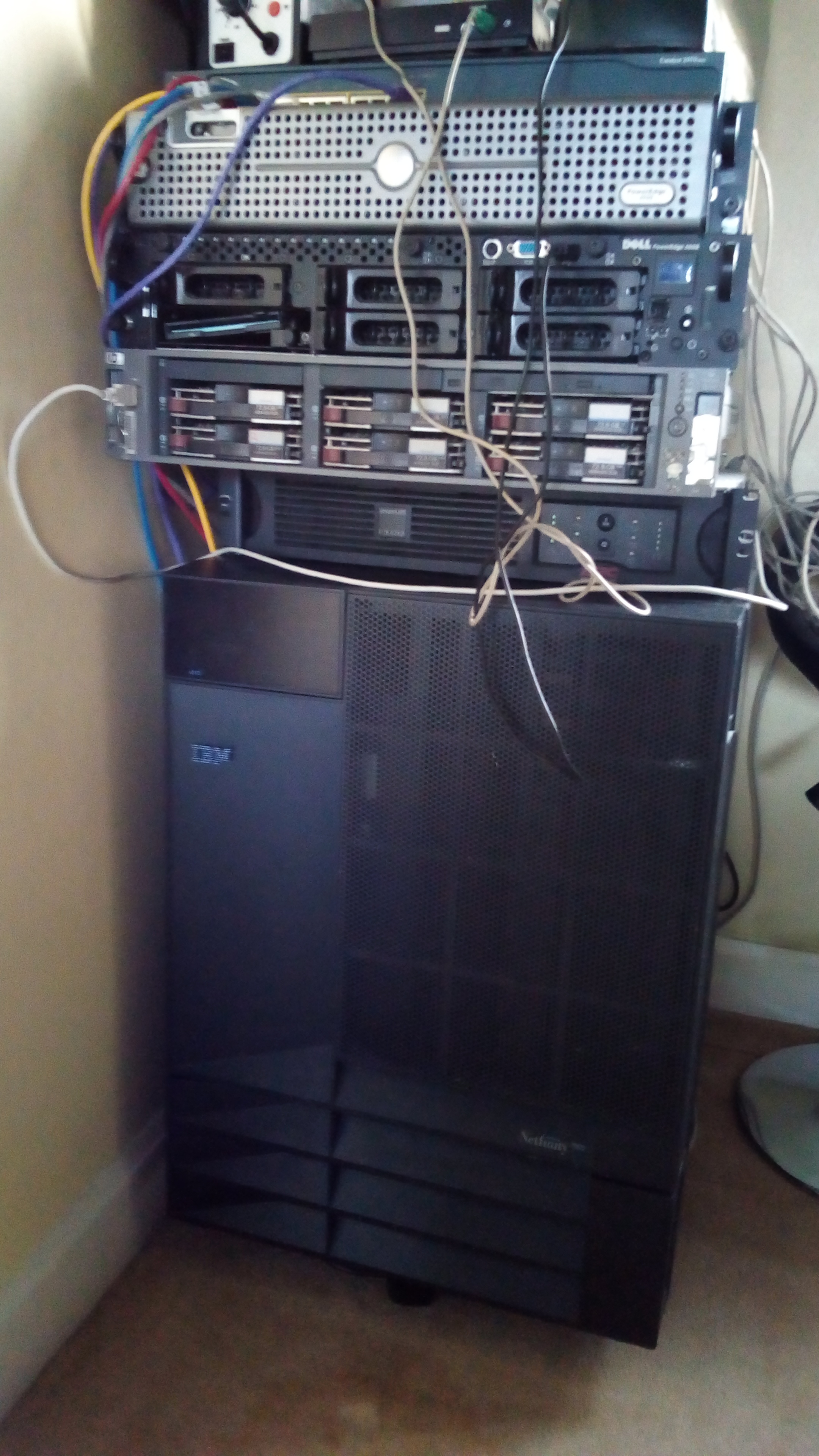 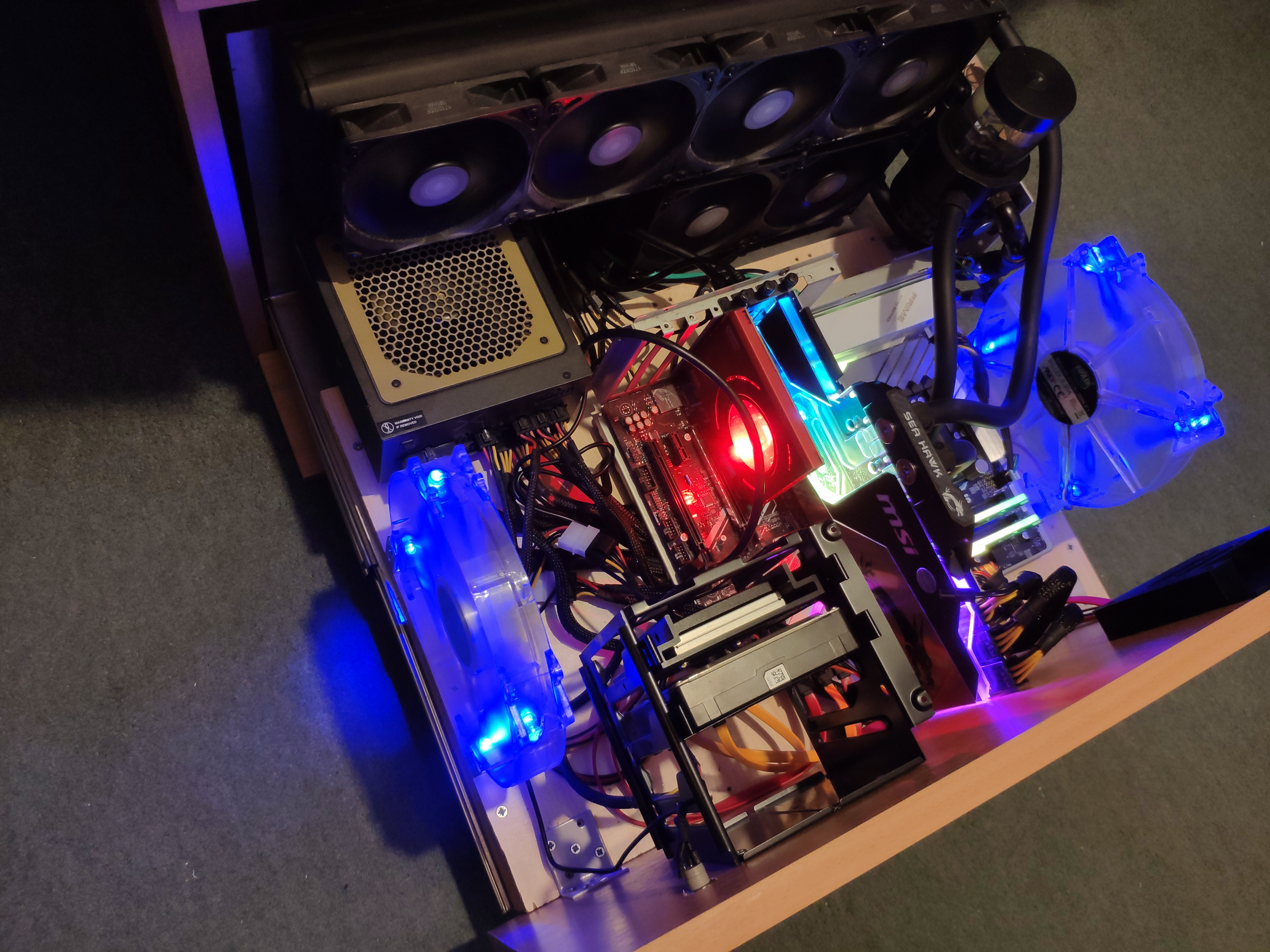 Rolls away into the cabinet with holes+covers for the intakes.

My point was more... if current tech SEEMS expensive, there's plenty of "good enough" options
24th Nov 2019
Reading this and other threads about better GPU to fo with the new Ryzen, I don't think I need that so do I really need a B450 and Ryzen 5 3600?

Currently on an Intel i5-2500k with Win7 installed in July 2011. My gaming used to be FS2004 and Transport Tycoon! More playing with VM servers these days. My wife uses Photoshop/Illustrator/3DMax and occasionally plays SIMS4.