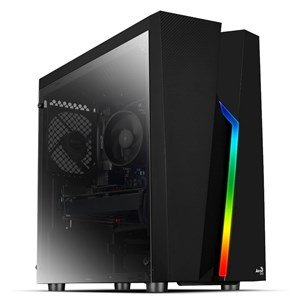 Rough break down: had to play with fans as RGB ones not on there which are £16..
uk.pcpartpicker.com/lis…6L2

good budget system the 1600 as its the AF model, with a good bang for buck GPU, or someone who wants the 3rd generation, then laters on they can increase the GPU for the build,
PostTweetShare Share with WhatsApp Share with Messenger
Community Updates
CCLOnline Deals
New Comment Subscribe Save for later
32 Comments
15th Apr
+£12 extra for the MSI mort, the Board for the Oclockers.

if u want an After market cool: find one on their website,
stick it in the same basket, pay as one go........

if u want a nice nvme: find one on site, and just remove this SSD option.

PS: they do have some in the drop downs anyways, the Cryorig H7 Single Tower Heatsink with 120mm Fan is nice...
Edited by: "sarden84" 15th Apr
15th Apr
im looking to get a new pc and have a bout £1000 what would be the best pc i could get for the dosh? im looking for a prebuild as im not very confident on the building front. thanks
15th Apr
How do you know it's the AF model? Their listing for the 1600 has the AE part code.
15th Apr

Bought many, others users on here have too, email confirmed the ones they got in are AF, and it says on there Q/a on the site?..
15th Apr

Best Gaming for 1000?, any productive work at all?

1) Do u want a fantastic click buy? or 2) dont mind giving the firm a call n doing some swap overs. n following my advice

Mainly gaming, willl need to do a little bit of work but nothign too strenuous on that front. I have a rig thats like 5 years old and is now struggling a bit with most modernt games. I would like to just click and buy. I dont mind giving firms a quick call, do loive a haggle.
15th Apr
First of all, thanks for all your effort with these deals.
Only few other alternative cases available in customisation, I need a white one. Can it be done?
15th Apr

Not at present, CCL aint taking any customization, unless u go the cheeky way i mention above. "add on"......
- but things could change in 2 weeks time... there current management policy, sadly...

I thought about it, but I don't think I can order one without a case.

No you cant any more lol, not since they patched the glitz in the prebuilts where u could remove out pretty much every drop link lol.. that was a good glitch, but they have some other builds where u can go into a special customiser with more parts, sometimes it can be a bonus, more times then not it isnt..

see if i can find out for u,

Kolink stronghold is a first class case for the money

Got £50 more that I can spend on your listed offer. What would you recommend I upgrade with that if anything? CPU, SSD ? Thanks in advance.
Edited by: "MK4" 15th Apr
15th Apr

Yes that’s correct - probably maybe able to stretch to £650 but that would be about it as my son needs a budget keyboard and mouse to go with it.
15th Apr
Great spec for the price however you look at it.
15th Apr

AHH lol.... that bloody budget again.... its the worst figure anyone can give me lol..

just helping someone did 2 idea self builds for a guy half hour ago, and hes taken on board both aspects of mine pro/cons....
very easy choices for self build.......

for u atm its difficult... cos CCL prices on the supers in prebuilts are just so expensive then value... atm...

ill be back with u soon... meanwhile im going to listen to that song..... "half way there"

are u a dad what doesnt mind getting into the case n doing some little twigglng? if so ive got one right up ur street.
Edited by: "sarden84" 15th Apr
15th Apr
Really interested In this. Any tips on how to get cheap windows 10c
15th Apr

I am a dad that hasn’t ever owned a gaming pc! I know a little but the more I read and look at combinations the more confusing it becomes. Also the drop downs on CCL look like for £10-20 extra you get an upgrade and before you know it you’ve doubled the pc cost!
16th Apr

As u said above, u got abit more budget, and as i told another guy via inbox afew options, 3600/rx580 which u could do, or u can go 1600af /2600 1660 super which u should be able to but sadly u cant here, i spoke to mike below about this over fb and he agrees, and its not possible under this build or with any CCL lines atm, there true part to value on the 1660 super atm in this market is very expensive, u could spend the extra on better storage, unless needed extra hdd space, which u wouldnt be asking me ud tweek that ur self as anyone does on these post of mine,


have a look on this one:
awd-it.co.uk/awd…tml

u are taking a step back in motherboard quality, ur not overclocking, ur stocking itll do perfect more money on the gpu, it is a lower super aspect but far dam good dif over a rx580, nothing wrong with a rx580 either but better fps at 1080 gaming n help with more advanced titles.

this is a part build one, its got a ds3h which ive done countless of build in, click on item 3 in it, the 2600....
u can add a hdd there, its only fiver then normal sites, but cheapest atm is : ebay.co.uk/itm…ed6

// and as it was broken down on deal link 3, its on price to part build then u could build urself, so no messing about with too many wires or worry here, which is straight forward but hey u got the extra warrenty for peace of mind n the major of it is done, all u need is to slot a extra ram in, and gpu and maybe hdd depending which option u wanna go n save a tenner there.

so thats my two pennys for a nice £650 system, spec as u said its for ur son, and u got some more budget, its a shame i cant say spend £60 here more n get the super with CCL atm. last month we could today we cant. but if u could go a £60 even more then ccl is back in contention. with its 5600xt aspects using the 1600af

@Jordan_Taylor just inbox me about the 500,

Watch Mike's video review of the game max version jordan before jumping into the higher price one,

This! I'm in the same position.
Those drop down boxes are dangerous!!

The deals and advice from @sarden84 on here have really helped me. I have just clicked the buy button on a CCL Mini Stryker 3600/RX580 setup with extra storage. Boom!
16th Apr

Hugely helpful and I like I’m sure many others really appreciate the time and effort you put into your posts. Really grateful (if not still a little undecided).Thanks again!
16th Apr

Yeah course don't rush into it.

This ccl one now expired gone up somewhat. So if they move off my guide reconsider n ask.

On ccl good deals if they are at the price stated I put, and take note of what not to buy in them on to value such as the 1660 supers,

But the 2 I mentioned are the best aspect for a good super.

And that would be the best choice for a lad, higher up gpu, a decent cpu good enough ram to do the job u dont need to go excessive on all these aspect and good board, each to their own but it's the gpu which where it matters,

I do as per this post upper boards cos there is a market and a good market for them. But it's not the end moral either.
16th Apr

Bought this one today finally. Thanks for all your help.