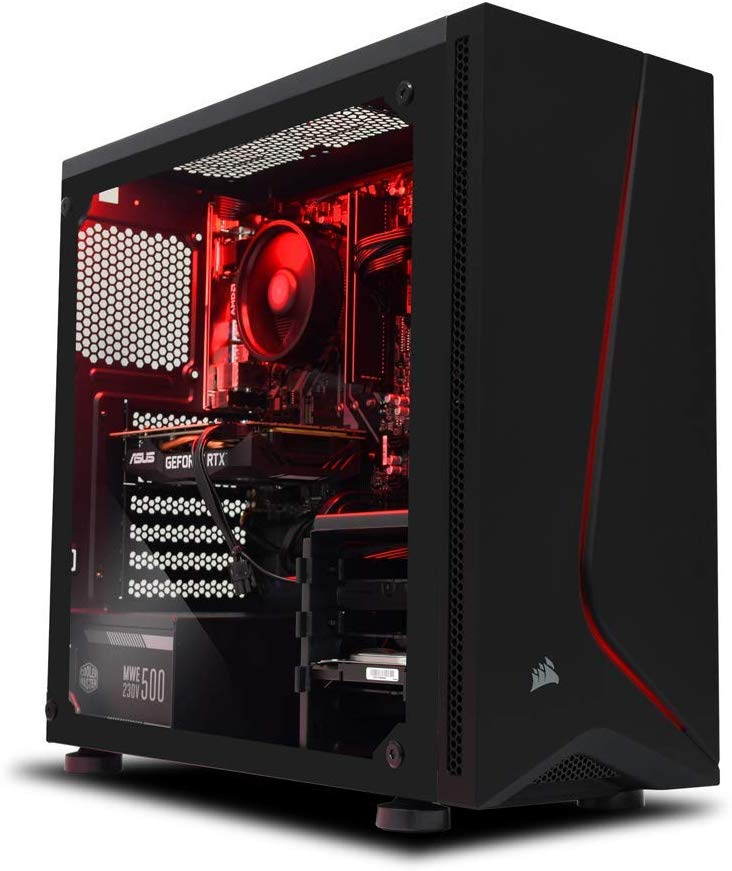 Its not a bad system, its idea for someone using the 2700x who is doing somewhat more productive work, and i say somewhat, as this isnt a board id would do myself for a heavy 2700x user, the aspect of changing for a tenner to a 3600 isnt bad either, and with the windows 10 thrown into the mix where other firms charge £99 is nice to see, we all know we can get windows cheap, but there is alot of folks who dislike that aspect, so for them we got about £750 items for a cost of £669 + £99 windows cost,

the overall conclusion, somewhat cheap parts shoved together a single fan 2060 by asus but the bonus its far from the typical shoved together method u see elsewhere and then on top being a complete utter rip off, would suit a light-med worker who occasional games and wants good gaming results,

Therefore, i put this in to that basket again, of a very odd strange deal but def worth sharing spec in the current state and spec with the state of the ryzen 7 2700x cpu are a complete mess at ccl in prebuilt areas, it might just be right up someones street

Overclock: 2700x on this board, NOT ADVISABLE.

Call up:
Change this motherboard: awd-it.co.uk/asu…tml

Cost: £7 extra. for a much better mid range board.

however if u got another £100 and do windows yourself then the last nights deal is far more better, so depending on the windows aspect and whos buying..
PostTweetShare Share with WhatsApp Share with Messenger
Community Updates
AWD-IT Deals
New Comment Subscribe Save for later
20 Comments
14th Apr
I wouldn't buy anything on a Zen+ architecture now and the X version doesn't add much
14th Apr
The ram is a bit on the high price side, but everything else is pretty good. Heat added.
14th Apr

just the price of ram in this market though out, sadly
14th Apr

just the price of ram in this market though out, sadly

I got 16gb 3300 I think it was, for £50.
Granted it wasn't anything special, and it was before Covid, and I knows prices fluctuate on memory a lot, so you're probably right.
14th Apr

^maybe one aspect using the notes on the bottom on the "phone call swap over".... depending on AWD pricing figures, but will leave that down to buyers to explore into.
15th Apr

Why not? New chips out soon?
15th Apr

Why not? New chips out soon?

but where some will drop to be the next gen budget, others will fall and vanish into obsolete and idiotic prices oh which i see the 2700x being just that. history repeats it so so many times.. cough 1700x
15th Apr

Yeah that's true. I actually misread it thinking it was the 3700x
15th Apr

Why not? New chips out soon?

option to call to change that aspect, this is a nice 2070 super, just needs one major thing changing on the phone, but overall a part to value deal very easily manageable to make very nice.

Fantastic to build in general, "some will come along and say get an msi board", but the Aorus Pro is such a lovely board, good vrm, the msi just tops it but are u gonna do a heavy oc?.. i like the look of the pro

32gb? whats the reason what mhz what brand?

and whats this about AMD Ryzen Prism RGB on a 3600? personal choice?
i dont understand this one sorry... RGB is on the 7s.. are u adding this urself at what cost? seen a nice deal? cos if norm price then id go another route tbh
Edited by: "sarden84" 15th Apr
15th Apr

the full specs are on the link on the website but is:
AMD Ryzen 5 3600 6 Core 4.2ghz
ASUS NVIDIA RTX 2060 Phoenix 6GB Graphics Card
Corsair Vengeance Black LPX 32GB RAM 3200 MHz
AMD Ryzen Prism RGB (Chosen this because it is the default one on the website, but if this is only for the Ryzen 7s, do you recommend i get a different CPU cooling on the website?)
ADATA 480gb 2.5 SSD
Seagate 2TB 7200RPM Hard Drive
Motherboard

All the PC parts are on the link to the website apart from the motherboard.
Not planning to overclock
I'm looking to get this PC for streaming and gaming
Do you recommenced me getting a different motherboard if i'm using this PC for Gaming and Streaming?
15th Apr

its been a long day, now im in the room., it just threw me off.

see what happens, sometimes new "self builders" jump on prebuilt post of mine and is this good, ive just helped someone else with that aspect so i took it as that, ive been talking to alot of self builders lol.

so now ive got ya,

the 7s come with the RGB cooler, the stock cooler of the 3600 isnt, but it does say in the post rgb prism, so it may but im not sure it would, they would just use the one in the box to be fair, so id call them to check.

yes thats very good idea, the adata is perfect 480GB SSD, but u do have the nvme at the same cost half of it, which is great for the O/s......

they messed up on the site, the last 3200mhz ram..... is actuly 3600mhz typo as u see the syn of that, and for the cost difference is marginal. so that would be a worthy, thing but if ur calling double check...

if you're looking of doing things outside of streaming, like video editing, rendering, etc. that uses all those threads, then I'd go with the 2700X

Do u fancy doing windows urself? as i can show u build more elite to ur needs? and what is ur total budget
Edited by: "sarden84" 15th Apr
16th Apr

My Budget is around £1000 but i don't mind going slightly over
I am looking for prebuilt as building a PC isn't something I can do and don't really fancy doing windows myself.
i had chosen the second to-last ram so it will be the 32GB 3200mhz ram and i don't have the name of the SSD as it dosen't show it on the website.
For the motherboard do you recommend the B450 Aorus Pro or the MSI B450 TOMAHAWK MAX?
And the processor you said if i was doing video editing,rendering ,streaming and gaming that i should choose the 2700x. Does it matter which GHz one I go for?
16th Apr

ur aiming for the ultra boards n more budget, id move along from this post tbh
16th Apr

as i said its got the tomahawk..

so u can downgrade to the Gigabyte OC n save few bob, 2060 are limited stock

n do windows ur self.