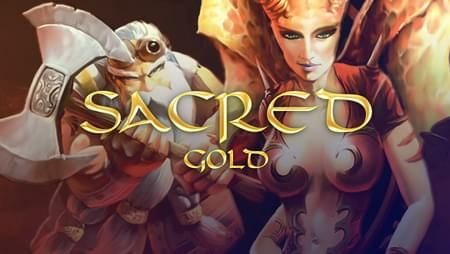 Description
A shadow of evil has fallen on the kingdom of Ancaria. Now is the time for champions. Orcish hordes and Undead legions, Demonic beasts and mythical Dragons. This is the world of Sacred. A time of legends. Your world. Your time. A new adventure begins...

Choose from 8 heroic characters: Dwarf, Daemon, Gladiator, Seraphim, Battlemage, Wood Elf, Dark Elf, Vampiress. Discover the vast Kingdom of Ancaria, but be on your guard. Equip yourself with magic spells, close-combat and ranged weapons, fighting on foot and on horseback.

Collect hundreds of items, forge unique and powerful weapons and armor. Learn Combat Arts, develop new skills and perform devastating combo attacks, made from your own special skills and spells. Battle your way through the massive main storyline and solve hundreds of side and dynamic quests as you cleanse the lands of Ancaria.

Multiplayer notice: Sacred's multiplayer servers (Internet) are no longer functioning, therefore multiplayer is only possible over a local area network (physical or emulated).
Includes Sacred Plus and Sacred Underworld
Many different and very interesting classes and characters to choose from
An engaging storyline viewed from many different perspectives
Goodies
Manual (21 Pages) HD Wallpapers Quickstart Original Soundtrack Underworld Soundtrack Avatars Map Of Ancaria
PostTweetShare Share with WhatsApp Share with Messenger
Community Updates
GOG.com Deals
If you click through or buy, retailers may pay hotukdeals some money, but this never affects which deals get posted. Find more info in our FAQs and About Us page.
New Comment Subscribe Save for later
1 Comment
20th Dec 2019
Slightly cheaper on Steam at £1.39

We don't speak of the third game.