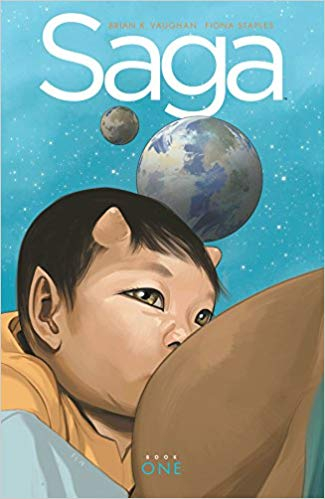 This might be a bit niche for HUKD but I've ordered this & received it but not had a chance to read it yet but Saga is often included in those lists of the best graphic novels that you need to read. There are currently 3 volumes of the Saga deluxe editions, with each reprinting 3 of the tpb volumes. The books usually retail around £25+ each so this is a good price, and I think it's the lowest price it's been on Amazon ever. I believe that the comic book series is currently on hiatus after reaching the halfway point.

At long last, a deluxe hardcover of the Hugo Award-winning Saga is finally on its way! Collecting the first 18 issues of the smash-hit series, this massive edition features a striking new cover, as well as special extras, including never-before-seen sketches, script pages, and a roundtable discussion with the creators about how Saga is really made. Altogether, this hardcover contains over 500 pages for less than fifty bucks! Written by Eisner Award-winning "Best Writer" Brian K. Vaughan (Y: The Last Man, The Private Eye) and drawn by Harvey Award-winning "Best Artist" Fiona Staples (Mystery Society, North 40) Saga is the story of Hazel, a child born to star-crossed parents from opposite sides of a never-ending galactic war. Now, Hazel's fugitive family must risk everything to find a peaceful future in a harsh universe that values destruction over creation. Collects the first three trade paperbacks of Saga (issues #1-24).
PostTweetShare Share with WhatsApp Share with Messenger
Community Updates
Amazon DealsAmazon discount code
New Comment Subscribe Save for later
17 Comments
21st Mar
Confusing description. Says collecting the first 18 issues then at the bottom it states issues 1 to 24?

Great series and a lot of book for your money.
21st Mar

Actually that is pretty confusing. I think it's issues 1-18 in the first book as there's (I think) 54 issues collected across the 3 deluxe editions, so 18 issues in each of the 3 books.
21st Mar
I have ordered a few graphic novels from Amazon and they have all arrived tarnished. They don’t use enough protection and so I no longer buy from them now. Look at forbidden planet instead
21st Mar
Alternatively you could get a compendium of all 54 issues to date for £40.49 (or £31.95 on Kindle):

I thought about buying that but it's softcover & slightly unwieldy at around 1,500 pages in a single book. Also I'm not sure it includes any of the bonus stuff you get included in the deluxe books. Still, if you just want the story & aren't fussed about the extras then it probably makes sense to go for the omnibus.
21st Mar
Highly recommend Saga. Heat from me!
21st Mar

My copy of the book wasn't damaged - it seemed to be fairly standard packaging for books from Amazon, although I don't often order graphic novels from Amazon as it's usually cheaper to buy stuff elsewhere.
Edited by: "bernardsfingers" 21st Mar
22nd Mar
That is mega cheap
22nd Mar
You're in for such a treat. Some of the best storytelling ever, regardless of format!
22nd Mar
This is such a brilliantly executed storyline. I would recommend everyone who can handle some mature situations should read this .
22nd Mar
Image looks like something from Garth Marenghi's Dark Place?!
22nd Mar
Magnificent series.

The enormous Companions are unwieldy and don’t open enough for my liking (although from memory Saga isn’t big on double-page spreads). Plus the Deluxes have lots of interesting extras that aren’t just page-count filler.

I personally already buy the series digitally (between Humblebundle, the old Image Store and Comixology I doubt my per issue average even hits 50p!) but if I were starting over I’d go for this one.

I haven't seen the Saga Compendium myself so not sure exactly the format but the pages in the deluxe edition are larger than the standard graphic novels but I'm not sure if the compendium is a similar in this respect (although I assume not).

While we're on the subject, if anyone is interested in buying the Saga Compendium you can get it from the SpeedyHen eBay shop for £31.24 delivered:
ebay.co.uk/itm…602
Edited by: "bernardsfingers" 22nd Mar
22nd Mar

I don’t have one in front me, but as I recall the compendium is roughly standard trade dimensions but thicker than a rhino hide.

The Image deluxe format is on a par with the Marvel oversized hardcovers, although generally with fewer issues collected. More like A4 in width and length than like a standard graphic novel.
22nd Mar
One of my mates owns a comic book shop so I’m always keen to point out that if you can spare the extra £ often required for a bricks and mortar purchase it would be great if you bought from an actual store.

Even with self isolation many comic shops I’ve seen are expanding their posting provisions or doing curb/door side pickup.

Just a thought at this time when small businesses are going to be going under left and right.
2nd Apr
Also this which I rate equally highly
hotukdeals.com/dea…083