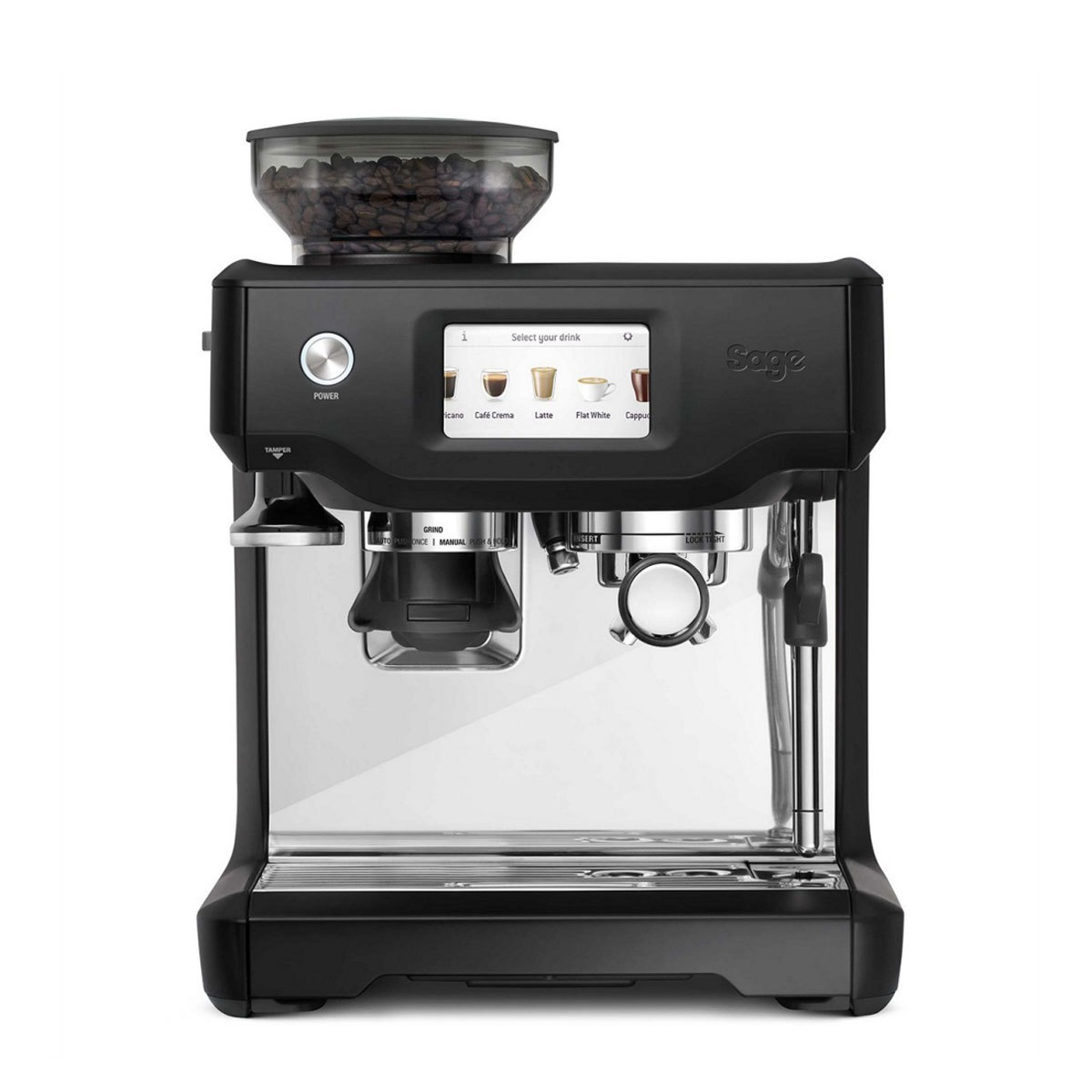 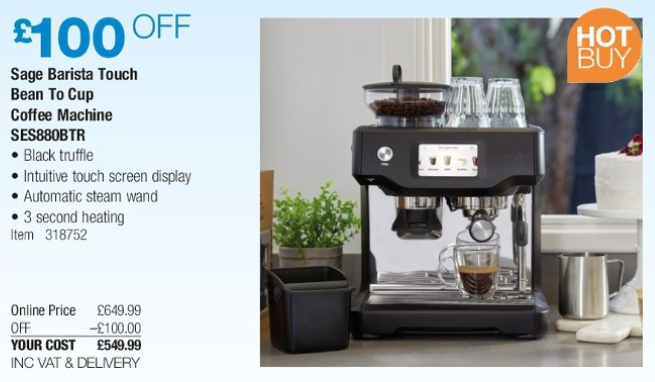 Is this better then delonghi prima Donna elite

Not sure if better then a delonghi ( which I have) it will boil down to price and looks.
13th Feb

Is this better then delonghi prima Donna elite

If you check a few coffee forums its a pretty well regarded semi automatic coffee machine. Has a PID sensor and produces decent coffee and very good foam as I already mentioned. The grinder is the only bit most aficionado's dont rate, it's ok but separates are better. But if you're looking for an all in one package which does much of the work automatically, then this is about the best you'll get (the next step up is the Oracle, which has auto tamp, but is much more expensive).

JL sometimes have Sage demo's on, so worth checking your local to see when the next one is. I was suitably impressed that it's been on my price watch since.

Hopefully they'll be one
13th Feb
See, I'm a coffee lover and I have a delonghi espresso machine that does the job but I feel as though I need something better and a bean to cup as well.ive found an awesome local roaster which is within walking distance too.

The thing is, I can't part with 500+ notes for a machine. I want to, the missus will kill me (which has never stopped me before) but I just can't justify it to myself either! Anyone got any recommendations of some decent 200 quid(ish) bean to cup machines....man I'm torn....can you tell?
13th Feb
I have a high end machine and I hate it, I wish I stuck with my Nespresso machine which was quick and easy, little cleaning and was better quality than most Beans I've tried. The other thing I've found is I get headaches all the time now, like I'm overdosing on Coffee, something that never happened with Nespresso.
13th Feb

I've recently purchased one from AO.Com for £108.95 who pricematched Hart's of Stur's offer which I think is still on. AO.Com delivered it to me the next day.

I have been using it alot, you get the lovely fresh coffee smell around the house.
Using freshly ground coffee makes the coffee taste great just like it's from my favourite coffee shop obviously this depends on your choice of beans or ground coffee.
13th Feb

Delonghi 4200 all day long.
Comes up on deal of the day every now and then on Amazon for £200, especially prime day / black Friday etc...

Had mine 4 years and it's fantastic


13th Feb
Voting hot. Looking to upgrade my Sage Barista Express and this is the next model up. I’ve been happy with the express once I got to grips with weighing out the beans and timing the shot but I would like to be able to get a better foam on the milk which this is supposed to do.

Preferred the chrome version but that’s not been this price at all.

14th Feb
Cracking machine. Have had one for a year. Love that its fully automatic. not a purists machine, but makes an amazing coffee once you dial it in properly and to be fair can be as manual as you want . And the biggest plus is that its wife friendly. one of the best purchases of last year for me
14th Feb
this requires tamping right, isnt that a bit a messy
14th Feb

this requires tamping right, isnt that a bit a messy

Yep and takes a bit of practice.

Got excited for a minute, thought it was cashback deal back again
16th Feb

Are Costco an authorised seller? As stated in the T’s and c’s
16th Feb

As another has already said the Delonghi 4200 is a great machine.

There was an Amazon Warehouse deal last month where they were selling Used - Like New for £160 (basically the box was damaged).

Are Costco an authorised seller? As stated in the T’s and c’s

If you mean the ESAM4200, I had one of those for a few years. It's a good machine, but IMO this is a big step up, especially in terms of foaming milk.

Largely the Delonghi machines are all the same, just cosmetic differences. Different physical size, digital display, auto or manual frother, etc. If you open them up, you'll see the innards are identical.

But they did change some things between the ESAM and ECAM range. And IMO some of those changes are worth spending more for, having gone from the ESAM4200 to the ECAM420. Firstly, ESAMS have a really convoluted internal design, making it a PITA to clean out errand grounds. Secondly switching between Espresso and Frothing is much faster. The ECAM 420 also allowed me to add a water filter, perhaps the newer ESAMS allow this but the one I had didnt have the slot in water chamber. And the ECAM420 is narrower, meaning it takes up less space on the worktop. It's also aesthetically better looking, which may or may not be important to you.

I just called them. Unfortunately this isn't available for Costco purchases as they're not on their authorised list.

Blah, I still ordered one after Shpocking the Melita Caffe-O we had. Would've been so much better with three extra promotional trinkets!
17th Feb

Guess it doesnt hurt to file the claim anyway

Does this mean any cash back offer won't apply either That would be far more painful.
17th Feb
Too many complaints of temperature issues- too low and inconstant temperature. What's the point of fast-heating water if I have to waste time with empty shots to reach high temperatures.
17th Feb

Fortunately Costco have a 90 day no quibble return policy (in practice they'll take it back long after that if you say its faulty). So not much of a risk to check for yourself. As the machine has lots of positive reviews as well.
17th Feb

Like any machine the portafilter needs to be up to temperature, and you can adjust temperatures in the settings.
17th Feb

To fill the claim you need to select a retailer, and Costco isn’t listed. Do any of the uk Hugh street retailers price match Costco?
17th Feb

I’d be interested in knowing this too, especially as John Lewis has it listed for £739
17th Feb

Businesses that trade on a different basis to John Lewis & Partners are not deemed comparable high street competitors. These include: outlets that operate only on the internet or through mail-order, showrooms attached to internet-only companies, pop-up or temporary shops, collection points, auction sites, factory outlets, membership clubs, duty-free shops, market stalls or home shopping channels.

Might still be worth a try though.
17th Feb

RS (they may ask for proof of Costco Membership), but I doubt they sell it.

JL dont. Not sure about Curry's.

This is the experience from TV threads. I'd probably still go with Costco for the customer service and ease of return. If it was cashback it would be a different story.
Edited by: "Mentos" 17th Feb
17th Feb
It’s a cracking price from Costco, I now seem to want the accessory pack as well though
17th Feb

Just had a quick check and there's the option to specify "other".
17th Feb

I know the feeling, just be thankful it isn't cash back as that would be far more annoying.

Looking at the pack, it's only really the Bodum cups i'd want. The machine already comes with a milk jug. Everything else would just take up space in a cupboard.
17th Feb
Amazing deal and the machine to me looks nicer in black. I had a delonghi b2c for 5 years and this knocks the socks off it. It is messy but worth it. Coffee taste better and the milk is hot, like coffee shop hot. Unlike the delonghi which get warm at best. The heating issues look to be down to poor sockets unable to provide the power needed. Mines hot. A little tip. Froth your milk twice at 50 degrees. You get even more foam!! Also i bought the melitta ts smart and sent that back because it made luke warm latte. If your a milk cofffee person get this machine. Even the wife doesnt mind the mess now she gets a brilliant latte.
19th Feb
Purchased - delivery in 2 days...sadly they do not stock this in store.
20th Feb
Update - ordered yesterday 2.15pm and delivered this morning 9am - can't fault Costco on their delivery
Edited by: "amzi160586" 20th Feb
20th Feb
Would anyone who has this mind measuring the temperature of the hot water out of the hot water dispenser please?

I would like to upgrade to something that has a hot water dispenser for long coffees like this. I had previously tried the nespresso creatista pro which has a dedicated hot water spout too. But it disappointingly dispensed hot water in the high 60s making the entire drink not hot enough (even in a prewarmed cup).

The barista touch seems to have the same thermojet system, but I’m wondering if it was nespresso getting involved in making the temperature lower and so this will be better, or whether it’s an issue with thermojet in general so this will be the same?
23rd Feb
Ordered mine on Friday.......can’t wait
23rd Feb
I know they told Fergee Costco doesn't qualify for the promotion. But probably worth filling out the form anyway, there is an option to select "other" as the retailer:

Worst case they decline it, but you might get lucky
Edited by: "Mentos" 23rd Feb
23rd Feb
Out of stock.