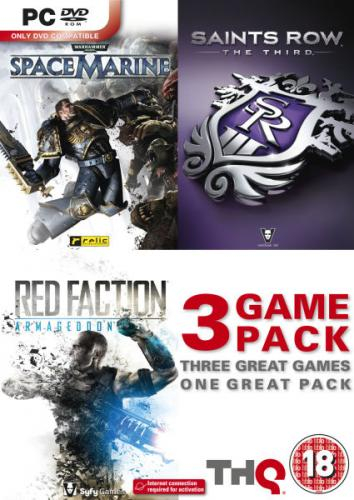 Description
Saints Row The Third:
Years after taking Stilwater for their own, the Third Street Saints have evolved from street gang to household brand name, with Saints sneakers, Saints energy drinks and Johnny Gat bobblehead dolls all available at a store near you. The Saints are kings of Stilwater, but their celebrity status has not gone unnoticed. The Syndicate, a legendary criminal fraternity with pawns in play all over the globe, has turned its eye on the Saints and demands tribute.
Refusing to kneel to the Syndicate, you take the fight to Steelport, a once-proud metropolis reduced to a struggling city of sin under Syndicate control. Take a tank skydiving, call in a satellite-targeted airstrike on a Mexican wrestling gang, and defend yourself against a highly-trained military force using only a sex toy in the most outlandish gameplay scenarios ever seen, igniting a city-wide war that will set Steelport on fire.
Saints Row: The Third gives you control of the Saints at the height of their power, and you live the life to show for it. Now Steelport is ripe for the taking, and it's up to you to make the city your own. Mould the skyline based on your choices, outfit your crew in classy gangster gear or furry costumes, and make life-or-death decisions that will change Steelport, and the Saints, forever. This is now your city. These are now your rules. Strap it on.


Space Marine:
In Warhammer 40,000: Space Marine you are Captain Titus of the Ultramarines, humanity's last hope for survival in a war-ridden future. Step into the armour of this superhuman warrior and use a lethal combination of deadly weapons to crush overwhelming alien forces. Fight against the savage Orks and the unholy forces of Chaos in a brutally violent world based on the richest science fiction fantasy ever created.
Storm Into Battle – Step fearlessly into the heart of combat as an unstoppable Space Marine. Never hide, never cower, just purge all that stand in your way.Unleash Visible Violent Death – Using an innovative new combat system, switch seamlessly from high-calibre ranged weapons to devastating close-combat strikes. Taking out an enemy has never been so satisfying.
Experience the dark future of Warhammer 40,000 – Jump into a rich universe of awe-inspiring landscapes, deadly enemies, immense battles and ruthless annihilation.Take the Battle Online – Form your own Space Marine squad or Chaos Space Marine warband and face off in 8 vs 8 online matches. Gain experience and unlock new weapons and armour to customize the Devastator, Assault, and Tactical Marine classes.

Red Faction Armageddon:
You are humanity's last hope for survival.
A long-dormant evil emerges from the caves of Mars, unleashing Armageddon on the planet's colonists. With this force stopping at nothing to cleanse the planet of life, mankind finds itself poised on the brink of extinction.
Red Faction: Armageddon expands on the critically acclaimed, best-selling franchise with new, groundbreaking challenges.
Hell On Mars - Darius Mason can only watch as the surface of Mars is destroyed. Seeking solace underground, an even greater threat emerges against humanity
Nano Forge - Unleash the devastating force of the Nano Forge with massive concussive blasts or reconstruct downed colonist defences with Geo-Mod 2.0
Martian Underground - The truth behind an ancient evil will force Darius to wage a battle across the devastated Martian surface, beneath massive frozen glaciers, and over rivers of broiling magma
PostTweetShare Share with WhatsApp Share with Messenger
Community Updates
Testing DealsTesting voucher code
If you click through or buy, retailers may pay hotukdeals some money, but this never affects which deals get posted. Find more info in our FAQs and About Us page.
New Comment Subscribe Save for later
12 Comments
18th Apr 2012
Amazing deal ppppppurchased!
18th Apr 2012
Haven't played space marine but SR3 is fantastic and Red Faction is pretty good too. Great deal
18th Apr 2012
It's a good price if you want all three so I've added heat, but make sure you want all three as the separate prices combined are not much more on download.

Also Saint's Row 3 is ripe for a reduction to around the £7 mark as it's been out a few months now, but right now this is the best price I've seen if you want these 3 games.
18th Apr 2012
can get saints row from pcworlddownloads for £7.99 if you use PCGAMER20 code.
18th Apr 2012
I guess that means you can also pick up Red Faction from PCWorldDownloads for £3.99 using that code bringing the total download price down to £18.83.

The deal still has it's merits though for people who prefer to have the discs, or have caps on their download limit.
18th Apr 2012
I have all 3 and i can safely say Saints Row 3 is the only decent game here.
18th Apr 2012
That's how hotukdeals is funded, and fair play to them as they only make money if you find a good deal so everyone wins. Well the OP don't exactly win anything except that special feeling of knowing the deal might be useful to others, or a bit of abuse/banter if it isn't.