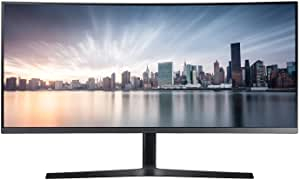 I would yes but I paid £260 from amazon France warehouse. If you’re spending this money go for something like this overclockers.co.uk/iiy…tml.

I have this monitor, real nice!

Would you recommend it for gaming?
6th Jun

I would yes but I paid £260 from amazon France warehouse. If you’re spending this money go for something like this overclockers.co.uk/iiy…tml.

100hz and freesync, this should be great for gaming. You will however need a decent PC with a very expensive graphics card card to run games at 100fps at UWQHD resolution.

Think at 5700XT would cut the mustard
6th Jun
Is this IPS or VA panel pls? Can't find that info on amazon site
6th Jun

Is that even available in the UK?

Don't underestimate a curved screen at this sort of size. I'm only 32" and I couldn't be without the curve.

6th Jun
I have this monitor and it's worth the money! Their brilliant. The quality of it is outstanding.
6th Jun

I’m looking to get something like this for working from home but I know very little about these. What 34inch would you recommend for mainly office work (email, spreadsheets, PowerPoint mainly)? Does a curved monitor work well for office work or better to get one that’s flat? Thanks for any advice you can give.
6th Jun

I wanted a new monitor for exactly these things. I went with the Philips 346b1c. I paid £470 for it but there have been cheaper deals. it's great, the curve really works. After 30 minutes use you won't notice the curve but it really helps. I don't use it for games but for office stuff fantastic.
6th Jun

Thanks for the help
6th Jun

Cheers, thanks.
6th Jun
Another question. The laptop has an i5-4300u in it and according to intel the max screen resolution via display port that it will support is 3200x2200 at 60hz. So will the laptop support 3440x1440? Any help again much appreciated.
6th Jun

Doing the same. Built in kvm, picture in picture etc.. Will pair up with a 32 4k that can double as the console gaming monitor.
6th Jun
Another question. The laptop has an i5-4300u in it and according to intel the max screen resolution via display port that it will support is 3200x2200 at 60hz. So will the laptop support 3440x1440? Any help again much appreciated


Unfortunately "support" doesn't mean that the game your playing will play seamlessly at that resolution. The i5 is the motor of your computer, what's the graphics card and how much memory has it got?
6th Jun

Hey thanks for answering. It is a work laptop so has just the onboard graphics for the processor, and on the intel website that’s what it states as the max resolution for the processor graphics. I’m not looking to play games, only work but would want to make full use of the 3440x1440 which obviously has an overall pixel number less than 3200x2200 but my concern is that I’m breaching one of the paramaters with 3440 higher than the 3200 and therefore might not be able to output onto the monitor at its highest resolution. Sorry if I sound like a complete idiot!

I own the Samsung and for the same money or more would go for that Philips, without hesitation. The Samsung is nice for sure, but the price is a lingering from a couple of years ago and curved monitors are less uncommon since then.

The Philips has better specs on paper almost almost across the board. Even the panel is Samsung, is it the same... who knows, wouldn't surprise me though.

I'd prefer to the Philips for the light sensor brightness alone, I've been finding the lack of auto-brightness a real PITA because when you have a huge monitor the light is way more intrusive and there's no quick change. (Also, if you use PIP to have a different sources on each side of the monitor, say, the difference in brightness can be even more of a problem and I doubt the Philips addresses that)

Also the Philips is 10" deep including stand while the Samsung is a foot deep, doesn't sound like much difference but 2" of my desk back sure would definitely be noticeable. Built-in speakers too? Neat freebie.

The Samsung may be technically better quality in non-obvious ways, I don't know. But the only obvious advantage to me is that it looks way nicer in terms of build, you can also route wires down the inside of the stand so they're invisible. But DisplayPort cable is really thick and there's no way it would fit all the wires if I were using all the ports.

Yeah, anyway. Lots of niggles like that. Very nice monitor, picture's great, not sorry I got it, but I think you'd be at risk of feeling a bit over-charged and behind the times unless a priority was it looking super slick on your desk because the options there are virtually none.

Oh, and for me personally it is a superlative upgrade from multiple monitors. I'll never go back.

Which monitor are you referring too?
Edited by: "slex88" 7th Jun
7th Jun

Which monitor are you referring too?

On preorder at over lockers, but you can buy it now at box overclockers.co.uk/iiy…tml
7th Jun
Just posted this if of interest for anyone...

hotukdeals.com/dea…d=7
11th Jun
Currently out of stock at amazon