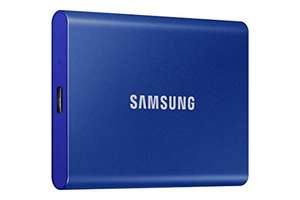 Monday 1st June 9am- for some reason the price keeps dropping, it's now £54

I took up the Game trade in offer today and decided to buy this to sit on top of my Xbox plugged in.

I've been watching it for last few days and price jumps between £55 to £59. Lol it's dropped 30p since I bought it. According to Camel this is the lowest price range it's been. Excluding the official Seagate SSD which is silly money this is in my opinion is the best of the rest. The 1tb version has been £87 from Samsung a few months back but that sold out in no time and it's another £30 for extra memory I don't need and it also takes it closer to that £100 psychological barrier where you think for a bit more I could have got the Series X.

512gb extra memory will be more than enough for me and for just over £55 it's not breaking the bank.

The only other thing that can beat this for speed will be if you make your own SSD with an enclosure which I might do one day.

FYI in blue only

Next best price is the T7 touch in black for £63 ish. Link to that below