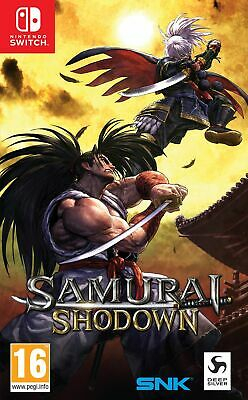 Releases today, cheapest before this is around £38, reliable seller also (99.9%). Glad I can finally take this masterpiece on the go!

Peerless warriors duke it out in 1700's Japan! 13 returning characters are joined by 3 completely new to the series. This latest installment takes place one year before the events of the original Samurai Shodown game, where tensions are still hot in the land of the rising sun! A game that threads the line between suspense and thrills! Classic Samurai Shodown concepts like the Rage Gauge, Lightning Blade, and Super Special Moves make their return! Feel your heart race as you're moments from death, only to turn the tables in one fell swoop! A true fighting game experience is waiting for you on the Nintendo Switch!

The original came out in 1993. This is the newest entry in the series.
10 Comments
25th Feb
I don’t know how they can justify these prices for a game from 1993, it’s crazy, I would expect a compilation for this price, I’ve not voted as it’s a good deal if your willing to pay this
25th Feb

The original came out in 1993. This is the newest entry in the series.
25th Feb

Yes it is. This makes me think it’s not selling well for them to be already discounting through eBay. Hopefully price will drop further soon, was hoping for around £25.

But definitely a good price at the moment from a good seller.
25th Feb

This came out last year on the PS4/Xbox One for around the same price
Edited by: "malachi" 25th Feb
25th Feb
Tempted but far too many switch games to get through to seriously consider this.
28th Feb
Is the netcode any good?
28th Feb

Is the netcode any good?

Played a few online matches, decent netcode, but only connected to Americans/Japan so far
28th Feb

I'm really hoping GGPO is implemented like it has been for Garou.