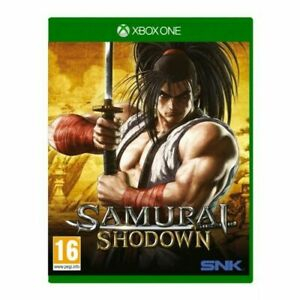 Samurai Shodown Xbox One (French and Dutch on cover, Plays in English) for £14.99 Delivered @ evergameuk / Ebay

**French and Dutch on cover**
**Game is fully English inside**

After more than a decade, Samurai Shodown is back! SNK is rebooting one of its most successful series, carrying on the legacy of past titles with a new game that retains the same thrilling battles of past titles in a graphically advanced package. Samurai Shodown's gameplay is driven by the tense atmosphere of being one strike away from death, and the exhilaration of defeating an opponent with overwhelming power and attacks. Taking place between the events of the original game and Samurai Shodown V, the new game carries on the legacy of the one true weapon-based fighter.
Features:
PostTweetShare Share with WhatsApp Share with Messenger
Community Updates
EBay DealsEBay discount code
New Comment Subscribe Save for later
3 Comments
27th Jan
Cue the ‘will this work on my PS4’ comments
27th Jan
Will this work....haha..
27th Jan
Love this game, shame there isn't much of a community playing online right now