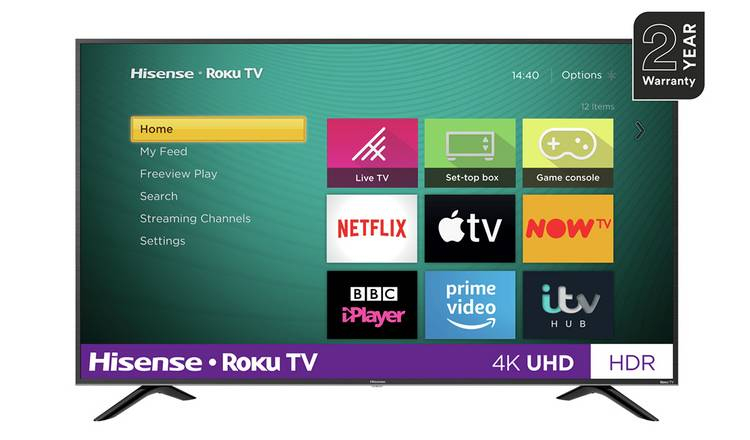 This is the first time these 4K Roku TV's from Hisense have dropped below the Manufacturer's Suggested Retail Price (MSRP) of £649.00 and they are (currently) still being exclusively sold through Argos in the UK, so you won't find a better deal than this one. Other screen sizes (43-inch, 50-inch, and 55-inch models) are also being discounted and this 65" model represents the third biggest saving versus the usual selling price. Essentially, it's a 4K smart television with the "smarts" provided by having a Roku player built-in to the TV and (as an added bonus) you also get 'Freeview Play' with all the additional catch-up services that are included. If you've been looking to upgrade your television to a 4K-capable model, then you could do far worse than to invest in this one at under six hundred and eighty quid. For your money, you'll be getting access to Netflix, NOW TV, Prime Video, Apple TV+ / iTunes Movies & TV, BBC iPlayer, ITV Hub, All 4, My5, TVPlayer, UKTV Play, Shudder, YouTube, Google Play Movies & TV, Rakuten TV UK, Shudder, along with Freeview Play for Horror Bites and CBS Catchup On-Demand plus your choice of 8,700+ additional Roku channels (apps) filled with streaming content. Moreover, Disney+ is due to arrive at the end of March 2020... so you'll soon have access to that, as well !! ‌ ‌
PostTweetShare Share with WhatsApp Share with Messenger
Community Updates
Argos DealsArgos discount code
If you click through or buy, retailers may pay hotukdeals some money, but this never affects which deals get posted. Find more info in our FAQs and About Us page.
New Comment Subscribe Save for later
8 Comments
25th Dec 2019
Any chance of an HUKD moderator adding this deal to the Roku tag list? Only it is an officially licensed Roku product (SEE: roku.com/en-…-tv FOR DETAILS).

How are these so cheap? Are they just crap?

How are these so cheap? Are they just crap?

They are not bad...well...going by reviews and the fact it has Roku built in. This means you dont need separate units for prime, nowtv and Netflix. Basically it's an all in one solution. And with Roku you are guaranteed of regular updates, a stable O/S etc...
26th Dec 2019
I’ve got this TV. Love it, would definitely recommend.