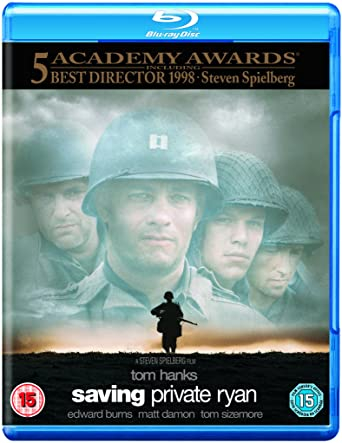 Since its release in 1998, Steven Spielberg's D-Day drama Saving Private Ryan has become hugely influential: everything, from the opening sequence of Gladiator ("Saving Marcus Aurelius") to the marvellous 10-hour TV series Band of Brothers, has been made in its shadow. There have been many previous attempts to recreate the D-Day landings on screen (notably, the epic The Longest Day), but thanks to Spielberg's freewheeling hand-held camerawork, Ryan was the first time an audience really felt like they were there, storming up Omaha Beach in the face of withering enemy fire. After the indelible opening sequence, however, the film is not without problems. The story, though based on an American Civil War incident, feels like it was concocted simply to fuel Spielberg's sentimental streak. In standard Hollywood fashion the Germans remain a faceless foe (with the exception of one charmless character who turns out to be both a coward and a turncoat); and the Tom Hanks-led platoon consists of far too many stereotypes: the doughty Sergeant; the thick-necked Private; the Southern man religious sniper; the cowardly Corporal. Matt Damon seems improbably clean-cut as the titular Private in need of rescue (though that may well be the point); and why do they all run straight up that hill towards an enemy machine gun post anyway? Some non-US critics have complained that Ryan portrays only the American D-Day experience, but it is an American film made and financed by Americans after all. Accepting both its relatively narrow remit and its lachrymose inclinations, Saving Private Ryan deserves its place in the pantheon of great war pictures.--Mark Walker
PostTweetShare Share with WhatsApp Share with Messenger
Community Updates
Amazon DealsAmazon discount code
New Comment SubscribeSave for later
12 Comments
29th May
Superb film. I believe it was also the launchpad for Vin Diesel. Not saying that’s a good thing, but may help someone in a quiz.
29th May

F&f was his launch pad.. he lasted a whole 5 mins before the heroic scene "give this note to my dad. It's got blood on it"
29th May

I think you’re wrong, he wrote a hand written letter to Spielberg who was so impressed he cast him in this, thusly, putting him in the spotlight to be cast in F&F. I think it’s widely acknowledged in the film world.
29th May

Genuinely thought it was F&F but guessing SPR seems more plausible because it was an extremely small role for Vin Diesel.
29th May
Anyone dissing Vin needs to see Boiler Room. Legitimately the 2nd best actor in that film behind Giovannni Ribisi and ahead of Affleck.
29th May

His minor role in SPR epitomises his ability to act.

Off topic, I personally didn’t like Collin Farell but after watching True Detective Season 2, realised he’s a very talented actor too!

Some actors are typecast for certain specific roles unfortunately this seems to be the case with Vin Diesel.
29th May
Saving Private Ryan...best war movie ever imo.
29th May
Back in 1998 £4 was the equivalent of $20,000 so DEAL FOR ME
Edited by: "shivato" 29th May
29th May
Great film. Even 22 years on. One film that shocked me when I watched it at the age of 12. (Yes I was underage). Made me fascinated with WWII as the stuff taught at school never explained it to the detail this shows
29th May

Yeah I think spielberg saw strays then he got the private ryan part. Vin was well known before fast and furious because of boiler room and pitch black.
31st May
£7.99?? Must have missed out. One of my favourites