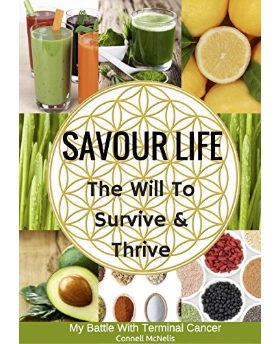 "Savour Life - The Will To Survive & Thrive, shares the story of Connell McNelis who was diagnosed with terminal cancer in March 2013 aged 32. Cancer which then spread from his kidney to his skin then later to his brain. The odds have always been against him, given a prognosis of as little as 12 months and statistics showing that around only 5% with Stage 4 kidney cancer survive their cancer for 5 years or more after they are diagnosed.

There is so much stigma attached to cancer and being diagnosed is extremely frightening. This book shares the journey of Connell's battle with terminal cancer in a positive light with the ultimate aim to“Savour life”. This is a very practical book for anyone diagnosed with cancer or anybody just interested in taking control of their own health.

Connell has put his body through surgery, chemotherapy drugs, and radiation but the main lessons he learned is how to detoxify and rebuild the body to trigger the immune system to take control again and allow the body to work at optimum level. He has been carrying out extensive research and has been living and breathing fighting this with everything he has.

If you would like to explore natural alternative options either on their own merit or as complementary therapies to whatever conventional treatment you may be having, then this book walks you through protocols that Connell has carried out over the years.

Connell comments that even if these protocols only gave him an extra week to live he still would have followed them, never mind still being here years later from his initial diagnosis.