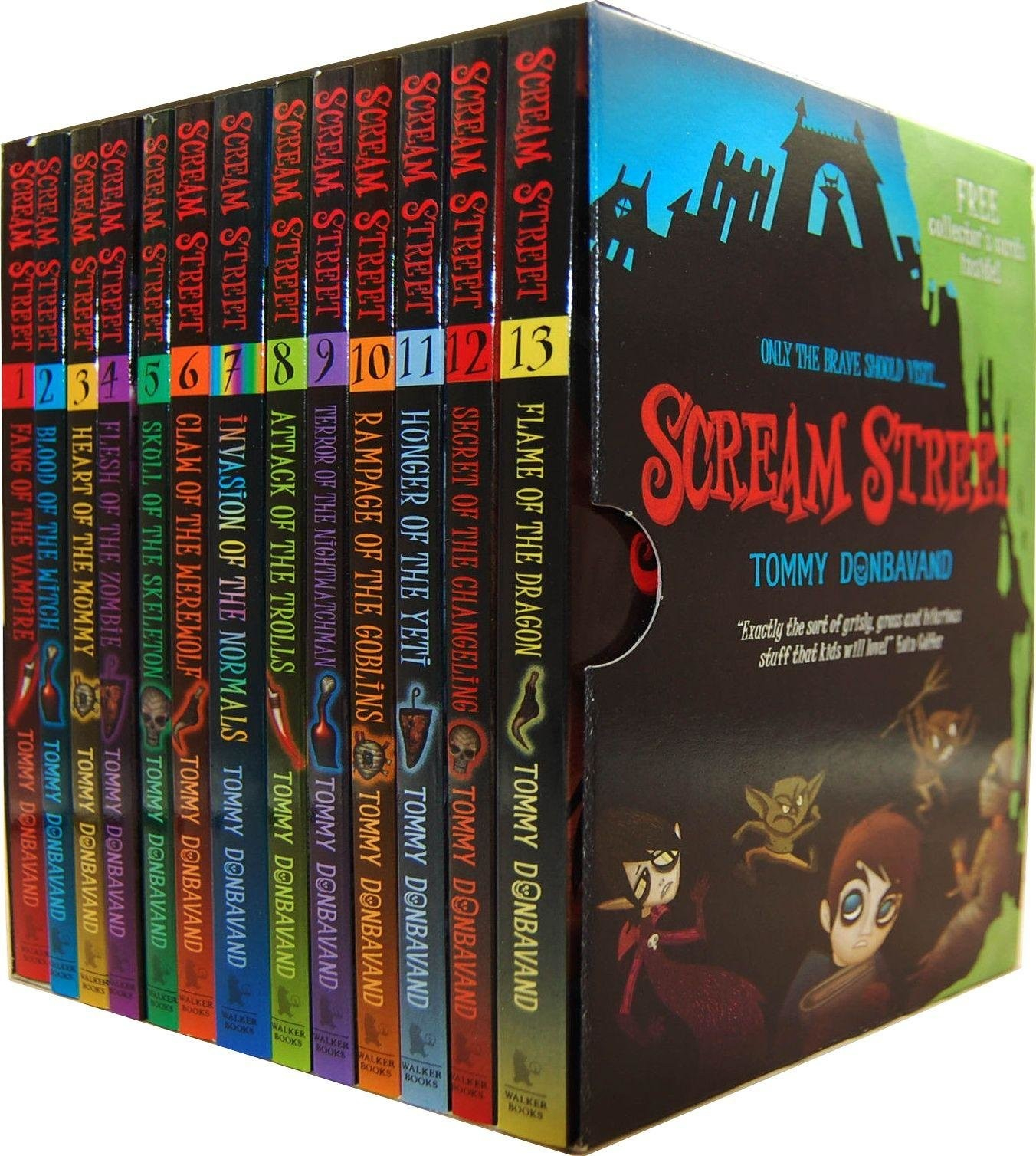 Scream Street : Flame of the Dragon

The thirteenth - and final - crazy adventure is there in this hugely popular comedy horror series for ghouls and girls! Having been banished to the Underlands by Acrid Belcher, the evil head of G.H.O.U.L., Luke, Resus and Cleo begin their thirteenth adventure fighting for their very existence. And life doesn't get much easier from there - the quest to return the sixth and final relic will take them to a dragon's lair in China, after which they must overcome the not-so-small problem of a deluded slime beast hell bent on creating an evil new world order. Once again it's up to the trio to save Scream Street - but will they fall at the final hurdle? Visit our associated website for competitions, short stories and new issues of Scream Street's own newspaper, "The Terror Times". There are four free collector's cards in each book.

Scream Street : Secret of the Changeling

This is the twelfth crazy adventure in this hugely popular comedy horror series for ghouls and girls! Just as Luke, Resus and Cleo are working out how to return the fifth relic, a whole new problem presents itself: Eefa Everwell's toddler niece, Poppy, has been replaced by a changeling! And the real Poppy is being held captive in the fairy realm by the evil Crimson Queen...Eefa and her sister are inconsolable, and the three friends vow to rescue the child and bring her safely back to Scream Street. However, the fairy realm holds plenty of surprises - most of them bad. And when Resus becomes tempted to change sides, things get a whole lot more complicated...Visit our associated website for competitions, short stories and new issues of Scream Street's own newspaper, "The Terror Times". There are four free collector's cards in each book! Ten foreign editions now sold! Cliffhanger ending to the final book in the series, "Flame of the Dragon", coming October 2011.

Scream Street : Hunger of the Yeti

The eleventh crazy adventure in this hugely popular comedy horror series for ghouls and girls - with four free collector's cards inside! Given that rock zombie Vein is now living in deepest darkest Tibet, the quest to return his tongue proves surprisingly easy for Luke, Resus and Cleo. What the trio hadn't bargained on, however, was a ravenous baby yeti stowed away in Resus' cloak and following them home! When the yeti's angry mother appears Scream Street in search of her missing offspring, things really start to get hairy. Meanwhile, the clock is ticking...

Scream Street : Rampage of the Goblins

Luke, Resus and Cleo find themselves in Egypt, on the hunt for their old friend Heru, to return his heart. However, what they hadn't reckoned on was their old enemies the goblins getting there first!0

Scream Street : Terror of the Nightwatchman

When Luke and Resus wake up to discover that Cleo has been kidnapped, the intrepid pair follows a perplexing trail into a strange new GHOUL community. Here they stumble upon a terrible plot involving the much feared Nightwatchman, who feeds on children's dreams in order to satisfy his own evil thirst for power.

Scream Street : Attack of the Trolls

This is the eighth crazy adventure in this hugely popular comedy horror series for ghouls and girls! Now that Luke, Resus and Cleo have learnt how to rid Scream Street of invading normals, they're keen to begin their new quest right away. First stop, Count Negatov's castle! As the trio make their way through the bleak, mucky wilds of Transylvania, it seems that this adventure will be dull, but easy. Until, that is, they're kidnapped by trolls. 'Exactly the sort of grisly, gross and hilarious stuff that kids will love!' - Eoin Colfer. 'Lightning-paced, bloodcurdling fun. I wish I'd been able to visit Scream Street as a kid!' - Darren Shan. This title includes four free collector's cards inside. Wickedly funny Scream Street website is updated regularly with competitions, short stories and new issues of Scream Street's own newspaper, "The Terror Times".

Scream Street : Invasion of the Normals

Now that Luke and his parents have decided to stay, their quest to open a doorway out of Scream Street seems but a distant memory. Finally, it's time to just sit back and relax...Or is it? Luke, Resus and Cleo soon discover, to their horror, that the doorway cannot be closed - and not only that, but others from the real world are pouring in by the dozen. Eager to witness the 'freaks' in action, the crazed normals are frightening the residents of the street out of their wits. Luke and his friends need to work out how to close the doorway, and fast - but despite their best efforts, the solution seems to elude them. As Sir Otto continues to reap the benefits of this lucrative new freak-tourism, things look increasingly grim for the community. Is this the end for Scream Street as we know it? Four full-colour collector's cards are there inside!0

Scream Street : Skull of the Skeleton

The Headless Horseman, the world's most famous ghost, makes a personal appearance at Everwell's Emporium to launch his new perfume, 'Decapitation pour l'Homme'. His overbearing gargoyle manager, however, is not impressed when the celebrity's head is stolen during the event.

Scream Street: Claw of the Werewolf

Luke is now just one relic away from opening the doorway back to his own world and taking his parents from the terrors of Scream Street - but the final search will plunge him into his most dangerous adventure yet. This sixth and final relic is almost in Luke's grasp, but will it ever be his...?0

Scream Street: Fang of the Vampire

After Luke Watson transforms into a werewolf for the third time, he and his parents are moved to Scream Street. Luke learns that the founding fathers of the community each left behind a powerful relic. Collecting together all six is his only hope out of the street. But his new landlord Otto Sneer is determined to thwart him at every turn.

Scream Street:4 Blood of the Witch

Luke is back and on the hunt for the second relic in this spooktacular next instalment in the "Scream Street" series. In Scream Street, discarded blood from cuts, grazes and nosebleeds is filtered out of the sewerage system and channelled to the vampire residents via taps in their kitchens. Urgh! In an underhand attempt to force Luke to return Samuel Skipstone's powerful "Tales of Scream Street", Sir Otto Sneer cuts off the blood supply to the house of Luke's best friend, Resus Negative. Desperate for blood, Alston Negative, Resus' father, enrages a group of sewer rats, inadvertently creating a swarm of vampire rodents which rise up out of the sewers to attack the residents of the street. Luke, Resus and Cleo must save Scream Street from the rats while searching for the second of the founding father's relics, a vial of witches blood - and without being turned into vampires themselves.

Scream Street:3 Heart of the Mummy

Scream Street has been shrouded in constant night for as long as the residents can remember, but when the streets become covered with millions of crawling spiders, suffocating everything in their path with their thick webbing, the residents realize they've had it easy up till now.

Scream Street:2 Flesh of the Zombie

This is the fourth grisly instalment from the "Scream Street" series. Party-loving zombies Doug, Turf and Berry are psyched, man! The underworld's greatest rock festival, Deadstock, is taking place in Scream Street and the community is soon swamped with rotting revellers from across the globe. It appears that Luke, Resus and Cleo will have a soundtrack to their search for a slice of flesh from a long vanished zombie - the fourth relic. Luke needs to open a doorway and take his parents home. Sir Otto Sneer, however, has other plans. After an unsuccessful attempt to pull the plug on the concert, he sets about enforcing ancient laws to censor the lyrics of the headlining band, Brain Drain. The race is on as Luke tries to discover the fourth relic before the evil landlord banishes the zombies - and with them any chance he has of leaving the street.
PostTweetShare Share with WhatsApp Share with Messenger
Community Updates
Books2door DealsBooks2door Discount Codes
If you click through or buy, retailers may pay hotukdeals some money, but this never affects which deals get posted. Find more info in our FAQs and About Us page.
New Comment Subscribe Save for later