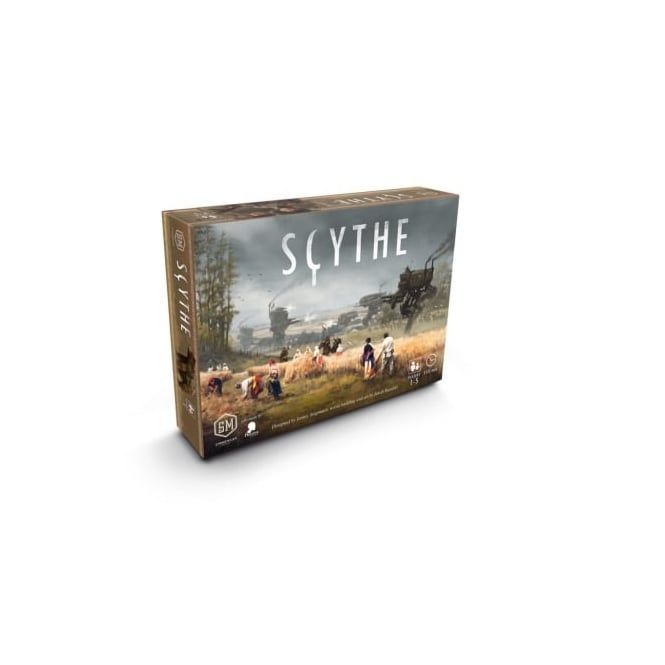 Edit: just spotted that there's a potential 5% discount with student beans as well if anyone has that.

One of my favourites. Great game and although looks complicated it isn't particularly. Better with the invaders from afar expansion which adds two new factions for some added variability.

It is a time of unrest in 1920s Europa. The ashes from the first great war still darken the snow. The capitalistic city-state known simply as "The Factory", which fueled the war with heavily armored mechs, has closed its doors, drawing the attention of several nearby countries.

Scythe is a Worker Placement/Economic Engine board game set in an alternate-history 1920s period. It is a time of farming and war, broken hearts and rusted gears, innovation and valor. In Scythe, each player represents a character from one of five factions of Eastern Europa who are attempting to earn their fortune and claim their faction's stake in the land around the mysterious Factory. Players conquer territory, enlist new recruits, reap resources, gain villagers, build structures, and activate monstrous mechs.
PostTweetShare Share with WhatsApp Share with Messenger
Community Updates
Magic Madhouse DealsMagic Madhouse voucher codes
If you click through or buy, retailers may pay hotukdeals some money, but this never affects which deals get posted. Find more info in our FAQs and About Us page.
New Comment Subscribe Save for later
25 Comments
29th Dec 2019
On my wishlist. No rush to get as so many games to play so waiting for a second hand deal for under £40 to come along or an amazing deal with a voucher.

This must be one of the cheapest new prices its been, heat.

Thanks, it was slightly cheaper with the Chaos Cards code before Christmas but went oos and code now expired.
It's a great game and mechanics work really well. Only problem I have is played it too much so you sort of play it the same way now, even though there are multiple routes to victory points.
I'll probably pick the rise of fenris expansion up and give it another go as it really is a top game, it's between this and Viticulture as my number 1.
29th Dec 2019

That's interesting, We have found that with a few games, once you find the optimal route/path for victory points, it is almost pointless playing any other way unless your opponent forces your hand etc.

Maybe like you say, if you like the game, expansions are the way to go to make the game more interesting.
29th Dec 2019

Yep that's exactly what I meant. We also find that if you make a few mistakes early on it is very hard to pull it back round again.
Still a great game though
29th Dec 2019

How do you go about finding second hand games? Just via ebay and charity shops? I'd like to swap some games out for new ones, too
29th Dec 2019

There's the geek market on bgg that sometimes does swaps. Need to find a willing UK member though.
I've not found any "modern" ones in charity shops but have found a few decent ones (blokus 3d being one of them). I don't live where there is a massive active gaming community but if you have a local game store then might be worth asking them as may have ex display/demo copies. Or know someone looking to offload. Same with boardgame cafes?
29th Dec 2019

There's some big board game groups on Facebook where you can buy and sell loads of game. There's where I get most of my second hand games.
29th Dec 2019

Ahh, I don't really do much Facebook but will have a look. Thanks, could you link to the right group please?
29th Dec 2019

"Board game and trading chat UK" is the biggest and best - not just for buying/selling.

I rarely buy new games anymore (unless Jay posts an unmissable game on here!) and only use facebook to buy second hand, condition is always great as people like to look after their games. Like berek4breakfast says "Board game and trading chat UK" is the biggest and best, loads of information in the group and friendly community.

Jay don’t do it. We are members of these groups. If you think you spend too much money on games now then these groups are next level when it comes to buying too many board games!
29th Dec 2019

I scout Dominion expansions a lot on eBay and Gumtree (love Dominion). If you want to swap some games I really recommend selling them on eBay; for some reason they really retain their value well (you might even make all your money back).

Thanks, I shall proceed with caution
29th Dec 2019

Haha, I'm usually quite strong but my downfall is KS. I'll probably be able to resist buying loads of things but might see what is available. It can't hurt to look right...
29th Dec 2019

I paid about £15 more than this and am extremely happy with the investment. Currently had about 30 hours play out of it and after a bit of a break will dust it off again.
If only I could be bothered to paint the miniatures. Rising Sun is taking me ages to paint so this is well down the list.

29th Dec 2019
Request to join FB group submitted. Unrelated, but second mortgage also applied for
29th Dec 2019
What have I done, first post I saw was someone selling Yokohama... This could end badly, must resist.
Edited by: "jayhutton10" 29th Dec 2019
29th Dec 2019
Sorry i asked how and where to swap board games!!

There are some absolute bargains on there, but you have to be quick. Everyone knows the price point of games so if someone is selling a game cheap it usually sells within minutes, if not seconds. Luckily my Facebook obsessed wife have picked up a few gems.

My father in law found Twilight Imperium in a charity shop somewhere in Shropshire. He bought it for £2.50 as he knows I like games. He had no idea what it was but it "looked good".
30th Dec 2019

Awesome, I picked up colditz for 50p from a jumble sale about 25 years ago. Turns out it's the 70s version with the red Cross pack in it
I'm keeping it now though
13th Jan
Back up in price, expires