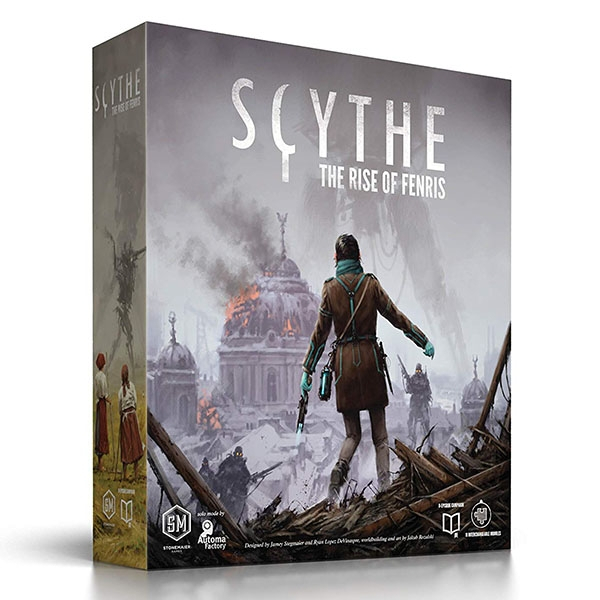 Price for the expansion only but a pretty decent saving with the code. Not played this expansion yet but would really like to, need to dust scythe off first as its a great game but played it a little too much so the expansion should add some variability.

NBP is Amazon. Code valid 17-19 December. Thanks to @loonyjetman for the code

Empires have risen and fallen in the aftermath of the Great War, and Europa stands on the precipice of a new era. The economy is robust, morale is high, and defenses are strong. There are reports from the countryside of strange soldiers with glowing eyes, but they seem distant and harmless.

Scythe: The Rise of Fenris, the conclusion to the Scythe expansion trilogy, enables two different options for any player count (1-5 if you have Scythe; 1-7 players if you have Invaders from Afar):

Campaign (8 games): The story of Scythe continues and concludes with an eight-episode campaign. While the campaign includes surprises, unlocks, and persistent elements, it is fully resettable and replayable.
Modular (11 modules): Instead of—or after—the campaign, the new modules in The Rise of Fenris can be used in various combinations to cater to player preferences. These modules are compatible with all Scythe expansions, and they include a fully cooperative module.
While the exact nature of the episodes and modules will remain a mystery (most of these components are in 5 secret tuckboxes and on 6 punchboards), the components in this expansion include a detailed episodic guidebook, 13 plastic miniatures, 62 wooden tokens, 2 custom dice, 25 tiles, and 100+ cardboard tokens.

PostTweetShare Share with WhatsApp Share with Messenger
Community Updates
365games.co.uk Deals365games.co.uk promo code
If you click through or buy, retailers may pay hotukdeals some money, but this never affects which deals get posted. Find more info in our FAQs and About Us page.
New Comment Subscribe Save for later
8 Comments
18th Dec 2019
Ooooo tempting!
18th Dec 2019

Tell me about it. There might be a couple more 365games deals from me before the night is out. Some bargains to be had but don't want to spam them
18th Dec 2019

Spam away!!!
18th Dec 2019
Great minds haha! I ordered this not long ago using the code, though not sure when it will actually get played - I haven't yet played anywhere near as much (basic) Scythe as I'd like to. And I've got Legendary Encounters X-Files to play yet too... oops!
18th Dec 2019

How odd! I'd not thought about it for a while then as soon as you mentioned the code it popped into my head
You might be getting a few more mentions yet
19th Dec 2019
Great Code
19th Dec 2019

By pure accident I assure you all