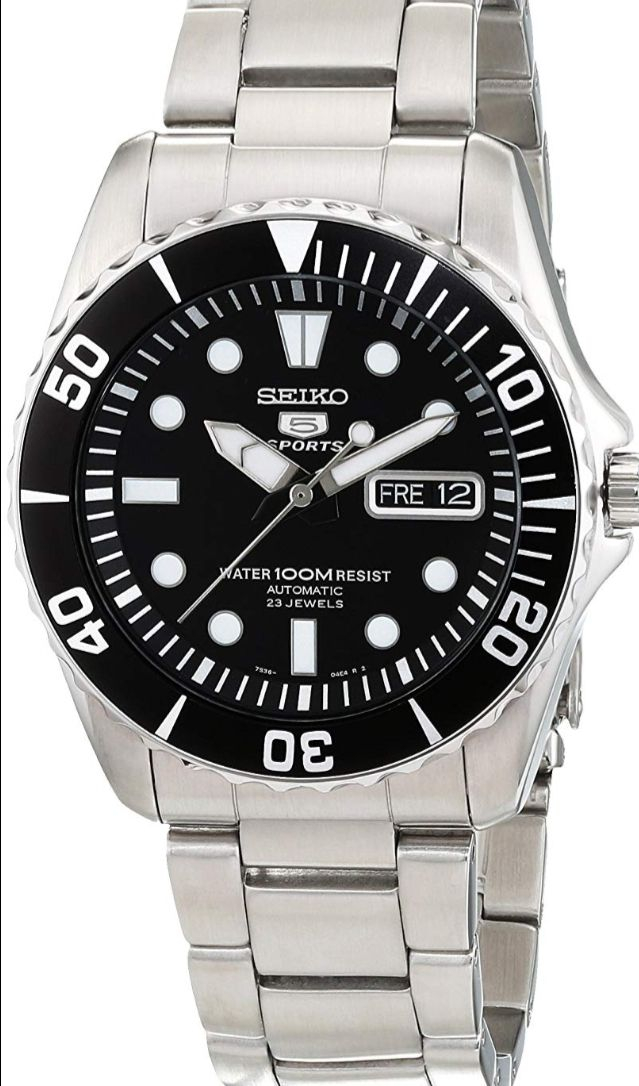 The real deal! It’s manly and rugged, yet sophisticated enough to charm a lady. Neither too light, nor too heavy, the 23 Jewels Seiko Automatic stands up to lots of wear and tear and is a choice for professionals. It’s large, but not extra-large and the size has stood the test of time.
Features:

Thickness: 13 mm
Bracelet Width: 22mm
PostTweetShare Share with WhatsApp Share with Messenger
Community Updates
Creation Watches DealsCreation Watches voucher codes
If you click through or buy, retailers may pay hotukdeals some money, but this never affects which deals get posted. Find more info in our FAQs and About Us page.
New Comment Subscribe Save for later
Top comments
30th Nov 2019
"sophisticated enough to charm a lady"!! Who writes this crap, Swiss Toni?!
30th Nov 2019
You really need to include the caveats in relation to import duties/fees and VAT that will or may apply to any purchase from Creation Watches depending on delivery options and luck. FREE DHL delivery is never “free”, or at best very, very, very rarely “free”.

Would suggest paying £2 more for the SNZF17J1 the “J” model.

Purchased the SNZF17J1 a year ago when Royal Mail was approx £7 and total price sub £100 and it came through without additional fees. You pays your money, you take your chance.

Add Royal Mail at £12.30 and it’s £137.30 with a good chance of avoiding additional costs, but minus box and a questionable guarantee.

This is link to “J” model from last year and some info.

Link
Edited by: "Baldricky" 30th Nov 2019
35 Comments
30th Nov 2019
You really need to include the caveats in relation to import duties/fees and VAT that will or may apply to any purchase from Creation Watches depending on delivery options and luck. FREE DHL delivery is never “free”, or at best very, very, very rarely “free”.

Would suggest paying £2 more for the SNZF17J1 the “J” model.

Purchased the SNZF17J1 a year ago when Royal Mail was approx £7 and total price sub £100 and it came through without additional fees. You pays your money, you take your chance.

Add Royal Mail at £12.30 and it’s £137.30 with a good chance of avoiding additional costs, but minus box and a questionable guarantee.

This is link to “J” model from last year and some info.

"sophisticated enough to charm a lady"!! Who writes this crap, Swiss Toni?!

Har, that's quite funny. The sort of blurb you usually see on Aliexpress listings (usually in Chinglish, which is kinda charming in its surreal way).
30th Nov 2019

"sophisticated enough to charm a lady"!! Who writes this crap, Swiss Toni?!

And I quote...
'Buying jewellery for a beautiful woman is a lot like making love to a beautiful woman. First you check the size of her ring to make sure it will fit. Then you end up giving her a pearl necklace.'
30th Nov 2019
any views on or experience of this seller? I've been looking at the Seiko SKX007J at £255 but concerned as to whether it'll be genuine / boxed / new etc (no offence intended)
be grateful for replies
30th Nov 2019

Yes .... As have many on here. Gotta shoot across town but if you are after an SKX007 at that price, you really (imho) need to read this thread. I think I put a link on there also comparing the Mini a turtle to the SKX. Link

I can post some pics of the Turtle, still haven’t done more than set up to check accuracy.

many thanks for the reply, that is a bargain/steal and probably what I'll go for, cheers
30th Nov 2019
Paid import fee 17 pounds for seiko 5
30th Nov 2019
Just received 2 watches from this site and chose the slow mail option and still got charges of £18 for each watch. Still can't complain as they were still cheaper than getting in the UK.
30th Nov 2019

Which postal option did you choose? Free DHL? Free airmail or paid Royal Mail?
30th Nov 2019
I have this watch with the red and black bezel. It's brilliant, the most rugged watch I've owned. I've banged it a few times on door frames and all sorts and it hasn't even marked. Had some good compliments and a nice size.
Edited by: "GaryOConnor" 30th Nov 2019
30th Nov 2019
Fantastic watch
30th Nov 2019
Hot. Good watch for this money.
I've never been hit with import fees when I selected Airmail - luck of the draw though I guess.
30th Nov 2019

Where did the packages say they were shipped from? What were the values? Always good to hear recent first hand reports.
Edited by: "Baldricky" 30th Nov 2019
30th Nov 2019

I have one, got it 4 years ago from CW. Paid £92 back then and didn’t have to pay any taxes. Watch is still going although has slowed down, think this is my fault tho as I leave it on constantly, including DIY!
30th Nov 2019

The popular circa £100 watches seemed to ship from Ireland last year if paying Royal Mail delivery. Mine did that last year as did colleagues. How that all works I do not know.
30th Nov 2019
I paid £40 custom charge for a £150 watch from them
1st Dec 2019

Be aware that you may get import duties and if something goes wrong with the watch you have close to 0 chance of relying on the warranty or on creation watches accepting a return or offering a refund. You usually also don't receive a proper/original box for the watch. The reviews on their website are fake/no negative reviews are published.

As long as you are prepared to take those risks, they're fine.
1st Dec 2019

I recall when the SKX007 was avaialable for around the £100 mark, owned a few and always sold them on, not because they where not a nice watch but because the movements where so inaccurate, even after spending hours regulating they would all drift back, you hear about people who regulate them to a few seconds a day, not sure i believe that. At the price they are now I would not even bother, I would either go quartz or buy a diver with eta movement, more expensive but worth it.
1st Dec 2019

Yeah the movement is apparently bulletproof and can be pretty accurate, although that wasn't my experience. The 4R36 in the Turtles has been way better for me - all of mine have been consistently within around 5 secs per day
Edited by: "_b1ff" 1st Dec 2019
1st Dec 2019

Yep and at £250 ish plus a potential (likely) £50 in fees/duties, the SKX is not really a consideration these days. Particularly when you now have the Turtle and the Mini Turtle which is available UK AD at £239. Then of course the Samurai can be had around £300 including the Padi version. 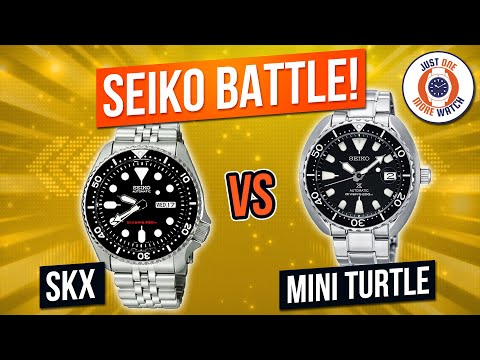 People go on about how bulletproof they are and my thoughts are, a good quality movement is made to tight tolerances , where as the Seiko is not, that is why it will require less maintenance than a quality movement, of course the down side is they are not very accurate and my findings with every watch with the 7S26 movement is they are poor time keepers, of course years ago when they where £80 you could forgive that, now they are £200 - £300 it is not so good at all.
1st Dec 2019
For the last few years the 'J' Japanese made version it's mfctrd next to the other versions, if it's old stock there will be a difference.

The mini turtle is nothing like an SKX, funnily enough it is like.. a Turtle (yet not actually much smaller),
the comparison is crazed.

Don't buy an SKX009 (though it's better than 007) new, buy used
Watch prices went up like house prices recently, only more expensive ones seem worth investing in.

This is the replacement for SKX -
lowryjewellers.com/wat…BwE

Try on as many watches as you can, even try ones you don't like the look of, you may prefer 4 or 9 o'clock crowns on the wrist etc.
Really try not to buy Grey, pay a little more for peace of mind.
But if I was to buy import Glycine from eBay would be my choice.
1st Dec 2019
Freeing up space on my phone I found images of the SNZF17J1 I got back in 2018. Royal Mail, flat packed Non OEM Box. 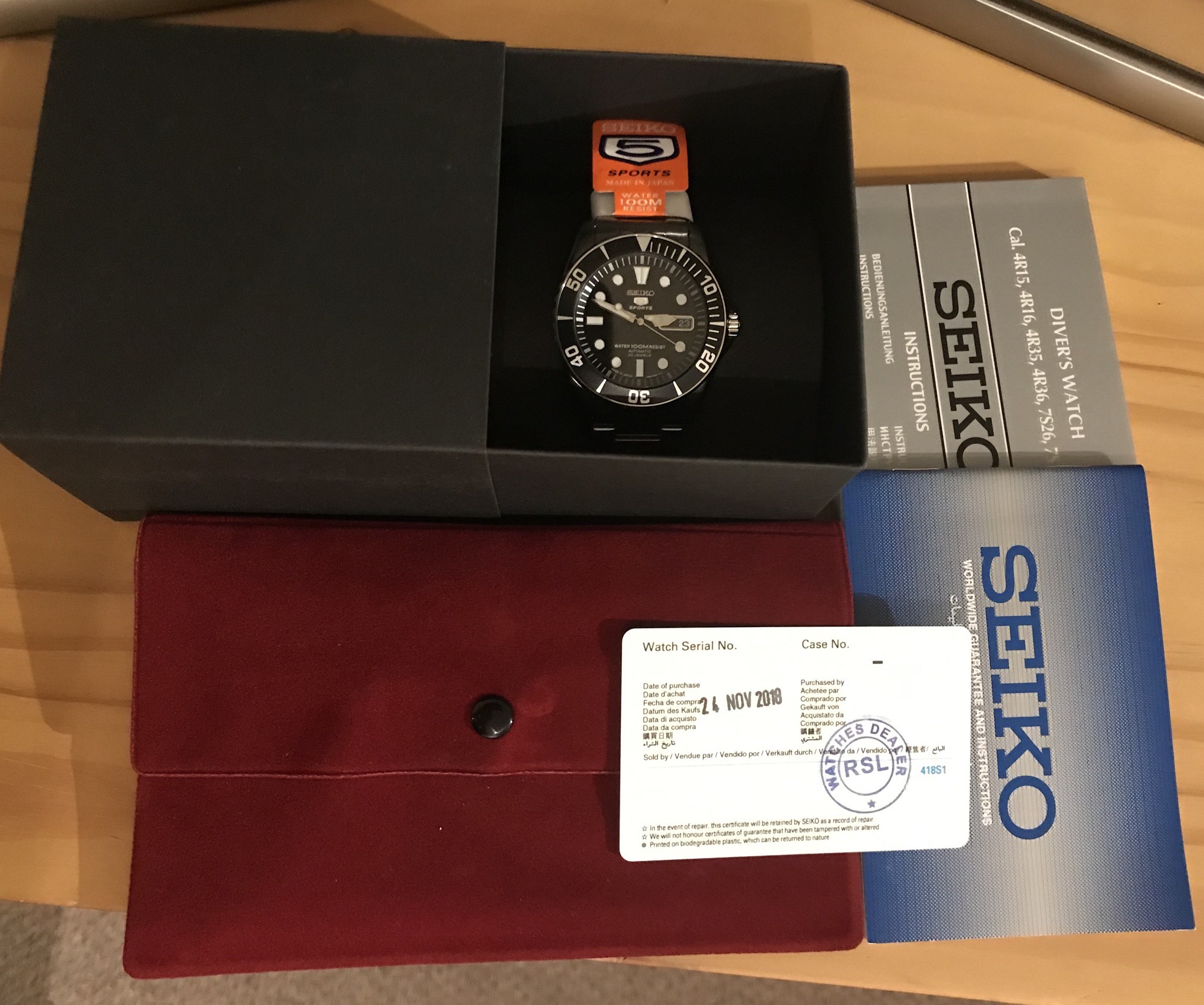 1st Dec 2019
If you want value for money this SNZF17K is a great unwarrantiedbuy, if it's a prezziee for a young person, perfect.
If you have a bit more money SRPD in Blue is a beauty and worth the cash and actual warranty.

The mini turtle is nice, but I was in a Seiko Outlet that was selling actual Turtle for £199! And they felt immediately comfy on the wrist with full pillow case at the start of 2019 so I couldn't pay it's price.

You say that’s the Seiko Sport 5 is the replacement for the SKX? Have Seiko announced this or is that speculation?

Given the history and success of the SKX, it would be a strange for the “new SKX” to be reborn as a Sports watch rather than a certified 200m ISO 6425 Pro Dive watch?

Anything to confirm as such? Seiko tend to announce these things?

The new reborn 5 range certainly has a lot of choice and with the 200m affordable watches now well catered for by Seiko, aI am happy to accept the SKX is dead ..... Until of course it is again reborn.

Not so strange, Seiko are here to make cash profit.

Seiko cancelled the SKX line then in the gap released the mini turtle,
It is based on for our five iconic Seiko diver design cues, but it is still only another diver that looks to attract fans of 62MAS,Turtle and Sumo.

Then they released the SRPD at a slightly higher retail price,
side by side they are evidently 90% identical to SKX
and were in appearance built for the old market demographic - young fresh watch buyers with an eye for near perfect design (thank you for the assistance Rolex).
Said buyers rarely needed the Shock resistance/peace of mind that 200m gives, or they would 'rock' a G-Shock
And Seiko only wanted a budget replacement for the cash cow that SKX are (like the Fiesta for Ford).

They then re-released the SKX only with a retail price doubled.

Hope there's no under the bridge responses,
people should judge from their own findings, but before that learn from quality Standards like Jeffrey McMahon and Urban Gentry and the like.
1st Dec 2019
O.

TGV, Jeffrey McMahon, Mark at LI, Seiko and others are all sources I check in with regularly, which is why I asked the question as I was surprised to see it stated as fact that the Seiko Sport 5 is the replacement for the SKX?

Have any reliable sources confirmed this or is it still speculation?
Edited by: "Baldricky" 1st Dec 2019
1st Dec 2019
Baldricky:
O.

TGV, Jeffrey McMahon, Mark at LI, Seiko and others are all sources I check in with regularly, which is why I asked the question as I was surprised to see it stated as fact that the Seiko Sport 5 is the replacement for the SKX?

Have any reliable sources confirmed this or is it still speculation?

Wow, I want expecting this much suprise,
The word fact has many things that create the noun - verifiable truth or reality.
The fact is based on appearance, evidence shown and matter.
For some reason when you Google said question, other people are suprised when many solid sources say it.

I hate it when HUKD turns in to a chat,
so I will say take it up with yourself, you decide whether the facts are there.