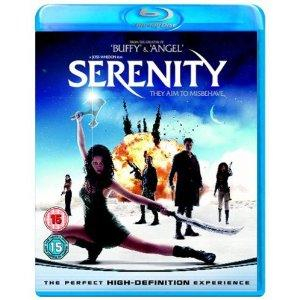 Cracking price for a very good film,
Available at both Amazon and play £5.49

Beloved television cult director Joss Whedon (Buffy The Vampire Slayer, Angel) makes a spectacular first foray onto the big screen with Serenity, the cinematic adaptation of his wildly popular but short-lived sci-fi series, Firefly. A mix of space western, comedy, and drama, Serenity follows captain Malcolm "Mal" Reynolds (Nathan Fillion) and his ragtag crew as they trade their way around the edges of civilized society. Of particular interest are two passengers they take on, Simon and River Tam (Sean Maher and Summer Glau), a brother and his telepathic sister on the run from the corrupt governing Alliance. As notorious former members of the anti-Alliance opposition, Mal and his crew make it difficult for Simon and River to stay hidden. Everything goes completely awry when a government assassin is sent to retrieve River. As Mal is forced to choose between his close-knit crew and the brother and sister newcomers, it becomes apparent that River harbors both a dangerous secret and astounding fighting powers, and Mal decides that discovering the truth about what she knows might just be worth his time.

Many of the film's action sequences revolve around Summer Glau's martial arts skills in her portrayal of River. Glau prepared for her role with Hong Kong stuntwoman Ming Lu, as well as stunt coordinators Chad Stahelski and Hiro Koda, and as a result performed nearly all the stuntwork herself. In addition to the stellar stunts, realistic graphics, and an often haunting score, the film's actors display a rare chemistry that brings viewers both into their lives and into a possible version of humanity's future.

Misleading statement as it is actually the same price at Play

My bad, i was using find dvd as a price comparrision and play wasnt showing as having stock on there.

Not sure you can do that as the Play deal has already been posted but, hey, it should be more about advertising good deals than playing forum politics. This is always a problem when Amazon do their price matching and somebody then posts that as a new deal.

Serenity preowned 75p
19th Apr 2012
good movie. ordered thx
22nd Apr 2012
I watched couple of years ago, did nothing for me at all! However just watched firefly, which i really grew to love ... so guess I should try this again!