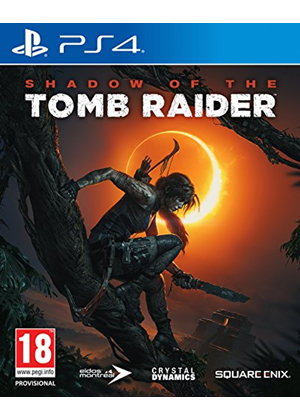 PostTweetShare Share with WhatsApp Share with Messenger
Community Updates
Base.com DealsBase.com discount code
If you click through or buy, retailers may pay hotukdeals some money, but this never affects which deals get posted. Find more info in our FAQs and About Us page.
New Comment Subscribe Save for later
8 Comments
7th Dec 2019
Morning! Is this the last Tomb Raider so far and if so how does it compare to the other 2.
Many thanks in advance.
7th Dec 2019

Of the new ones, the first one great. The second is apparently brilliant. And the third just falls short of that apparently. I played the first and I currently have the second. They are brilliant. I personally am just getting a bit bored of doing the same stuff, but it's just because I'm getting older and preferring different games.

Love your username!! ‌ That's great thank you for your info there. I played the 1st one aswell and thought it was great, and played the second ( not as good as the 1st, quite glitchy for me anyway so this is the one I need to play. Smashing! you're a star. I was going to buy this but have just managed to get hold of Star Wars for £35 quid, ( second hand ) so will play that then sell on and hopefully not loose too much money.P.s Really appreciate your work there as I had no idea which one I had not played.
Edited by: "mrman007" 7th Dec 2019
7th Dec 2019

I've not had any glitches so far. Maybe it's been patched, if you played it early on? And I've not completed Rise of, so it's hard to say which I prefer. They're both similar to be fair.

Decent price. I miss the days when I had time to play, complete and sell a game before losing too much money. I tend to wait now and just buy games cheaper but I've obviously got a huge pile of shame now that I'll never get round to. I got Tomb Raider (the first one) for Christmas three years ago along with Witcher 3 and I still haven't started it. It's because it's a huge epic game and I'm trying to clear some of the backlog before I jump in so I can go straight through And I prefer games that I can drop in and out of easily, like Forza, FIFA, Wreckfest, Spiderman.

lol, I can relate to the backlog of games. I have actually stopped myself now. ( not easy, especially when you see ask Amazon misprice ) I miss the Tesco direct misplaces!!! The £30 xbox and extra controller and game was just one of the biggest mistakes I have ever seen. ( and they went through with the orders ) absolutely obsence!!! That sir was a gooooddd day for HUKD'ers not too good for Tesco direct!!!
7th Dec 2019

I've almost stopped myself. I've cut down hugely. I only buy games that have offline multiplayer (Overcooked, Fire Pro Wrestling) but I also used my doubled nectar points to get God of War and Horizon Zero. It would have been a waste not to buy them lol. Before this I'd set myself I target that I had to finish Rise of TR before getting either haha so I'm determined to finish it before starting any others lol.
I never saw that deal. I have just order an digital Xbox One for £87. £50 more than the cost of a controller to get a second console for another room and free up some hard drive space! That said, it's been delivered to the wrong person, so I'll have to wait before I get it
7th Dec 2019
Tempted but I have a lot of stuff to play as is.