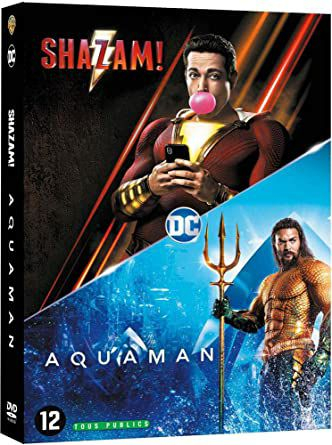 We all have a superhero inside us, it just takes a bit of magic to bring it out. In Billy Batson’s (Angel) case, by shouting out one word - SHAZAM! - this streetwise 14-year-old foster kid can turn into the adult Super Hero Shazam (Levi), courtesy of an ancient wizard. Still a kid at heart - inside a ripped, godlike body - Shazam revels in this adult version of himself by doing what any teen would do with superpowers: have fun with them. Can he fly? Does he have X-ray vision? Can he shoot lightning out of his hands? Can he skip his social studies test? Shazam sets out to test the limits of his abilities with the joyful recklessness of a child. But he’ll need to master these powers quickly in order to fight the deadly forces of evil controlled by Dr. Thaddeus Sivana.

An action-packed adventure that spans the vast, visually breathtaking underwater world of the seven seas, “Aquaman” reveals the origin story of half-human, half-Atlantean Arthur Curry and takes him on the journey of his lifetime—one that will not only force him to face who he really is, but to discover if he is worthy of who he was born to be…a king.
PostTweetShare Share with WhatsApp Share with Messenger
Community Updates
ITunes Store DealsITunes Store voucher
New Comment SubscribeSave for later
5 Comments
10th May
Really enjoyed Shazam, I think its the title that puts people off, I nearly didn't watch it as I thought it was a little kids film. Pity it couldn't have kept its original Captain Marvel title
10th May
Aquaman is the dumbest, most overlong, ridiculous film I've seen in a long time. 7/10.
10th May

I found your critical review and respectable rating out of ten, conflicting. 8/10.
10th May

Lol, I never said those were bad things
10th May

This is nostalgia for a non existent past. The comic has been called Shazam! for almost fifty years. It's the character that used to be called Captain Marvel.