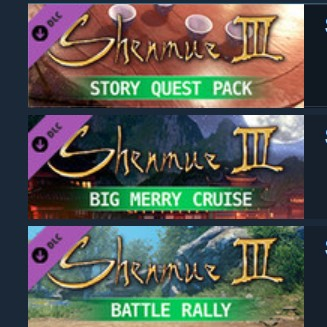 DLC1 Story Quest Pack
One day, Ryo encounters Zhang Shuqin - a subordinate of Zhu Yuanda, who had helped Ryo out in the past. Just as Ryo thinks that he's renewed an old friendship, he learns that Zhang has been kidnapped. But by whom - and why?

DLC2 Big Merry Cruise
A new cruise ship has arrived in the Niaowu harbor. Various types of entertainment can be enjoyed aboard the ship, as well as challenge missions which can only be played here. Also, new outfits for Ryo can be obtained by clearing mini-quests encountered onboard.

DLC3 Battle Rally
A battle race set in Bailu is about to begin! The three contestants engage in battle while racing their way through the course. Reach the finish line in first place to acquire awesome items.
PostTweetShare Share with WhatsApp Share with Messenger
Community Updates
1 Comment
Post a comment