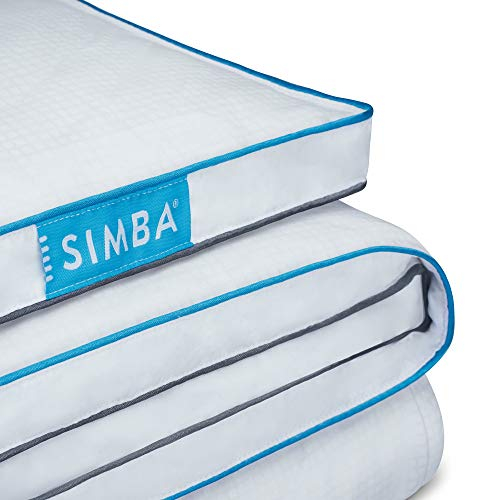 Probably the cheapest Superking down duvet on the market while this price lasts.

These were originally sold at £345 - a ludicrous price, but a steal at £85. As sold by John Lewis and other reputable retailers originally, but these are old stocks being sold off by the manufacturer at very low prices to clear.

Two versions were sold on Amazon - this one (duck down) and a microfibre version. Amazon have merged the reviews for the two types, which is pretty silly given the huge difference. All the reviews for this version are 5*, bar one, and that's 4*.

Our Hybrid Duvet with OUTLAST actively regulates your temperature, helping you get more of the deep sleep you need to feel fully refreshed. 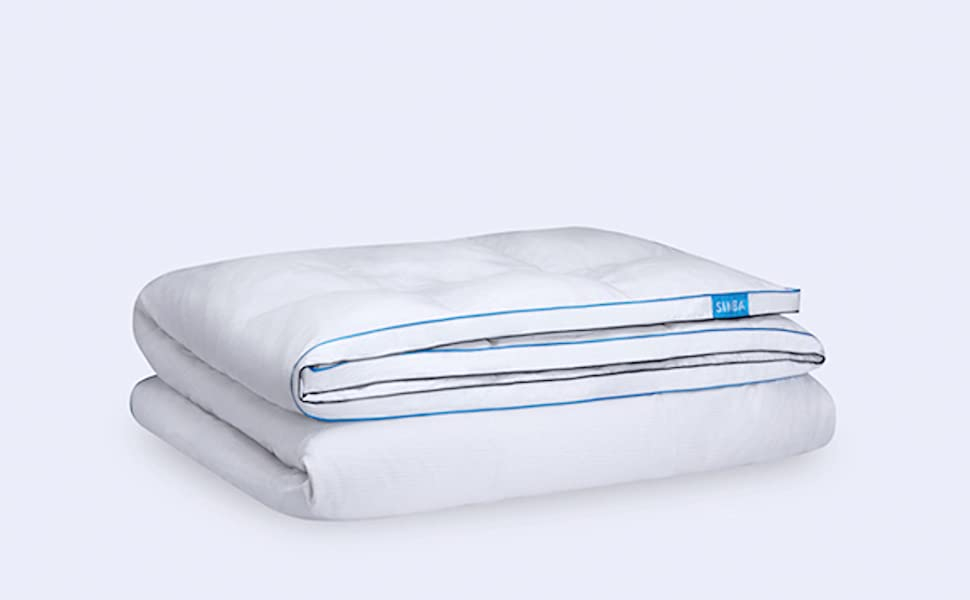 Duck down, and feathers have been used in the best bedding for years, and as you know, the more down, the softer, warmer and lighter the duvet. We used a combination of 90% duck down and 10% duck feathers to bring you the cosiest, most breathable and comfortable duvet.

One side is made of OUTLAST fabric, initially developed for NASA, to protect astronauts from temperature fluctuations. Today, the smart material adjusts to your body temperature to ensure you’re never too hot or too cold, providing the most advanced proactive heat management technology in a duvet.

The other side of the cover is made of 100% cotton, offering unbeatable comfort. With over 30 years of combined knowledge and experience, Simba has crafted a duvet that is cutting-edge, soft to the touch but also naturally beautiful, simple to clean and long-lasting.

Treat yourself to a Simba Hybrid Duvet, engineered with the latest innovations and using carefully selected materials.


Stay Warm in the Early Hours 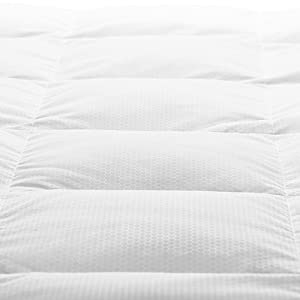 Pairing luxurious materials with sophisticated technology, the Simba Hybrid Duvet contains a magic ingredient called OUTLAST - developed by NASA to protect astronauts - that helps you get more of the deep sleep you need to feel fully refreshed – and bounce out of bed in the morning.

When you touch OUTLAST the first thing you notice is it’s noticeably cool. So when you get into bed it feels fresh - like having crisp, clean sheets every day! So if you hop into bed too hot, it’ll quickly get your body to the best temperature for falling asleep.

OUTLAST is a ‘phase change’ material, which means it actively responds to the temperature outside. So when you’re too warm it absorbs heat to cool you down. But if you get cold it releases heat to warm you up. OUTLAST will keep you at the right temperature all night. 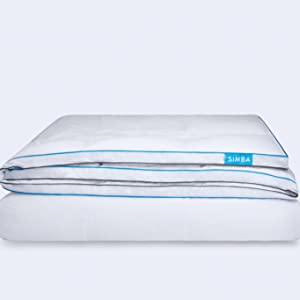 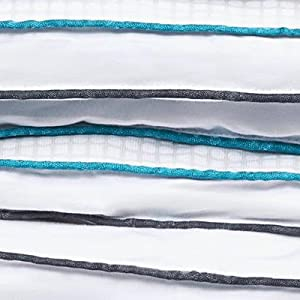 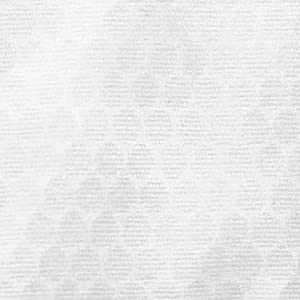 300 Thread-Count Cotton - The Simba Hybrid Duvet is made with the care and attention and passionate design philosophy attached to all Simba products. That includes making it with luxury 300 thread-count cotton that’s incredibly soft to touch and yet really long lasting.


A Border that Breathes - Another little detail that makes a difference is our box border with double piping. This helps you see which side of your duvet features OUTLAST (the blue side). But it also lets air flow through the natural filling of the duvet, keeping it light and airy.


OUTLAST is a 'phase change' material, which means it actively responds to the temperature outside. When you're too warm it absorbs heat to cool you down. If you get cold it releases heat to warm you up. It also has an official Space Certified Technology seal of approval. Basically it's pretty cool. 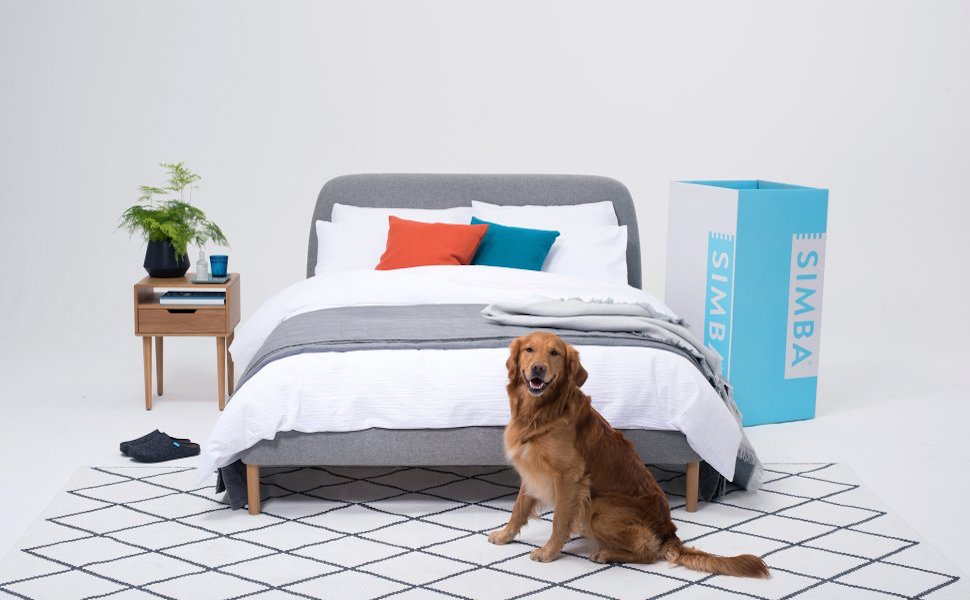 Simba's Company and Product MissionSimba is a British innovator bedroom brand, disrupting the global sleep market with one perfect mattress sold directly to consumers, the award-winning one-type-fits-all Hybrid mattress. Our mission: to simplify your sleep, using the latest technology and data to make revolutionary products that adapt to your body.
PostTweetShare Share with WhatsApp Share with Messenger
Community Updates
Amazon DealsAmazon discount code
New Comment SubscribeSave for later
28 Comments
2nd Jul
Why are duvet so expensive ? Which is more comfortable and not heavy
2nd Jul
What tog rating is it meant to be equivalent to?
2nd Jul
Interested in this but like a very light low tog duvet, is this any good or likely to be too hot?
2nd Jul

What tog rating is it meant to be equivalent to?

Why are duvet so expensive ? Which is more comfortable and not heavy

This isn't expensive for a duvet! It is however awful. Hot as hell. No heat escapes. Read all the amazon reviews that arent 5* and they all say the same.

For reference we now have a pure silk duvet (as in the filling is 100% mulberry silk- You don't even want to know how much that was) but it keeps us warm in the coldest part of winter and cool when it's 30 degrees outside. The silk duvet is the only one I've ever owned where I've not felt the need for a separate summer and winter duvet.
Edited by: "stave84" 2nd Jul
2nd Jul

More like 10.5 million in my experience lol
2nd Jul
Hybrid. They'll try anything.

I've noticed that JL has been linking with a lot of cheaper manufacturers. So just because JL sell it now doesn't make it good.

£80 for a Hybrid quilt. My 10.5 cost me about twenty quid and it's the best I've bought and I've had some expensive ones.
Edited by: "LanzaJet" 2nd Jul
2nd Jul

Comparing a down quilt with a £20 polyester fibre cheapie is rather like comparing a £4 cooking wine with a top end one though.
2nd Jul
This a summer duvet for those wondering about toggage
2nd Jul

I've had quilts £100 plus. The £20 one is the best I've had for me. Washes and dries easily too. Plenty of cheap wines in expensive looking bottles.
Edited by: "LanzaJet" 2nd Jul
2nd Jul

Personal choice, isn't it. Natural materials such as down are always going to be more expensive than plastic fibres. They're also much more breathable and less sweaty.
2nd Jul
Can you post a link for where you bought your silk duvet? And, yes, I'd def' like to know what is a fair price for a king size silk duvet?

Too many different Tog duvets, v. bored with too hot/too cold palaver - time for the middle ground 😴
2nd Jul

Not in my experience. I use merino wool topper over mattress and have a £150 Tempur pillow but I get on better with micro fibre quilt and merino wool throw if I need extra warmth. But yes you are right it is personal choice. We are all different in many ways.
2nd Jul

You're misinterpreting the Amazon reviews. I thought that at first and decided to give it a miss, but when you separate out the reviews relating t this down version you'll find not one single review mentioning overheating. All but one are 5 star, and the other's 4 star.

All the negative reviews relate to the polyester microfibre version Amazon have lumped together with this natural down version.
2nd Jul

No i mean we had the down one, and I felt like i was roasting to death
As an aside I'm not sure about the amazon reviews but I don't see that its only the synthetic version people are complaining about - some of them mention the down coming out of it. Ours didn't shed down but it sure as hell cooked me. We still have it as a spare for when the silk one is being washed (it takes literally 3-4 days to dry).
2nd Jul

You're still misinterpreting the reviews for some reason. The review you mention talked of microfibre! There is not one negative review or reference to overheating that relates to these down duvets.
2nd Jul

See my reply above - plenty of awful reviews for the down filled one (examples below) & my comment was based on personal experience.

Lets try again.... I personally have the down version. The down version is far to hot & sweaty for me & my (usually complaining it's cold) wife.

I've also linked reviews mentioning heat and the down version specifically for you in a reply above.
2nd Jul

I’m afraid you still haven’t worked out how to sort the reviews between the two types covered. You need to sort them to show only these: show only reviews for Material Type: Outlast

Your replies are infuriating. I do know how to use amazon thanks. The reviews I linked haven't selected either type but mention feathers and down coming out of the duvet. Whilst I appreciate it doesnt say "Outlast" on those ones, the ones mentioning feathers coming out can only be the version containing feathers!

I also own the Outlast version of this bought annoyingly for a lot more than £80. I am stating my own opinion of a product I own and have used, and found vastly too hot which is why I said "in my experience 10.5 million" and didn't say "amazon says 10.5 million."

Your opinion that I can't tell the difference (i can) does not in fact invalidate my own opinion of a product. Your opinion that the people who haven't selected a sub-type for their review, but who have mentioned "Outlast" in the review, or feathers falling out, or both aren't valid is equally irrelevant. Clearly those people have the outlast/down/feather version & not the stratos. They also think it's too hot.
2nd Jul

Let’s agree to differ, shall we. The very fact that you chose a gross exaggeration of 10.5 million for your estimate of the TOG rating suggests a certain lack of objectivity.

You’re entitled to your view of course, but it’s out of sync with all the reviews of this particular down duvet, and perhaps a little misleading for anyone looking for a duck down superking duvet at probably the lowest price available anywhere. Not everyone can afford £300 for a silk one.
2nd Jul
Ha Tog Wars loving it
7th Jul