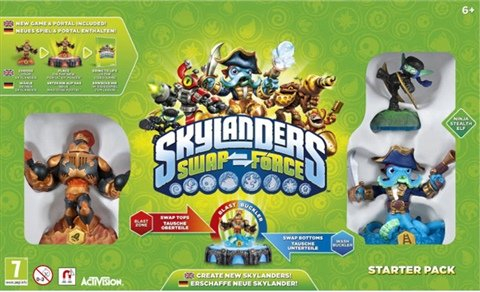 Skylanders Swap Force is the third part of the Skylanders series, and the follow-up to the incredible Skylanders Giants and the BAFTA-winning Skylanders: Spyro's Adventure.

Embark on an exciting new adventure with the Skylanders and the Swap Force. For generations, the Swap Force protected the volcano that replenishes Skylands' magic. That is until an epic battle caught them in an eruption that blasted them apart, sent them to Earth and gave them the ability to swap powers. Only you can mix and match their tops and bottoms, put them on the new Portal of Power and help save Skylands.

Features:
PostTweetShare Share with WhatsApp Share with Messenger
Community Updates
CeX Deals
If you click through or buy, retailers may pay hotukdeals some money, but this never affects which deals get posted. Find more info in our FAQs and About Us page.
New Comment Subscribe Save for later
3 Comments
16th Nov 2019
Good find they have a load of different ones, it’s £3 p&p
17th Nov 2019

Good find they have a load of different ones, it’s £3 p&p