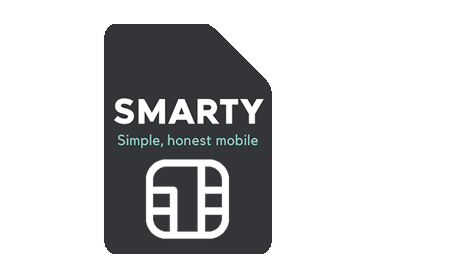 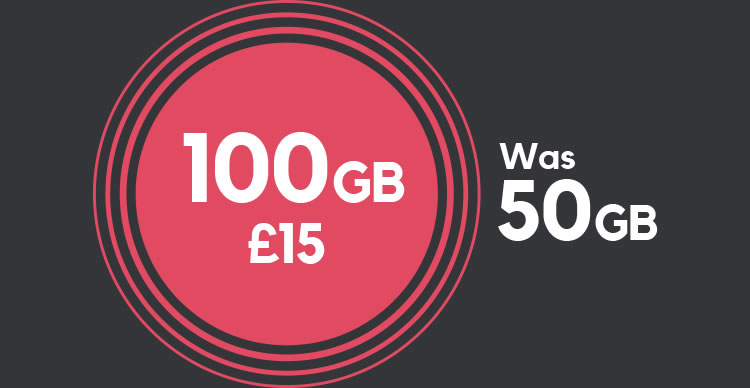 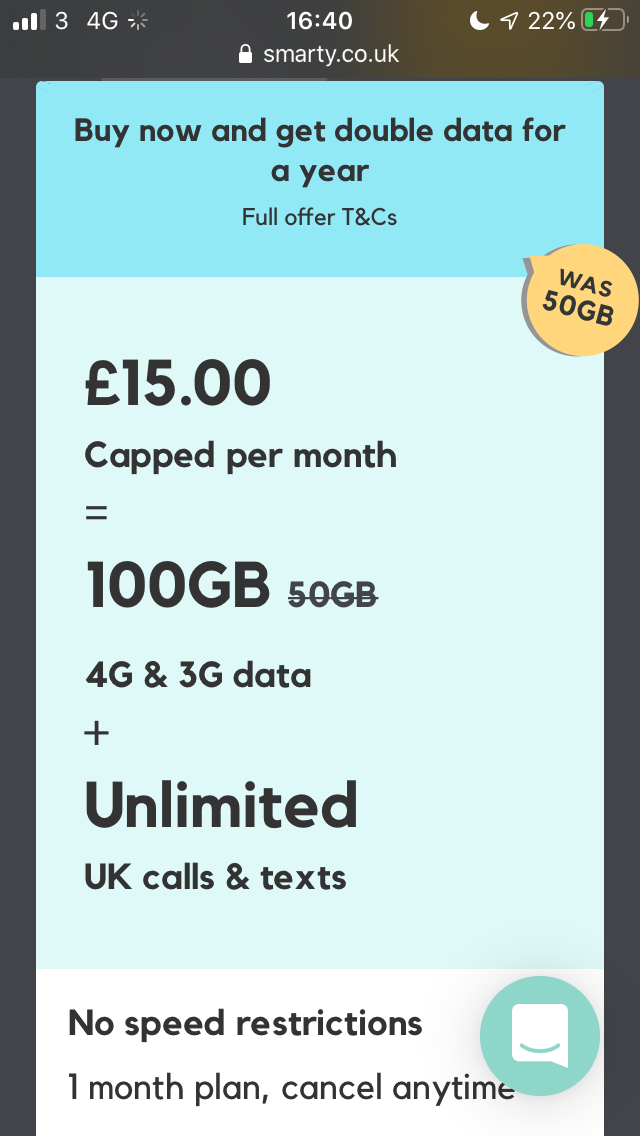 No credit check, buy your 100GB bundle & sims in the post, activate sim on arrival & use sim to activate bundle

cdn.smarty.co.uk/fil…pdf
PostTweetShare Share with WhatsApp Share with Messenger
Community Updates
14th Jun
Eligibility:
4. To be eligible for this Promotion, you must:
(a) be resident in the UK and over 16 years old;
(b) be a new SMARTY customer who accesses a Decision Tech website during the
Promotion Period, finds the applicable offer and clicks the link to access SMARTY’s landing page;
(c) purchase the Eligible Plan online on SMARTY’s website during the Promotion
Period;
Broadband Choices Deals
New Comment SubscribeSave for later
37 Comments
14th Jun
This is using the Three network.
14th Jun
Can I use this with my laptop and download and stream movies??
14th Jun

Can I use this with my laptop and download and stream movies??

Yes you can, the full data allowance can be used for tethering.
14th Jun

Can I use this with my laptop and download and stream movies??

Yes, as long as you get reasonable speed.
14th Jun
Is this any good for beeg?
14th Jun

Is this any good for beeg?

help.smarty.co.uk/en/…ons
14th Jun
I am on 3 and they offer wifi calling do SMARTY offer this?
14th Jun

I am on 3 and they offer wifi calling do SMARTY offer this?

I am on 3 and they offer wifi calling do SMARTY offer this?

I am on Smarty and they do not say they support it but occasionally of late in my phone notification area I see Volte calling. Perhaps they are testing it
Edited by: "freezing77" 14th Jun
14th Jun
I KNOW it's 3 network, but is the connection and speed ok on Smarty?
14th Jun

I KNOW it's 3 network, but is the connection and speed ok on Smarty?

Both are coming apparently, ID has them already, inhouse Three sister Superdrug Mobile will be next

“Eligibility:
4. To be eligible for this Promotion, you must:
(a) be resident in the UK and over 16 years old;
(b) be a new SMARTY customer who accesses a Decision Tech website during the
Promotion Period, finds the applicable offer and clicks the link to access SMARTY’s landing page;
(c) purchase the Eligible Plan online on SMARTY’s website during the Promotion
Period;”

Decision Tech is part of MoneySupermarket Group, it owns many comparison websites including B Choices
Edited by: "CockOfTheNorth" 14th Jun
15th Jun
Personal experience speaking as someone who drives a lot in rural area’s (midlands). I switched to smarty from three as they were cheaper and I found my signal much worse. Internet speeds were rather poor with many blackspots. My three signal had also been poorer in recent years. (Was with them for 4 years). Only stayed with them for 2 months. That said cracking price if your in a decent area.
Edited by: "Gavin_East" 15th Jun
15th Jun

Not really sure how that could be - I thought they were on the same network? Hmm...
15th Jun

I drive the same area’s every week, I was with three long enough to know exactly when I hit blackspots etc and when my signal was poor. While I cannot obviously comment on how good or bad a network is for everyone I know exactly how it was for me. I don’t know how either but I know it was worse than when I was with three. Worse enough for me to justify spending £20 with EE a month instead :/
15th Jun

can you change to this from an existing 50gb plan

Assume it’s PAC out then back in - so yes, as a new customer
15th Jun

Voxi, Smarty, Giff Guff all have MVNO status even as 100% owned subsidiaries of the main network, you may get less priority on the network when individual base stations are saturated with connections to devices, that’s why they MVNO’s don’t have VoLTE as that gets priority access to that band & (slower speed) coverage. Even EE payg doesn’t have access to the full EE network, which is shockingly taking the irony to another level.

Smarty are to launch VoLTE.

VoLTE is usually on 800MHz most countries, pushing calls to VoLTE gives better call quality, keeps higher bands for speed & speeds up the folding of 2&3G bands to 4&5G by means of 2/3G closure - many networks in many countries have already killed 2/3G bands off for better 4G/LTE+ offerings https://www.hotukdeals.com/visit/comment/41095358/16431503
15th Jun

Problem is it's not just networks, it’s the hardware (mobile/MiFi/router) & it’s supporting bands can compound the problem, and vice versa. Unlocking a phone is one thing, it supporting every band your device can access from the network base stations is another, add in MVNO second class status on the network and it can all get pretty murky coverage.

At least 999/112 works on any network signal available regardless of what sim is in your phone.
Edited by: "CockOfTheNorth" 15th Jun
15th Jun

Assume it’s PAC out then back in - so yes, as a new customer

It’s annoying, my uncle signed up to the 50gb deal three days ago his number changed this morning. I don’t think he’d be prepared to go through porting our and in again

Well maybe they will be nice, certainly I’ve found overseas staff generally more willing to do missed promo applications to accounts than most U.K. based staff that act like your defrauding them and putting their job at risk by asking, drama queens.
15th Jun

Exactly!if you don’t ask nicely you don’t get nowt

Isn’t it ? Did you send them a link to this deal on broadband choices ? I just checked and it’s still live

Live chat again and when they say it’s not available send that link, see what they say smarty.co.uk/


when I google ‘Smarty 100GB’ the first link is directly to Smarty with expiry next week in T&C link to double data promo
Edited by: "CockOfTheNorth" 15th Jun
15th Jun

I basically said what a shame and how do I get my pac, they were then able to magically add it
15th Jun

Let me try to explain - credit to whomever it was on HUKD who told me!

Smarty apparently do not have access to band 20 (800Mhz) - this is the slowest, but widest coverage band (hence generally used for VoLTE). This can explain 2 things, one good one bad:

The good: mobiles are dumb! They select a band based on strongest signal, not fastest data - if you have a faster alternative to band 20, this makes Smarty faster! Particularly of use in a fixed position data device (e.g. 4G router). This explains Smarty faster than Three examples.

Unfortunately the "what are speeds/coverage on [any network] like?" question is akin to the question "what is the local independent butcher like (without stating the exact location)?"! In some areas he/she has the best meat for miles, in others he/she may be known as 'the gristle shop', while in others he/she may have cracking prices, ok/good products, but only one disinterested spotty oik serving and it takes 2 days to get served.
Edited by: "jnm21" 19th Jun
24th Jun
Does anyone know if these work in a Mobile WiFi router, or does it have to be a phone?
2nd Jul

All sims work in all devices now (EU net neutrality ruling led to OFCOM getting ready to act, shock horror, so companies, I believe it was only 3, agreed to allow it 'voluntarily')!
Edited by: "jnm21" 2nd Jul
10th Jul

Great explanation although I should just add 'the local independent butcher' may prefer 'they' to he/she.
11th Jul

This is a family site - no talk of meat cleaver accidents!

Point taken (and they is less key strokes)! Would 'one' be (jolly well) acceptable?