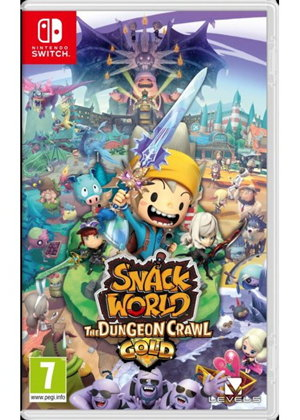 Posting this because I think it's both a decent price but also to raise awareness in case it wasn't on your radar.

It's a lovely game from Level-5, the same developers that did Fantasy Life which is the most similar title they've done to this game, and of course Professor Layton, Ni No Kuni and Yo-Kai Watch.

The game has been out in Japan for a while and has scored a quite impressive 35/40 on Famitsu. 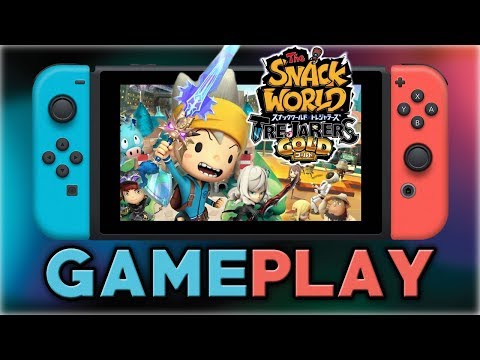 What is SNACK WORLD: The Dungeon Crawl?

Become a heroic adventurer in this roguelike RPG, crawling through dungeons in your search for rare treasure, on a mission to seek revenge against the villainous Sultan Vinegar that violated your village! You can even tag along in teams of up to four to take down tenacious tyrants!

You flop, inches from being a stiff, at the gates of Tutti-Frutti. You remember nothing...but at least you have fabulous new friends to adventure with!

You Are the Crawler of Your Own Dungeon!

Customize your hair, eyes, mouth, body, EVERYTHING into an avatar that best suits you, before heading out on your adventure!

Outfit yourself with "jaras"—weapons, shields, healing tonics, and status-buffing colognes with randomized parameters that can be shrunk down for ease of carrying—and switch them on the fly based on the baddies you're battling!

"Snacks" are snapshots of quirky creatures and kooky characters that you can summon to your side in battle. Collect and trade snacks and jaras with your real-life friends...if you have any.

Bag Booty to Be the Star of Tutti-Frutti!

The more you achieve on quests, the more you're bequeathed with chests! Each quest has varying conditions, with ultra-rare items up for grabs!

Lend a Hand to the Locals

Wake up Sloe White; aid the girl group Spicy Galz; help out a...vegetabulldog or a crock ness monster?!? Be the all-around good guy in side-splitting side quests!

High fantasy and high tech collide in this fourth-wall-breaking RPG with a modern twist for gamers of all generations!

What's With the GOLD?

The GOLD version includes both expansion packs and other downloadable content from the original Japanese release of the game, free of charge!
PostTweetShare Share with WhatsApp Share with Messenger
Community Updates
Base.com DealsBase.com discount code
New Comment Subscribe Save for later
5 Comments
8th Jan
Thanks for the heads up, looks really good, definitely want to check this one out
8th Jan
Definately on my list for sure but have xenoblade chronicles, zelda breath of the wild, Mario, pokemon sword and fire emblem to get through!
8th Jan

I got too many games to go through as well, but I just can't help myself.
8th Jan

Toxic ain't it haha, I sold most of my ps4 games and now hooked on my switch
8th Jan
Oooh!! Level 5! Thank you I didn't realise they were behind this- suddenly it's become an insta-buy