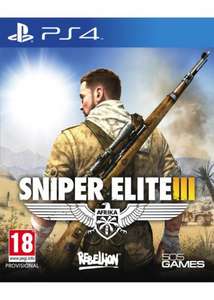 Featuring a greater focus on player agency/choice and expansive environments filled with opportunities for distinct play-styles, and set in the exotic yet deadly terrain of North Africa during World War Two, Sniper Elite III sees American OSS agent Karl Fairburne deep behind Nazi lines, providing crucial sharpshooter skills as the Allies battle Germany’s fearsome Tiger tanks across the Western Desert.
But it’s not just the famed Afrika Korps that Karl has to worry about. He soon uncovers German plans to build a “wunderwaffe” (wonder weapon) with the power to crush any Allied forces in its path, and turn the tide of the whole war.
Features:
· Observe. Plan. Execute. Adapt: Expansive environments allow the player to choose how they complete the mission, offering non-linear multi-routes, and more verticality than ever before, offering the freedom to take out the enemy by your own design.
· Relocation: A sniper always needs an exit strategy. Search the varied environments to create and discover opportunities that suit your play-style: sniper nests, ambush locations, alternative approaches, sound masking and trap setup. Prioritise your targets to maximise your advantage and use shadows and darkness to remain unseen by the Afrika Korps, or relocate to keep your prey guessing.
· Environment: The North African battlefields of WWII provide great visual variation, significantly different from any other sniping title before it, allowing for much longer ranged shots. Play amongst mountain ranges and huge flat plains; bustling townships and cities, and remote village settlements.
· Improved Afrika Korps AI: Clear cues for engagement and detection and a rebuilt AI system emphasising squad roles and tactics make the Afrika Korps smarter and more challenging, while allowing the player more meaningful choices. Backed by a variety of vehicles from Jeeps to Panzer Tanks, the Afrika Korps are a force to be reckoned with.
· Weapon & Character Customisation: Gain XP and sniper ranks from both single and multiplayer progression to unlock over 40 new and unique customisation parts and build the ultimate rifle that best suits your mission and play-style. Customise individual load-outs and store them for both multiplayer and single-player engagements.
· Improved Human Kill-Cam: Now shows even greater detail including the human circulatory system and complete muscle layer.
PostTweetShare Share with WhatsApp Share with Messenger
Community Updates
29 Comments
Post a comment