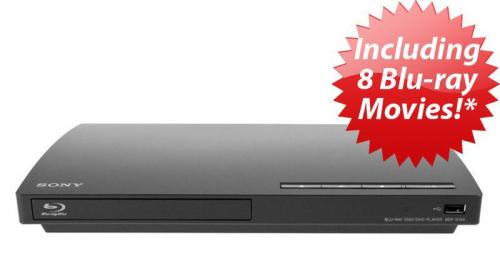 Was instore only but now available online too. Also sign up to VIP and get a £10 Voucher (free to do)

With 8 Blu-ray films including Green Zone, Michael Jackson's This Is It, Battle Los Angeles, The Adjustment Bureau, Hop, Twilight New Moon, Spider-Man 3 and 2012.

If you're looking for a compact but fully functioned Blu-ray player then you need look no further than the Sony BDPS185.

With its tiny dimensions, the BDPS185 will fit neatly and unobtrusively into spaces that full size players won't go. It's especially handy when partnered with smaller TVs in tight spaces. Despite its small size, the BDPS185 isn't fiddly to use. In addition to the comprehensive remote control and Xross onscreen display, the main functions are on easily accessible buttons at the top of the player.

It may be small, but this compact Sony Blu-ray player has many of the functions of its larger siblings. Perhaps most importantly, the top quality picture and sound are still present. Playback quality of all formats is every bit as good as you'd expect from a Sony, with Sony's Precision Drive technology lending a hand to correct scratched or warped discs. As ever, the full 1080p output and HDMI interface give stunning levels of clarity and digital HD surround sound for an unparalleled cinema experience.

It also comes complete with Sony's BRAVIA Internet Video access. Connect up with your home network hub, and you'll have access to one of the widest and most satisfying range of applications. Favourites include the hugely popular BBC iPlayer and YouTube, plus there's also Sony's own Music Unlimted and Video Unlimited. These give access to a massive range of both HD videos and music on demand. With a front-mounted USB socket you can also connect your own media device and watch video/photos or listen to music via the Blu-ray player.

Small in size but full of features, the Sony BDP-S185 is the ideal mini Blu-ray player.
PostTweetShare Share with WhatsApp Share with Messenger
Community Updates
Richer Sounds DealsRicher Sounds Discount Codes
New Comment SubscribeSave for later
27 Comments
23rd Aug 2012
Hummm usb socket to access your media, does this have that stupid Sony protection in it?

sony.co.uk/pro…185
23rd Aug 2012
This maybe good value for a blu ray Sony but not good value in the blu ray market when you can buy a LG 3D blu Ray with WifI, USB ( record and play back incl Divx,) Smart phone App for remote control, Plug in Playback Hard Drive, full upscaling, DLNA streaming, plug in Router and play both 3D and std Blu Ray all for £90
Edited by: "iscom" 23rd Aug 2012
23rd Aug 2012

That the Standard (recommended) retail price and even at that price is good but at pixmania.co.uk/uk/…tml its only £85. . I have not posted it as i know some people don't like pixmania but the bottom line is they are the cheapest and I have never had any problems with them so not posted as not worth the Hassle but think you All must agree the LG offers great value

Does it do Lovefilm?

Yes
Amazon buyer quote. ." . The apps are amazing. There's a free channel with the latest movie trailers, cinema, coming soon, DVD etc..., facebook, youtube, a weather channel, Love Film, Netflix, both of which offer hours and hours of streaming content (subscription required which is around a fiver a month.) There's a concert channel (also free) and Blinkbox (you can buy new films and television episodes - for example, the Big Bang Theory and True Blood including episodes that have only just aired on television), and there's a free section with lots of favourites.). . "
Edited by: "iscom" 23rd Aug 2012
23rd Aug 2012

Can the LG play region one anyone know?

deleted266295
24th Aug 2012
A pity that it took so long for Blu-Ray to come down in price, now I only use a media player to play files on my TV, Sad as Blu-Ray had potential.

deleted595935
24th Aug 2012
This really isn't worth it. There are better players out there at this price - even 3D ones - and the included films are universally dire (except for the half-decent Green Zone). Cold for me.
24th Aug 2012
Have this, it does have Lovefilm but NOT Netflix. The UI is very slow - good if you have a lot of patience or just want it for blurays!
24th Aug 2012

Just a quick note. .there was a software update issued on 08/08/2012 maybe this will bring your player up to date

not with 8 disc offer but v cheap direct from sony