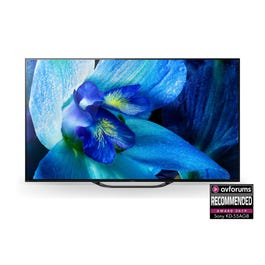 Take the next step up in picture quality, with the Sony Bravia KD-55AG8 OLED TV.

Picture brilliance comes as standard with OLED
Backlighting technology is a thing of the past with OLED. Instead of using various arrays of LEDs to light an LCD display, OLED uses over eight million self-illuminating pixels for sensational image quality. With self-illuminating pixels, you get outstanding contrast. Blacks are far deeper than LED displays and corresponding whites much brighter. For the ultimate in realism, OLED is where it’s at.

HDR support, including Dolby Vision
HDR maximises picture quality, bringing detail to the darkest areas of the picture as well as making the overall image look more life-like than ever. As well as HDR10 and HLG formats, this Sony is also compatible with Dolby Vision. Dolby Vision optimises the HDR format to give quite simply the sharpest, most accurate images possible. Very much an industry standard, Dolby Vision continually adjusts the picture for the most remarkable realism.

Sound from the screen
When you’re at the cinema, most of the sound comes from behind the screen – giving the perfect sync between sound and vision. Featuring Acoustic Surface Audio technology, this Sony 55 inch TV replicates the cinema. By using twin actuators at the rear of the screen, the whole surface acts as one, cohesive speaker. Backed up by downward-firing speakers, the KD-55AG8 delivers a focused, seamless sound.

OLED style and two-way stand
OLED doesn’t just produce class-leading visuals, the screens also happen to be super-slim. Sony enhance the natural good looks of OLED with a minimal bezel and discreet, matte black metal stand. The neat stand fits in two positions. Either, use it conventionally, bringing the TV as close to the surface as possible. Or, reverse it, raising the TV to give clearance for a soundbar.

Control your TV with Amazon Alexa or Google Assistant
Connect up your Amazon Alexia device and you get access to wide range of voice control options. Alter the volume, change the channel or input and more – all just by asking Alexa. Alternatively, connect a Google Home and use the Google Assistant to control the Android menu and find your favourites.

Make TV easy, with YouView
YouView is a popular innovation that brings together live and on demand TV in an effortless, intuitive way. The simple menu page lets you easily find live or catch-up programmes, without having to open separate apps.

See the OLED difference for yourself, with the Sony Bravia KD-55AG8.
PostTweetShare Share with WhatsApp Share with Messenger
Community Updates
Richer Sounds DealsRicher Sounds Discount Codes
New Comment Subscribe Save for later
11 Comments
11th Feb
Stunning TV but I would wait for the price to come down before buying. The 2020 models will be out soon enough so this will likely drop in price.
Edited by: "burgo1" 11th Feb
11th Feb
This or the LG C9? Think the C9 supports Gsync for PC gaming now?
11th Feb

This or the LG C9? Think the C9 supports Gsync for PC gaming now?

If you're going to hook a pc up to it for gaming then the C9 is the best option. If you don't game and want a TV purely for movies/shows then the choice isn't as clear.
Edited by: "burgo1" 11th Feb
12th Feb
£1250 over Christmas, so I would never pay over that.
12th Feb
Had both, C9 clear winner. Paid a lot less just before Black Friday last year. Not a good price at all (but maybe best price now, so O/P right to put it up!)
12th Feb

Yeh I remember you saying in another thread about the problems you had with the Sony, you definitely had a dud/lemon panel. Not read about anyone having the same issues you had
12th Feb

Glad and sad at the same time, cos when it worked it was lovely. A lot of other benefits with the C9 though - I love the magic remote! Surprised others haven't followed suit
12th Feb
After speak to Sony apparently no further updates on the software Orieo 8.0. Therefore will be out of date as soon as you have bought it. It’s a shame as mentioned c9 is close but the Sony just tops it with picture quality.
12th Feb

Is the lack of updates a significant factor?
12th Feb
Yes it should be. Remember the updates to the software improves the performance on your TV usually just like an iPhone. The AG9 will continue to receive updates and that’s because it has a faster processor that can cope with the Release. So when you are trying to get on Netflix or YouTube in a years time it will be a lot slower compared to the AG9. But the mere is a price difference. Also the HDMI 2.1 will become more common. Not trying to put anyone off it’s a great TV but it’s expensive compared to the C9. As mentioned personal choice - picture vs updates/gaming. If it went to £1200 serious consideration just be give solely on the picture it provides for everyday tv and movies. Note it’s not Dolby Atmos audio. It’s a Sony equivalent. I’ve done extensive research as I’m debating Sony vs LG. It’s a divided opinion on who you speak to
12th Feb
Thank you