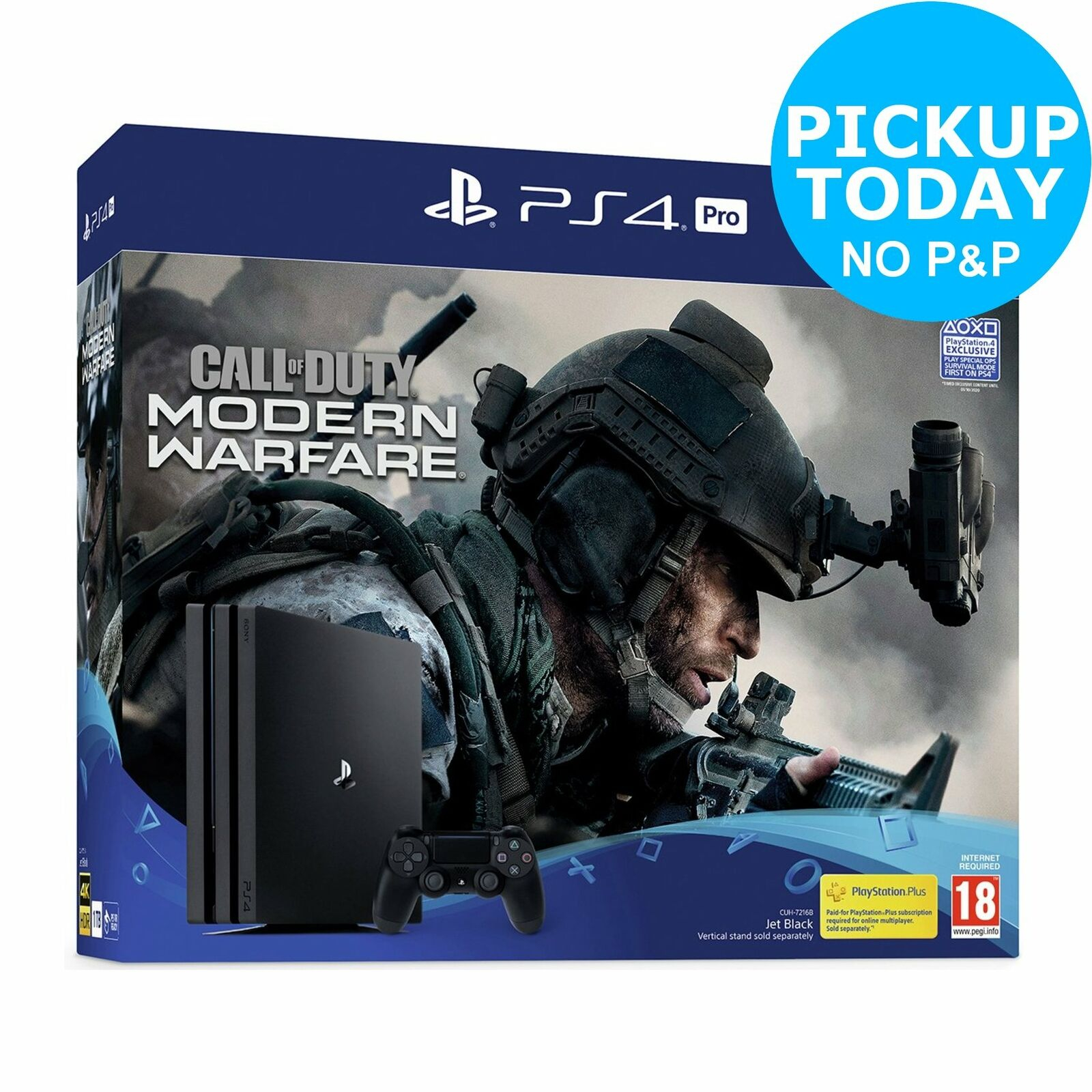 Decent price for this PS4 Pro bundle with Call of Duty Modern Warfare, use code PROSPER10 to bring down to £242.99. Stock looks okay at time of posting. Free click and collect or delivery is £3.95.


Call of Duty: Modern Warfare. The stakes have never been higher as players take on the role of lethal Tier one operators in a heart-racing saga that will affect the global balance of power. Call of Duty: Modern Warfare engulfs fans in an incredibly raw, gritty, provocative narrative that brings unrivalled intensity and shines a light on the changing nature of modern war. In the visceral and dramatic single-player story
campaign, Call of Duty: Modern Warfare pushes boundaries and breaks rules the way only modern Warfare can. Players will engage in breath-taking covert operations alongside a diverse cast of international special Forces and freedom fighters throughout iconic European cities and volatile expanses of the middle East. 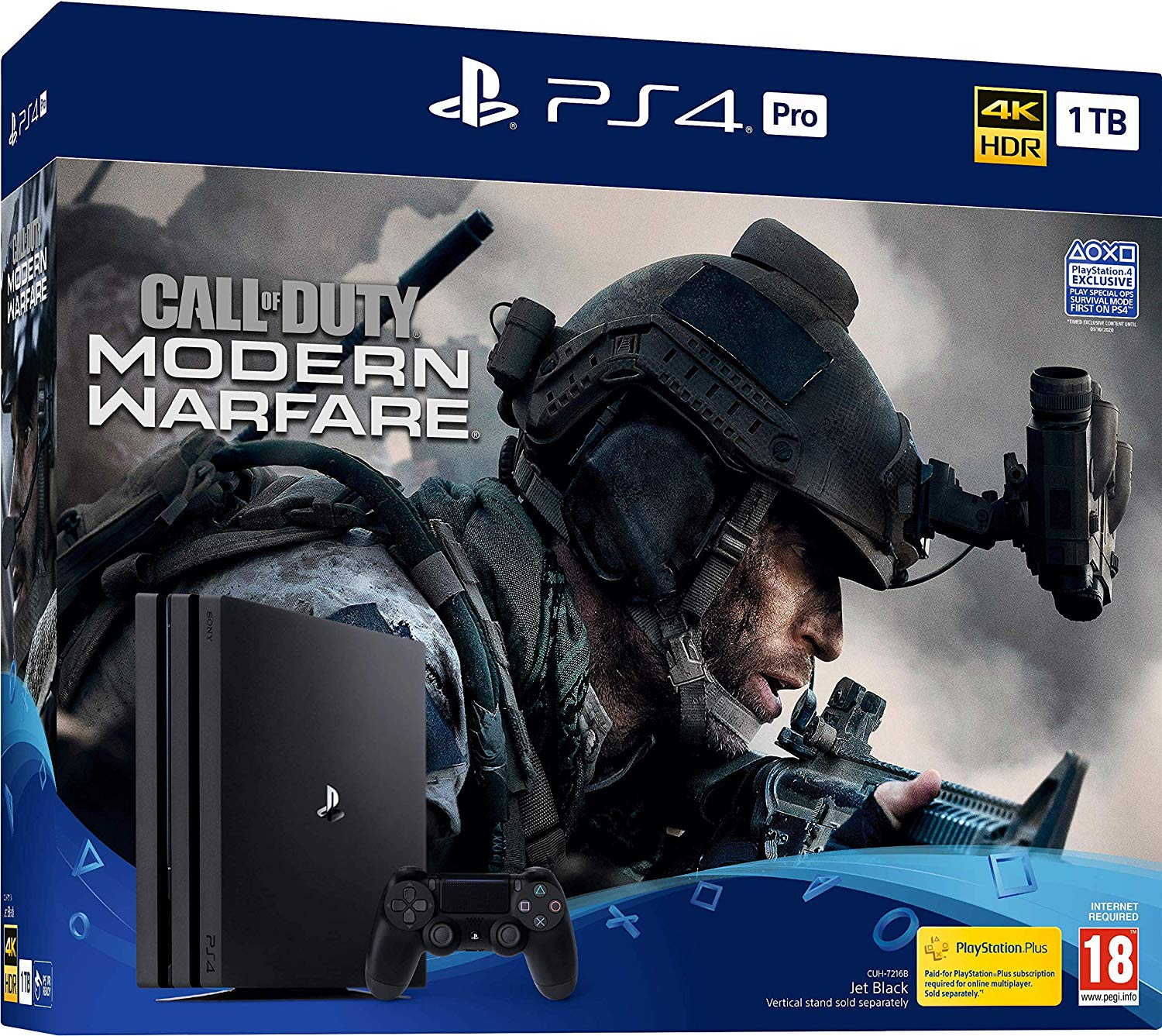 PostTweetShare Share with WhatsApp Share with Messenger
Community Updates
EBay DealsEBay discount code
If you click through or buy, retailers may pay hotukdeals some money, but this never affects which deals get posted. Find more info in our FAQs and About Us page.
New Comment Subscribe Save for later
Top comments
10th Dec 2019
I mean that's got to sting a bit.

We have a winner.

I think they may have sold out. Short lived in so.

Hmmm checkout isn’t working for me 🥴

I don't think so. Maybe an hour tomorrow , but code expires soon

code expires at 10am, stock is there its just an issue with the ebay page currently

I think so. Give it a go mate.

i just did mate. It’s ordered online or I could have reserved at any of my local stores (though I’d rather not carry a PS4 Pro on my train home...)
10th Dec 2019
Anyone care to explain what’s brought this on?

Sweet. I did 24h tracked one for couple of £ , but I messed up .. I have bought the one from Argos a 246 with cod , then I couldnt miss this as I wanted for so long , so now I gonna have 2 console and I really hope I can send the Argos eBay one back, otherwise im in trouble.
10th Dec 2019

Tomorrow there is ps state of play, they may announce price drop , it could be this reason?
10th Dec 2019

I understand, I thought you were saying you missed the deal. Seems they’ve got a lot in stock though.

eBay are weird with refunds/returns, no easy button like Amazon. What you want to do is find the “Contact Seller” option. It should be somewhere in your order history. Then just say you’d like to cancel the order. I’ve done this before and there is 100% no problem with it. They’ll just email you back saying it’s been cancelled and your card refund will be back soon.

Apparently only seller can cancel an order. Let's see. I want to see if is really brand new sealed
10th Dec 2019

More than likely a week only promotion for 25th anniversary I reckon, cant see why they'd drop the RRP now when systems are still selling full price.

Or maybe it's a Christmas promotion which will be better.
10th Dec 2019

Yeah i ordered that:) shocking price!

i also ordered it just got to explain it to the wife now that it will be best bet as she wont have to listen to my old day one release PS4 sounding like its trying to take off (the fan sounds like a jet engine i have my headset on most of the time so i am buying this for her sake)
Edited by: "marra85" 10th Dec 2019
10th Dec 2019
Hi, iv just got a new 4k tv, i currently have a ps4 slim, will the graphics be alot better or is it not really worth it, cheers.
10th Dec 2019
Gone for it! It’s not going to get cheaper than this.

Yes, ive seen it but no 4k tv myself, seen Mates and alot better than mine

i purchased with 2 mins to spare, ill try it side by side, if its not miles better then its either up for sale or going back, cheers.