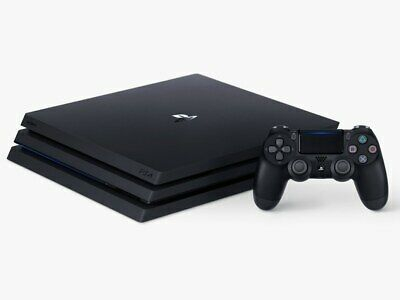 WHAT IS IN THE BOX

Injecting extra richness, the PS4 Pro console will heighten your gaming experience thanks to its advanced processor and increase in graphics to enable highly detailed, upscaled 4K/HDR gameplay and Ultra-HD media streaming. Like the updated PS4, the Pro comes with the remastered DualShock 4 controller.

The PS4 Pro system is centred around a powerful custom chip that contains eight x86-64 cores and 8GB of ultra-fast GDDR5 unified system memory for speed and strength. The GPU has surged up to 4.2 TFLOP to accommodate the new 4K functionality.

We love streaming our favourite shows and films, however there’s something magical about sliding a Blu-ray disk into your player and preparing to watch as you tuck into snacks, then of course enjoying your film in glorious Full HD. If you‘re lucky enough to have 3D television, the PS4 can also play your 3D Blu-ray disks, for a truly immersive viewing experience.

Smart ports on board

In addition to the standard ports, the Pro features a few that will aid advanced gaming. For example, it's fitted with an HDMI 2.0 port to let it output at 4K resolutions. Even more interesting is that it's built with an extra USB 3.0 port, which is perfect for linking a PlayStation VR.

Sony has made their DualShock 4 Controller more ergonomic and visually-appealing. Not only does the light bar shine through the top of the touchpad, the D-Pad and joysticks have been given an attractive grey make-over. Furthermore, the body is easier to grip, so you’ll game in absolute comfort. This is on top of returning features such as the six-axis sensor and touch-pad.

Engage in endless personal challenges with your community, and share your epic triumphs with the press of a button. Simply hit the Share button on the controller, scan through the last few minutes of gameplay, tag it and return to the game - the video uploads as you play. The PS4 system also enables you to broadcast your gameplay in real time.
PostTweetShare Share with WhatsApp Share with Messenger
Community Updates
EBay DealsEBay discount code
If you click through or buy, retailers may pay hotukdeals some money, but this never affects which deals get posted. Find more info in our FAQs and About Us page.
New Comment Subscribe Save for later
4 Comments
14th Jul 2019
for a refurbished unit it’s around £75 too much...still hot if you want one
14th Jul 2019

for a refurbished unit it’s around £75 too much...still hot if you want one

Where else is selling them cheaper if this is £75 overpriced?
15th Jul 2019
better buying used but newer version from Amazon 'marketplace with RDR2

Where else is selling them cheaper if this is £75 overpriced?

Must not realise its a Pro