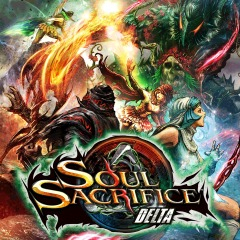 One of the greatest Vita exclusives finally back on sale!

Fresh evil floods the realm of sorcery
When dark hordes of fairy-tale monsters rise, will you execute your bloody duty or strike out in rebellion? In Soul Sacrifice™ Delta you can relive all the epic battles of Soul Sacrifice™, face an army of additional foes and fight for the Grim order of sorcerers for the first time. Choose your path and master your destiny – or Magusar will reign and all will perish.

More blood-soaked chapters
• Battle additional enemies including twisted princesses, the many-legged Cinderella, the monstrous little pigs and toxic Snow White.
• Relive the spectacular quests of Soul Sacrifice™ with remastered battle arenas and monsters.
• Pledge yourself to Avalon, Sanctuarium or join the order of Grim for the first time.
• Fight for your faction in an online struggle for supremacy and embark on multiplayer quests with players from all over the world.

Remember, sorcerer:
• You need a PlayStation®Vita memory card (sold separately) to play this game.
• If you’ve already purchased Soul Sacrifice™, your sorcerer’s experience can be transferred to Soul Sacrifice™ Delta.
• Some of the phantom quests in this game were originally available in Soul Sacrifice™.
• On-screen text: English, French, Italian, German and Spanish. In-game speech: English.
PostTweetShare Share with WhatsApp Share with Messenger
Community Updates
Playstation Network DealsPlaystation Network Discount Codes
New Comment SubscribeSave for later
2 Comments
21st Mar 2018
I've genuinely been waiting AGES for this game to come up on sale. Have some heat!
21st Mar 2018
This game is amazing