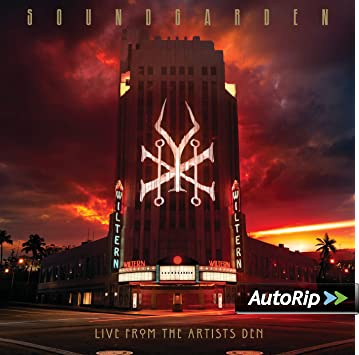 £26.13Amazon Deals
10
Get deal*Get deal*
10Get deal*Get deal*
Posted 20th MayEdited by:"davidfwalsh"20th May
On February 17, 2013, Soundgarden concluded a sold-out U.S. Winter tour in support of King Animal, their first studio album in over sixteen years, with a special Live from the Artists Den taping at the Wiltern in Los Angeles. Soundgarden mixed new songs with classic radio hits and rarities performed live for the first time, in front of a rapturous crowd. The concert has become the most requested Soundgarden show to be released of all-time. The 29 song, nearly two-and-a-half-hour show encompasses the band’s entire legacy of songs, from their early years with “Hunted Down” through their monumental albums Badmotorfinger and Superunknown respectively with “Outshined” and “Black Hole Sun,” and nearly every song from King Animal including “By Crooked Steps” and “Been Away Too Long.” The concert film features 21 songs never released on a concert film, 17 of which have never been released on a concert album, including “Blind Dogs” which is the first-time the band ever performed the song live.


LP1 - Side A1Incessant Mace 2My Wave 3Been Away Too Long LP1 - Side B1Worse Dreams 2Jesus Christ Pose 3Flower 4Taree LP2 - Side A1Spoonman 2By Crooked Steps 3Blind Dogs 4Rowing LP2 - Side B1Non-State Actor 2Drawing Flies 3Hunted Down 4Black Saturday 5Bones of Birds LP3 - Side A1Blow Up The Outside World 2Fell On Black Days 3Burden In My Hand LP3 - Side B1A Thousand Days Before 2Blood On The Valley Floor 3Rusty Cage 4New Damage LP4 - Side A14th Of July 2Outshined 3Black Hole Sun LP4 - Side B1Ty Cobb 2Slaves & Bulldozers 3FeedBacchanal
PostTweetShare Share with WhatsApp Share with Messenger
Community Updates
Amazon DealsAmazon discount code
New Comment SubscribeSave for later
10 Comments
20th May
I regret not going to BST when I had a ticket to see them, and fnm (who I've seen twice)
Edited by: "dlo247" 20th May
20th May
Managed to grab one at this price but it's now shot up to £63.99.

Hope it goes through ok.

Anyone know if this is black vinyl?
20th May
Treble the price now
21st May

Yes this is the black vinyl.
21st May

Don't worry its about 28 quid most weeks just need to check each day
21st May
I saw them support Mudhoney in ‘89...

In my whole life I’d never seen a more beautiful man...
21st May

I wouldn't be mate. The place was full of absolute plums.
Blokes who were complaining about 'being nudged' in the crowd and soppy birds taking selfies in bright wellies who clearly only knew the chorus to Black Hole Sun.

Hyde Park is just about the worst venue for music going and had a load of people there with no interest in the bands, just wanted to be seen at 'a festival'.

Both bands were cracking (Soundgarden played a full Superunknown set) but, like pretty much everything, wasn't in the same league as seeing them in a proper indoor venue with a proper crowd.
Damn shame that was my last experience of Cornell and SG

This, on the other hand!!


I'm gutted my FNM tickets for June are obviously looking in doubt... though I'm sure they'll rearrange for later in the year/2021
21st May
I saw FNM around the same time too, a “we want Chuck” chant started up. ^__^
Also RHCP in the same venue around the same time.

Live gigs are looking in doubt for a while, which is a shame as that seems to be the way bands make their money these days, I’m wondering which bands will disappear now...
21st May

I can imagine I don't think they knew what they had on their hands when they booked the bands. They were giving tickets away for £2.50 at one point I heard.