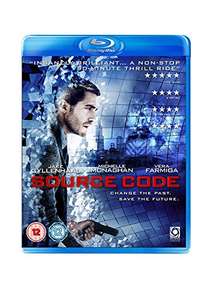 Good price for the Blu-Ray

Description
In his second movie Source Code--a looping, hall-of-mirrors story about a downed helicopter pilot who must revisit the same passage of time--Duncan Jones restores some of the virtues of traditional sci-fi, in which technology is just a framework for human drama and where the efficient sketching of smart ideas has as much impact as any amount of CGI. Such is the case with Source Code, in which Colter Stevens (Jake Gyllenhaal) is suspended in a digital limbo (the 'source code') by his military bosses, who force him to revisit the same eight minutes on board a Chicago-bound commuter train--right before it explodes.

With each attempt to ID the bomber--a satisfying picture puzzle of close detail and shifting perspectives--Colter's growing fondness for the doomed commuters divides his loyalties, drawing him into a battle with the Fates themselves. With shades of 12 Monkeys, Avatar and Groundhog Day, Source Code is also the up-tempo cousin of Jones' debut feature Moon, in which a lonely worker’s right to mortality is also violated by a futuristic organization who, in Moon's case, would like to cut an ethical corner (and the cost of lunar labour).

In the space of these two movies, Duncan Jones has proved he's auteur material and, like the recurring eight-minute sequence at its heart, Source Code feels like the explosion of an exciting new talent--right before it explodes. --Leo Batchelor