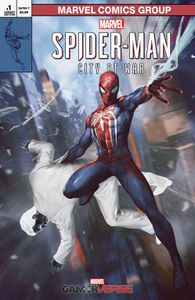 Considering that we have a lot of community members as avid gamers and Spider-man fans , this limited edition skan variant issue 1 comic is worthy of a post. Only 3000 copies ever produced. First prints are already selling for 2 times the price and bound to keep their prices in the future. This comic is based on the popular Spider-man city at war game series. P.s. limited stocks available.

Showered with world-wide acclaim, the blockbuster Marvel’s Spider-Man has everyone’s spider-sense buzzing! Now you can experience the emotional and shock-filled story that takes favourite characters (including Mary Jane, Aunt May, Norman Osborn, Otto Octavius and Miles Morales) and spins them into an all-new and unexpected web of drama, spectacle, and classic Spidey action in the Mighty Marvel Mannerwith more original stories to come!

After years of seeing Wilson Fisk escape criminal prosecution, the wise-cracking web-slinger finally has the opportunity to team with the PDNY to help them arrest his fearsome foe.

But when the Kingpin of Crime is removed from the mean streets of the Big Apple, how will the mysterious Mister Negative’s ascent to power bring Peter Parker’s civilian world and Spider-Man’s superhuman worlds crashing together?

But as for future value? as for the comic collecting market they are so fickle these days especially without a signature and with a lot of the Youth of today have not much interest in Comics, sales are sadly on a decline. So in my opinion although it’s Spider-man, since it’s from yet another rebooted universe unless this one is as successful and long lasting before the next reboot as the last biggest long running spider-man comic series - the ultimate spider-man from the 2000’s, In the future you’ll be lucky to just about get the retail price of the comic back even 20 years from now.

Which ones were they ?
Thanks

£1.00 delivery also includes a board, plastic bag, outer envelope and posted to your house!!! yep i agree