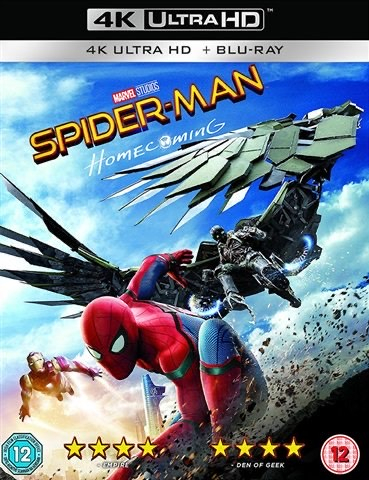 A young Peter Parker/Spider-Man (Tom Holland), who made his sensational debut in Captain America: Civil War, begins to navigate his newfound identity as the web-slinging super hero. Thrilled by his experience with the Avengers, Peter returns home, where he lives with his Aunt May (Marisa Tomei), under the watchful eye of his new mentor Tony Stark (Robert Downey, Jr.). Peter tries to fall back into his normal daily routine - distracted by thoughts of proving himself to be more than just your friendly neighborhood Spider-Man - but when the Vulture (Michael Keaton) emerges as a new villain, everything that Peter holds most important will be threatened.

Special Features:
Over 60 minutes of Bonus Features including:
* 10 Deleted and Extended Scenes
* Cast Gag Reel
* “The Spidey Study Guide” - A Pop-Up Factoid Track
* Unseen Alternate Captain America PSAs
* “Aftermath” - Filmmakers bridge the gap from the Battle of New York
* “A Tangled Web” - Spider-Man’s integration into the Marvel Cinematic Universe
* And more!
PostTweetShare Share with WhatsApp Share with Messenger
Community Updates
CeX Deals
If you click through or buy, retailers may pay hotukdeals some money, but this never affects which deals get posted. Find more info in our FAQs and About Us page.
New Comment Subscribe Save for later
1 Comment
20th Dec 2019
Thanks Op 🙏. Purchased