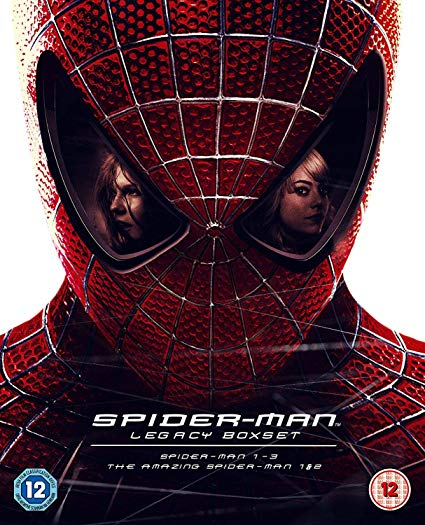 Is the spider man home coming movie included in this?

No. Original 3 and the 2 Amazing Spider-Man movies
6th Jan

Is the spider man home coming movie included in this?

Yes seriously
6th Jan
That alternative version of spiderman 3 makes this a buy alone. Think I may have to jump on this op, thanks for the post
6th Jan

No. Original 3 and the 2 Amazing Spider-Man movies

Thank you kindly for clearing that up for me.
6th Jan

OooOooOoo... do you know what's been changed? I already own these but now I'm intrigued...
6th Jan

No, but I'm Ultra intrigued. I don't want to investigate as it will spoil it I think
6th Jan

I have already seen the film, and that spoilt it. I would rather know if the changes much, and how it changes the film. I've been reading up on it and will not disclose what I have found so that you can enjoy the film independently.

From what you've read, does it make this a good buy?
6th Jan

From what you've read, does it make this a good buy?

If you don't have any of these already, I'd say this is the one to get.
£20 for 5 films, £4 each, is a bargain, especially with digital copies of all of them. I already own Sm1 and Sm2 on iTunes, and have ASM1 and ASM2 on Google Play... so I'm struggling. I've also not many people that would appreciate them as a gift.

The changes made to Sm3 are minimal, and mostly for the better. You'd have to analyse the Theatrical and Editor's Cut in a bit of depth to recognise the effect of the changes but in terms of plot, the story makes marginally more sense.

I don't have any of them, and I think I'm in the minority that thinks the 3rd was probably the best of the 3, if that's improved then I'm jumping. Cheers Mr Nutty
6th Jan

Is there an Editor's Cut for SM1? Do you mean SM3?

as there are no editors and extended cuts for sm 2 and 3 on google it just gives you extra codes for sm1.

to sum it it up

Thanks for explaining.
7th Jan
Just on the editor's cut for SM3 (and trying to explain without spoilers is tricky), it's a few subtle adjustments that don't affect the main problematic scenes of the film (the dance, emo Peter etc). If pushed I'd say it does make the black suit represented as slightly more malevolent. I wouldn't say the editor's cut is better or worse just different.
8th Jan
Thanks OP! Received today and must say it’s really nice! Mainly wanted it for UV codes as I now use Google Play instead of Flixster (what a loss over 200 films)
8th Jan

Apparently there are no codes for the extended or edited films by the way. It was mentioned earlier on in here.